Are clovers worth it? 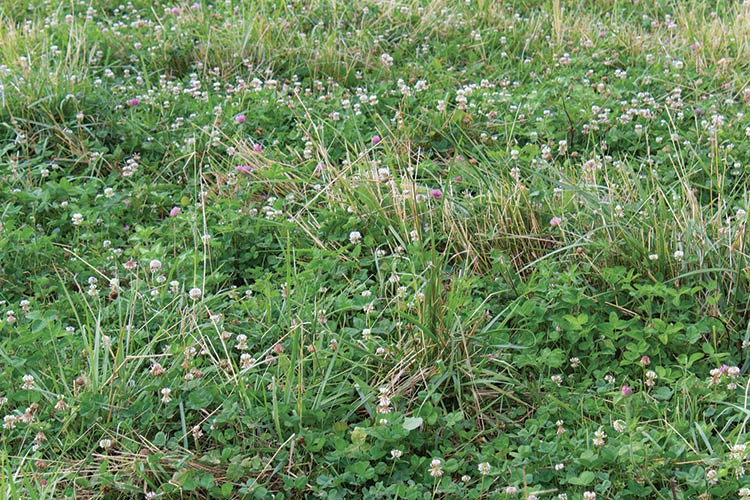 The benefits of clover are frequently extolled. We have all heard the sermons (or preached them).

These are the common exclamations. But, do the facts support these claims?

I was recently asked to speak at the American Forage and Grassland Council’s annual meeting and was charged to reread and review the basis for these claims. In addition, if these claims about clover are true, I was to determine if this leads to a higher profit potential. In essence, I was asked to settle the question of “Are clovers worth it?”

Numerous plot and grazing studies have been conducted over the years, the majority of which were in the 1950s to 1970s. There have been some additional trials in the years since that have confirmed some aspects or addressed knowledge gaps. The benefits and limitations of using clovers are among the most well-researched aspects of forage agronomy. In fact, I found and examined over 130 research reports addressing this topic.

One of the best summaries of the benefits of clover in grass pastures was presented 33 years ago by forage scientists Joe Burns and J.E. Standaert at a joint meeting between researchers from the U.S., Australia, and New Zealand at an international workshop. Burns, a forage agronomist with USDA’s Agricultural Research Service based in Raleigh, N.C., and Standaert, an economist at North Carolina State University, summarized research from 38 different research reports across 19 states.

In those reports, there were 42 experiments where there was a direct comparison of beef cattle weight gains between a grass plus legume pasture and a pure grass pasture with N fertilizer applied. Of those trials, 90 percent reported improved average daily gains (ADG) for the beef cattle in the mixed legume-grass pasture compared to the monoculture grass. The average boost in ADG was 18 percent. 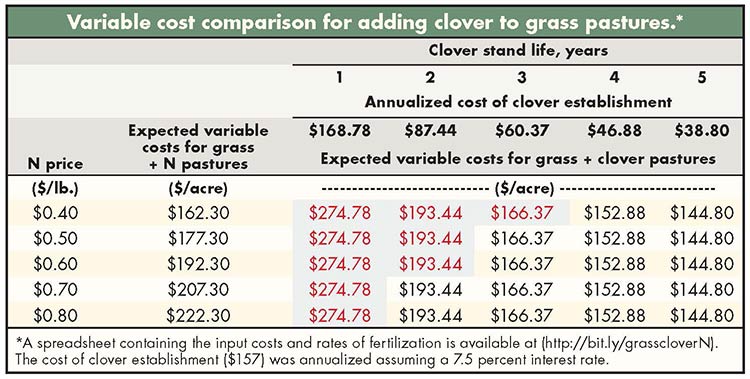 The lack of a reliable improvement in gain per acre is a reflection of the variability in how much contribution the selected legume makes to forage production in a pasture. For every research trial that shows grass plus clover outyields or yields the same as a grass plus N, there is a trial that shows less total forage production in a grass plus clover field. Some grasses are more sensitive than others to competition from the clover component.

Choosing the right combination of grass and clover improves the odds of success, but grass plus clover tends to be riskier in areas with less consistent rainfall, poorer soil conditions, and hotter and more subtropical weather. In fact, recent long-term research at both Texas A&M University and the Noble Research Institute in Oklahoma has shown that mixing legumes in their warm-season, grass-based pastures frequently reduces forage production, the length of the grazing season, and net returns per acre, despite reducing the need for N fertilizer. Cool-season, grass-based pastures are more reliably improved by the addition of clover, especially when that clover has the added benefit of offsetting some of the poor performance associated with toxic tall fescue.

Further, one needs to consider the alternative to growing clover: N fertilizer addition. Well-timed N fertilization generally provides a substantial boost in the amount of forage produced from that pasture. Certainly, that N addition comes at an economic and, in some situations, environmental cost. But, establishing clover is not without costs, too. There is a cost to N, whether it comes from clover or out of a fertilizer spreader.

To compare the costs of grass plus N and grass plus clover, I created a spreadsheet that performs a partial budget analysis. It examines the impact of N fertilizer prices and the longevity of the clover stand (see table). The latest version of this spreadsheet is available at http://bit.ly/grasscloverN, if one would like to download it and make comparisons using their own costs and rates of fertilization.

This comparison demonstrates the sensitivity of the costs to stand longevity and N price. One really needs a stand of clover to last at least three years at current N prices to breakeven.

If it lasts only two years, N fertilizer prices would have to climb from about 45 cents per pound of N today to over 60 cents per pound for the clover to be cost effective. Of course, these conclusions all assume there is no loss in forage or animal production on a per-acre basis. This is likely a safe assumption where cool-season grass pastures dominate, but it is a risky or false assumption in more drought-prone or stressful locations.

This is not to say that clovers are not useful even in these more challenging pastures. Low-cost methods of establishment, such as frost seeding, can substantially improve the economic potential of their use. Clovers can fill gaps in the grass stand otherwise filled by weeds. Legumes managed for natural reseeding may also be a strategy that is advantageous.

Using clovers strategically within the grazing system can have a major impact on reproductive efficiency. For example, there were five studies reviewed in the aforementioned paper by Burns and Standaert where the ADG of the cow was measured. All five measured a significant and reliable improvement in the cows’ ADG, averaging 0.5 pound per head per day more than the grass plus N comparison.

Some studies since that review have shown that such a boost in cow weight gain translated to greater pregnancy and calving rates. This is encouraging, as even marginal gains in reproductive efficiency in a brood herd can result in major profitability improvements.

In summary, mixtures of grass and clover generally enhance individual animal performance and usually sustain animal productivity per acre at levels that are similar to or slightly better than grass pastures fertilized with N. The economics of using grass plus clover pastures varies from site to site, but the chances of profitable clover use are greatest when grown in cool-season grass pastures, a stand life of three or more years is expected, and N prices are moderate to high.

Even in less than ideal conditions, clovers can provide additional benefits to the system that make them economically viable. Thus, the answer to the question “Are clovers worth it?” is “Usually, but not always.”

This article appeared in the February 2018 issue of Hay & Forage Grower on pages 8 and 9.

Frost-seeding season is on the move Next