Built from the ground up

By Lauren Peterson
The author was the 2017 Hay & Forage Grower summer editorial intern. 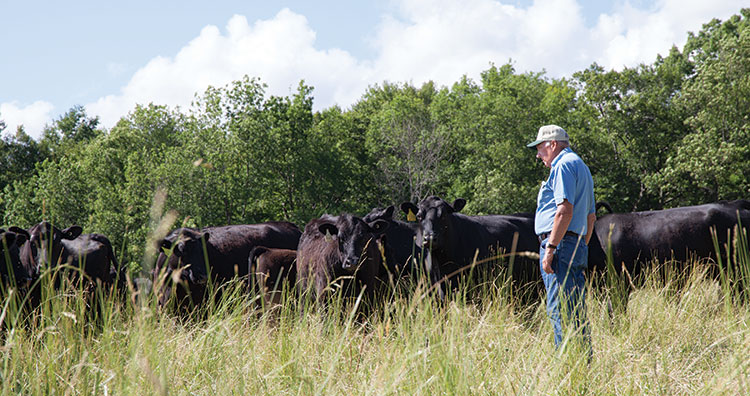 Gary Voogt examines his herd of registered Angus. The 2009 NCBA president is passionate about his cattle, pastures, and the environment. He’s not shy about offering his opinions on any of the three.

“It’s a farm, not a date. Come whenever,” came the response from the subject of our next photo-farm tour stop.

Candid, down-to-earth responses like this can be expected from Gary Voogt, past president of the National Cattlemen’s Beef Association (NCBA) and owner of Voogt Farms in Marne, Mich.

Voogt served as president for NCBA in 2009 and was the first Michigan producer to hold that distinguished position. In the previous seven years leading up to his election as president, he had served as an NCBA officer. Voogt has traveled all over the world, promoting beef and giving interviews, but spent most of his time as president in Denver and Washington, D.C., where he met with President George W. Bush and testified before Congress.

This cattleman’s road to the Hill was atypical, to say the least. Voogt worked as a civil engineer for 41 years and created his farming legacy from scratch. He and his wife, Shirley, started out with just three calves and rented their pastures to a neighbor after purchasing the farm in 1967. Since that time, he has acquired a wealth of knowledge and opinions about cattle, forages, and enhancing the environment.

“We were not farmers and the farm wasn’t passed down to us,” Voogt recalled. “It turned out to be a second job, not a hobby job.”

A purchase of three registered Hereford heifers for their young son and the decision to show purebred polled Herefords began the road to their current success. They started raising their own purebred cattle and switched to Angus, now owning one of the largest registered Angus herds in Michigan.

Voogt’s success is rooted in his passion for producing quality seedstock. The farm is now made up of 170 acres of pasture and hay ground with an additional 30 rented acres. On this land, the Voogts have registered bulls, heifers, and around 70 cow-calf pairs that are rotationally grazed and supplemented with locally purchased grain.

“In order to have yearling bulls ready for our customers to use at grass turnout time, and for the yearling heifers ready to breed ahead of the cows, we time the artificial breeding to calve at the worst time of the year in Michigan — January and February,” said the Michigan Cattlemen’s Association’s 2006 Purebred Breeder of the Year. “We think calving in the cold weather is healthier — everything’s frozen, and there’s no mud,” Voogt added.

To ensure that this challenging task goes smoothly, the Voogts tighten their calving interval through intensive synchronized estrous management. The cows are then bred using artificial insemination. Being primarily in the purebred Angus bull business, the farm uses the freshest genetics and retains only the best bull calves to clean up those cows that didn’t conceive.

Calves are weaned at 5 to 6 months and sold on an internet auction in September. Voogt sells 60 percent of his heifers to feedlots, keeps 25 percent back as replacements, and the remaining 15 percent are kept for freezer beef.

Take half, leave half

Raising quality stock takes quality pastures — a fact that Voogt knows all too well. Voogt rotationally grazes his cattle on 8- to 14-acre paddocks within his larger pastures. He ensures pastures are uniform in growth to limit weed infestation. 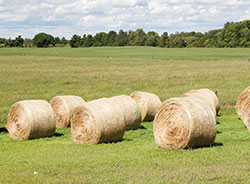 Voogt uses a bale grazing technique to feed cows during the winter. A hot wire limits access.
“I adhere to the rule ‘take half, leave half,’ in terms of when we move cattle to the next paddock,” Voogt stated. “A plant needs to maintain its solar panel. That’s the factory for future growth. If you graze too short, it weakens the roots and they die.”

Not a fan of monocultures, Voogt’s cattle graze multi-specie grass pastures. His 170 acres have not been plowed for 30 years. While he does do some frost seeding of red clover in the spring, his pastures are made up of a variety of legume species, such as white clover and birdsfoot trefoil. In cases where pasture plants go to seed, Voogt will use the cattle to spread and trample the seed back into the ground.

“I believe that each plant species provides unique nutritional characteristics to my cattle. I like to see a variety of plants going through my mower as I cut hay,” Voogt shared.

Watching out for the birds 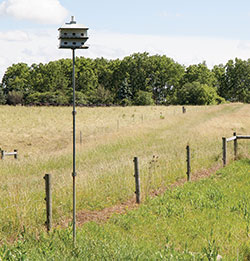 Bird housing and habitat abound on Voogt Farms. Eighty different bird species have been identified on the property.
Cattle aren’t the only creatures on the property. An avid conservationist, Voogt closely monitors the bird population around his farm. To ensure an active wildlife presence, the property contains hawthorn thickets, woodlands, two small ponds, and a bird nesting trail of 23 bluebird boxes.

In the spring of 2016, a comprehensive bird study was compiled on Voogt’s farm, showing the presence of 80 different species, with significant fledging success of the robust savannah sparrow, bobolink, and eastern meadowlark populations. The main goal of the study was to determine if Voogt’s mowing and grazing practices could explain the reproduction success rate of the grassland bird species.

The most common ground nesting hazard is the hay mowing machine. “The mower-conditioner takes no prisoners,” Voogt cautioned. “Once nests are built, there is no mowing pattern that will be successful. The adults can fly out, but they can’t take the nest with them.”

Voogt learned that the bobolinks nest in colonies. Over the years, he has noted which fields the bobolinks favor most, and he mows them first before nesting starts, usually before the first of June, then not again until mid-July. Rather than building nests in the short stubble, the birds learn to use the adjoining rotationally grazed pastures.

“We graze the ground bird nesting pastures last in the rotation,” Voogt said. “The birds and the cows seem to respect each other, and trampling of nests by the cows turned out to be only a mild concern.” Also, his “take half, leave half” method ensures that the birds are left taller residual plant matter that they prefer for cover and perching.

Bobolinks winter in Argentina and summer in Michigan. But their numbers are declining. The Voogt family was thrilled to learn the study found a whopping 35 successful bobolink nests on the farm, and that earned them the Conservation Partners of the Year award from the Saving Birds Thru Habitat organization. 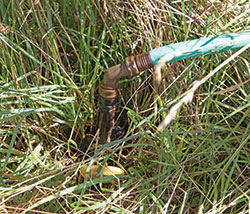 A quick coupler is available in every paddock, which Voogt uses to hook to a portable water/mineral wagon
Using his 41 years of experience as a civil engineer, Voogt gets creative around the farm to improve efficiency and solve problems. In order to ensure that his cattle are no more than 900 feet from water at all times, he created a wagon on skids that can be pulled from pasture to pasture and hooked up by a quick coupler to underground water pipes that are accessible in each paddock. The wagon is easily movable, has a roof to keep water cool, holds minerals, and has fly control rubs attached.

“The cattle will come up as individuals to get water. Any farther than 900 feet and it’s only the boss cow that decides when the herd will be watered,” said Voogt, showing his commitment to animal husbandry.

With vast acreage devoted to feeding his herd, Voogt is also reluctant to buy hay. When it comes to winter feeding, he makes it clear that his cows are working for him and not the other way around.

Voogt has designated a lot for winter feeding near where his cattle are kept to calve and cared for. Round bales are placed in rows within the lot before the snow hits and are adequately spaced to allow for a hot wire to divide rows. Cattle feed themselves throughout the winter as Voogt simply moves the wire from one row to the next when available feed dwindles. 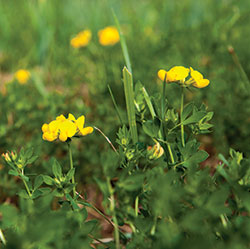 Voogt likes his multispecies pastures. Legumes such as white clover, red clover, and birdsfoot trefoil (pictured) are easy to find.

Surrounded by neighbors, Voogt also found a way to make his winter calving barns and holding area more environmentally friendly. He helped design a sloped catch basin system to collect runoff from the concrete lots. The retained nutrient-rich water and manure is then spread back on pastures to enhance growth.

When it comes to success stories, few are more compelling than Gary Voogt building a cattleman’s legacy from scratch. Upon instilling his own brand of hard work and dedication, his children and grandchildren now play an active role in the daily operation of the farm. With the help of his guidance and the reputation that comes with such a successful seedstock operation, the continued legacy of Voogt Farms looks promising for years to come.

He’s a master hay farmer and educator Next