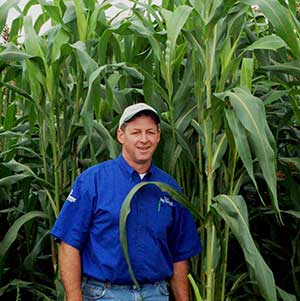 David Hunsberger
If you haven’t dealt with sorghum crops in the past, photoperiod sensitive sorghum-sudans could be a good initiation into the world of multi-cut crops like sorghum-sudan and sudangrass. Sensitive to day length, they won’t initiate flowering until the day length gets below 12 hours and 20 minutes, around mid-September. This provides plenty of harvest flexibility and room for error as the crop carries vegetative quality late into the season. With the enhanced window, you have the flexibility to do multi-cut or one large cut late in the season. As with most crops, sorghum-sudan quality takes a dive with flowering, as the plant builds up its lignin to support a heavy grain head, while sending plant sugars and protein into the grain head to form starches. With the delayed reproduction of photoperiod sensitive (PS) varieties, the plant can put on large amounts of high-quality, digestible vegetative growth. Standability is less of a concern than with the taller forage sorghums, since the plant doesn’t become top-heavy with grain, and can be harvested at the tallest height you’re comfortable with (where you can comfortably manage the amount of material to be harvested and stored. Those who cut later in the season typically direct chop. Because the material will be moister than a soft-dough plant, you’ll have to do a long cut for less weeping. If you cut as long as you can, you’ll disrupt fewer cells. These varieties give you the flexibility of sticking to the normal multi-cut schedule, at about 40 days or 40 inches of growth (whichever comes first), or a one direct cut system. Direct cut works well if you have a window after a later-harvested crop, such wheat for grain, and will fit up to the small grain or cover crop planting window. The flexibility to plant late is critical because the PS varieties, like most sorghum-sudans, have a larger seed than sudangrass or millet, which allows you to plant deep enough to reach moisture if the soil surface is dry. The great advantage of starting out with a PS variety is that if you are new to multi-cut summer annuals, they won’t push you. The flexibility for a quality harvest is there, as long as you are able to handle the higher volume of material, and if it gets big enough that you end up with one big direct cut, you have to be able to work with the higher moisture content. Because of the high sugars, PS sorghums ferment well, but it’s a good idea to add an inoculant. David Hunsberger, regional coordinator at King’s, uses PS sorghum-sudan on his own dairy, along with an enzyme and homolactic bacterial inoculant. He has put some of this material in a vertical silo at 22% dry matter at the longest cut possible and was able to deal with the juicing of the high moisture crop, but highly recommends horizontal storage in an ag bag, trench, or pit silo, and says to be prepared for some seepage.

Tracy Neff, an agronomist at King’s AgriSeeds, notes that the PS varieties in research plots can double the yield of some of the short-season forage sorghums taken at boot stage, sometimes coming in at 25-29 tons at 65 percent moisture, in only 60 days of growth! So managing this high volume of material and whether it will be direct cut must be taken into account. Once it gets to be about 6 feet tall, you probably won’t be able to rake it. If direct cutting, you also don’t want to process it, to keep cell disruption to a minimum.

King’s has two photoperiod sensitive varieties available – AS 6501, and ADV 6504, a new variety with high sugars. These varieties are known for their drought tolerance, which helps with a mid-summer planting. Photoperiod sensitive crops can give the best of both worlds in the way of high biomass minus deterioration of nutritive value, but you will still have to plan for increased plant moisture, watch out for Prussic acid after frost, and be sure you are prepared to handle and store the high volume of material. These sorghum-sudans have their definite advantages because they won’t lignify, and provide the flexibility for multi-cut harvest and late planting after a small grain harvest, but they won’t fit everywhere. We like to think of it as a good way to get customers used to the multicut regime, where you can still get the harvest if you miss it within a few days. Other sorghum-sudan hybrids, growing six inches a day closer to their seed head, run the risk of significantly more lignin if the harvest is disrupted by weather or other unforeseen circumstances. The planned use of PS sorghums for one large direct cut in early fall is definitely not recommended as an amateur move, especially if you’re only working with a discbine. Of course, if customers are looking for superior regrowth and traffic tolerance in a multicut system, we like to emphasize our hybrid sudangrasses. These would also perform better in the grazing scenario.

Get $1 Scoops of Culver’s Fresh Frozen Custard on Scoops of Thanks Day, May 3 Previous