The Price of an Uneven Stand 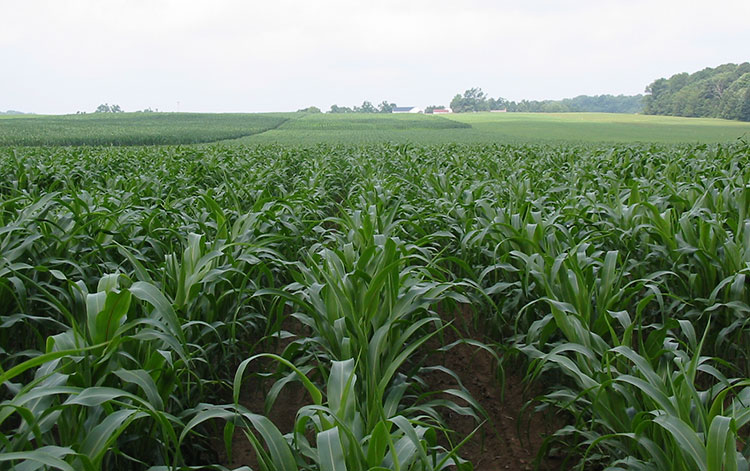 Preparing the planter and the field

A consistent corn stand is a profitable stand. This spring, paying attention to detail and waiting for those optimal planting conditions can pave the way for success.
It’s a good idea to dig up seeds at planting to make sure you have an even and adequate depth, and consistent seed-to-soil contact. Adjust seed openers and press wheel tension if needed. Secondary tillage may also be a good idea to improve planting conditions.
Don’t forget other steps you can take before the planter even hits the field. Prevent planter malfunctions by going over the equipment every year to ensure accurate seed drop. All parts (belts, springs, bearings and bushings) can wear over time and lead to uneven stand populations, poor row closure and uneven emergence. And – this should go without saying - use high quality seed. Don’t mix large and small seeds in the seed box.
Beyond that, there are many components to a successful corn crop, the majority of which you can control. Rapid, uniform germination in warm soils with moisture, where seed is placed at the proper depth and any surface residue is evenly distributed, make for the best likelihood of a consistent and high-yielding stand. It takes 119 GDUs for corn to emerge, and when soil temperatures are less than 50 degrees F, germination and emergence are likely to be much slower and less even. Kernels also need to be able to absorb 30 percent of their weight in water, so a soil environment with balanced moisture is critical. Coulters have to be able to cut through residue well so the seed can make contact with soil in the seed furrow, rather than residue.
In the beginning…
The corn plant’s early life and surroundings set the stage for its yield potential. An evenly emerging stand with uniformly sized plants is more important to later plant and ear development than you might think. Larger, early-emerging plants start with an advantage that only grows over time, and compete with the smaller, later-emerging plants for nutrients, light and water. By the end of the season, the cost of stragglers is apparent in reduced yield, both for silage and grain, and the loss increases the more these late-comers are delayed and the greater their percentage of the stand. Uniform stands from the get-go are especially important in corn because it has less vegetative plasticity than soybeans, but corn hybrids differ in their ability to compensate. Certain corn hybrids can flex somewhat, but early plants won’t compensate for the losses from the latecomer runts.
Again, getting an even stand means hitting field conditions when they are optimal for the corn’s germination and emergence – just enough moisture at planting depth (but not too much) the right soil temperature, and seed-to-soil contact.
The risk factors
One of the main reasons for inconsistent emergence will be variable soil moisture levels in the seed zone, with significant areas where it’s too dry for germination. Working too-wet soil can create cloddy seedbeds that give inconsistent contact with seeds, and the resulting compaction can lead to season-long problems with root development. Planting in wet soil can create sidewall compaction that stunts corn growth and can lead to seed predation. Soil temperatures at the seeding depth can also vary in no-till situations, especially with uneven distribution of residue and cooler soils under residue. Seed that is planted too shallow (less than 1.5 inches deep) is also more likely to emerge inconsistently and lack the root system needed for robust plants. Uneven seed depth is a common problem in high-residue or no-till situations, where coulters may not cut through residue consistently.
Other culprits can be soil crusting, herbicide injury, and insect and disease damage. Another can be intentional – if the grower tries to “fill in”, rather than tearing up and starting over. If any replanting is warranted, the best bet is usually to start over with a consistent stand rather than filling in skipped or lagging plants. These filled in plants won’t contribute much to overall yields because of the early plant competitiveness discussed earlier.
When does interplanting to thicken the stand pay off?
When late plants are at least 3 weeks behind and make up one-half or more of the stand, there is more yield benefit to the latecomers. When they’re in a distinct minority, though, late plants are more like a weed. You can keep this in mind when deciding whether to protect late plants with shields during cultivation – this pays if late plants are in the majority. But if runts make up less than ¼ of the stand, it won’t pay to encourage their survival. If the unevenness is mostly row-to-row, replanting the stand probably won’t do much to replace yield. The costs of the replants have to balanced against the potential benefits of the yield increase from replanting.
In stands with plants at lower populations, later-emerging plants can also make more contribution to overall yield than at high populations, when there would be more plant-to-plant competition and overshadowing from the larger plants. This is especially true of populations in the low 20,000s.
Other problems with runts

Late plants are vulnerable not only to be overshadowing, but also to silk clipping by corn rootworm beetles, which can interfere with pollination and kernel set. Later plants also throw a wrench in grain harvestability because they will have a higher grain moisture than the early plants at harvest. The varying moisture can increase kernel damage and drying costs, and it’s hard to adjust combines for variable ear size. When it comes to silage, grain uniformity of course isn’t a prime consideration, but stunted plants with thinner stalks, smaller and fewer ears, and more barren plants will still drag on both yield quality.
Submitted by:
Genevieve Slocum
King's AgriSeeds Inc.

World Forage Analysis Superbowl to Award $22,000 in Cash Prizes Next