Staying off the bloat boat 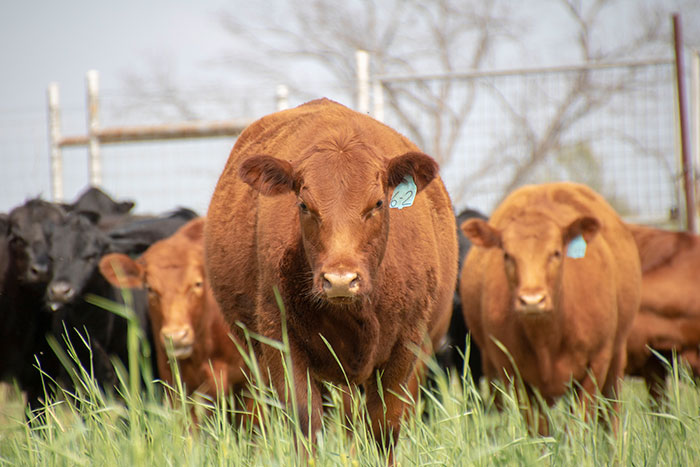 “We manage it as best we can.”

That’s the typical response I get from livestock producers, beef or dairy, when I ask them about bloat issues from their pure or nearly pure legume pastures, especially those comprised of alfalfa and clovers.

Bloat is a curious malady. It can go from a nonissue to a major problem in a matter of hours; this is often the result of environmental factors more so than a change in cattle management. Bloat also seems to be a bigger problem on some farms and not on others even though pasture composition may appear similar.

It’s a sick feeling to come across an animal that is down and suffering from frothy bloat. You usually don’t forget the first time that you have to “stick” an animal with a trocar, assuming it comes to that last ditch effort.

Scott Barao, who manages Hedgeapple Farm in Buckeyestown, Md., often grazes his growing cattle on pure alfalfa. “I won’t say that we’ve never had a bloat case, but with a little common sense you can keep that problem to a minimum,” he says. “We try to make sure cattle aren’t going onto pastures with empty stomachs.”

The digestive process that occurs in the rumen results in gas formation. Normally, that gas is eliminated by eructation (belching). Depending on the diet, a large amount of foam or froth develops in the rumen and inhibits the release of gas, which causes the animal to bloat. This often occurs with high-protein forages such as alfalfa or certain clovers, but can also be problem when lush cereal forages or brassicas are grazed.

Some legumes such as birdsfoot trefoil and sainfoin have a sufficient amount of condensed tannins to inhibit bloating.

“Alfalfa and many clovers are all highly digestible,” says Dirk Philipp, a forage researcher at the University of Arkansas. “Rumen microbes have access to the protein in these forages very easily. When these microbes digest the forage they release gas, which builds up in the cow’s rumen. This gas mixes with liquids, which is how the froth and stable foam develops,” he adds.

Philipp notes that environmental factors also contribute to bloat risk. This is why the cattle may be fine for weeks and then experience a high level of bloat overnight while grazing the same or similar pastures.

“Day temperatures around 70°F coupled with a cool overnight temperature will lead to a higher risk,” Philipp explains. “These are good growing conditions for higher-risk forages. High soil moisture, which leads to high plant moisture, will also increase bloat risk.

Another time when cattle are more prone to bloat is when grazing bloat-inducing plants immediately following a hard freeze or frost.

Prevention is the answer

In spite of bloat risk, many cattle producers routinely utilize pure legume pastures and capitalize on the resulting high-end cattle performance. Here are some of things they do to make that possible.

1. Cattle are put on pastures and left there rather than pulling them in and out at frequent intervals.

2. Cattle are allowed access to dry hay before or during their time in legume-based pastures. They don’t put hungry cattle on fresh legumes with a high bloat risk.

3. When conditions are favorable for bloat (for example, on a morning with a heavy dew or following a frost event), cattle are kept off pastures until moisture or temperature conditions return to normal.

4. Cattle are rotated frequently. As such, they aren’t allowed to graze new, fresh stems and tillers in high amounts.

5. Anti-bloating agents such as poloxalene are sometimes fed. These depress froth and foam formation but add cost if used on a routine basis.

6. Cattle are routinely monitored. This may be the most important complimentary practice.

7. A bloat treatment kit is assembled and accessible. Its contents include a stomach tube or 1-inch diameter rubber hose, a defoaming agent, a bloat needle, and a trocar. Only use the latter in cases of extreme bloat when other methods of treatment have failed.

Pasture mycotoxins? Yes, there are Next