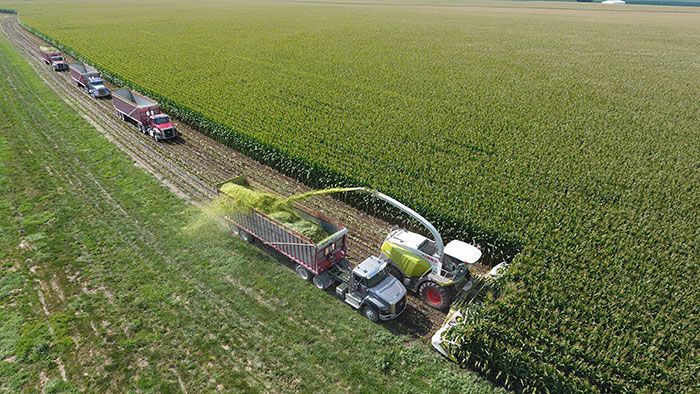 Many years ago, I was told, “Any idiot can make good corn silage.”Perhaps that’s the case or perhaps not; however, it’s most certainly not true if you have your sights set on something better than “good.” I believe that most nutritionists and dairy producers in this day and age would fall into that category.As we look back, the road to excellent corn silage has come a long way in a relatively short period of time. When I started my career as an extension agronomist in the late 1980s, the recipe for corn silage was relatively simple: Pick a good grain hybrid and have at it.As corn silage gained popularity, seed companies began evaluating their hybrid lines for silage performance. It soon became clear that there were both yield and quality differences among hybrids. This led many companies to compile a separate list of their recommended hybrids for silage production.At the same time seed companies began silage evaluations, some universities added silage performance testing to their traditional grain hybrid trials. There was also a noticeable spike in silage feeding trials.During the ensuing years, corn breeders began breeding “silage specific” hybrids, some of these had designer traits such as more leaves; others were more conventional but excelled in silage yield and/or quality. Cargill introduced its first brown midrib (BMR) corn silage hybrid to the market during the mid-1990s.In addition to advancements in plant breeding, it was quickly found that kernel processing could drastically improve animal utilization of corn silage. This innovation took hold in the late 1990s and early 2000s. At first, the processors had to be retrofitted onto existing forage harvesters (mostly pull type), but it wasn’t long before machinery companies offered this option on new machines.At first, kernel processors were deemed effective if they simply cracked or “nicked” the kernel, allowing rumen bugs a “door” to digestion.In 2005, Dave Mertens of the USDA Dairy Forage Research Center developed an approach to estimate how well corn grain was processed within corn silage. Mertens compared this newly developed kernel processing assessment against rumen digestion, finding a positive relationship. The measure, termed kernel processing score or KPS, has since grown in popularity and is held as the standard to evaluate silage processing performance.The kernel processing score evaluates kernel breakage by drying the silage, shaking the dried silage across several sieves, and then determining the starch content that passes through a 4.75 millimeter screen. The goal has historically been to achieve a KPS of 70 percent or better.Change has continuedSince the introduction of improved silage hybrids and the kernel processor, there have been two big game changers for the industry. One has simply been the steady improvement in kernel processors. Design features and larger roll differentials have made exceptional kernel processing possible on all machines, regardless of color. This, of course, assumes they are set correctly. A second huge game changer has come from the discovery that corn silage quality improves as it ferments and beyond.This core finding, which has been confirmed in multiple research trials, has led to the recommendation that enough additional storage is needed to prevent recently harvested silage from being fed. Often, the suggestion is for three to four months of carry-over inventory.The improvement in corn silage quality over a period of up to at least eight months comes primarily in the form of enhanced starched digestibility. To be clear, there is no improvement in neutral detergent fiber (NDF) digestibility. The magnitude of improved starch digestibility over time is often associated with the moisture content at harvest.A second related and important finding is that KPS also improves with time in the silo or silage pile. In fact, KPS is often boosted by 5 to 10 percentage units. This has led researchers and field practitioners to rethink the target KPS on fresh-chopped whole-plant corn.In the August issue of Hay & Forage Grower magazine, both Chris Wacek-Driver (Forage Innovations LLC, Bay City, Wis.) and John Goeser (Rock River Labs, Watertown, Wis.) suggest that a KPS of higher than 60 is adequate for fresh-chopped corn (65 to 68 percent moisture) that will be stored for several months before feeding. This somewhat reduced benchmark will be beneficial in improving harvest efficiency and kernel processor wear.The corn silage story is far from over. There will no doubt be better hybrids in the future and improved machinery for which to get it harvested. “Good” corn silage is no longer a reasonable benchmark for high-producing dairy herds. These days, technology allows us to easily do much better.