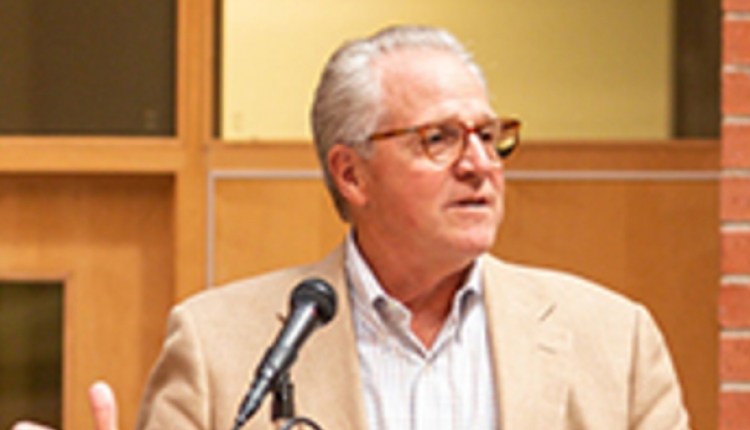 Bill Buckner announces his plans to retire as president and CEO of the Noble Research Institute during an employee meeting in Ardmore, Oklahoma, on Sept. 18, 2018. Buckner will retire at the end of 2018 after leading the organization for seven years.
Bill Buckner announced today that he will retire as president and chief executive officer of the Noble Research Institute at the end of 2018.

Buckner was selected as Noble’s eighth president in 2011 and has led the organization for seven years. “There are no words to properly express the thankfulness I have for my time at Noble,” Buckner said. “Every day at Noble, I have the opportunity to positively impact agriculture and contribute to something greater than myself. I am honored to be a part of the Noble legacy, and I’m excited to see the next chapter unfold for myself and the organization.”

Russell “Rusty” Noble, a member of the Board of Director’s executive committee and founder Lloyd Noble’s grandson, hailed Buckner’s tireless pursuit to advance agriculture. “When you meet Bill Buckner, you know one thing for sure: he loves agriculture. He is a passionate advocate for the sector,” Noble said. “During his time at Noble, Bill worked tirelessly to promote soil health and create innovative new solutions that could open up new opportunities for farmers and ranchers. The Noble Foundation Board of Directors and all the employees offer a whole-hearted thanks to Bill for all of his work.”

The Board of Directors has retained Spencer Stuart, a global executive search firm, to assist in identifying Buckner’s successor. If a successor has not been identified by the end of 2018, Buckner will continue in his current role until his replacement can be found. “We are confident in the continuity of the Noble Research Institute’s business activities,” Noble said. “When a successor is identified, the transition will be seamless.”

A Missouri native, Buckner earned a Bachelor of Science in agricultural economics from the University of Missouri-Columbia in 1979. He spent the next four decades working in the agriculture industry, including 18 years with Bayer. Buckner retired as North American regional head and president and CEO of Bayer CropScience, LP in 2011. Later that year, he agreed to lead Noble.

During Buckner’s tenure as president and CEO, Noble experienced one of its most dramatic organizational shifts in its 73-year history. Originally known as The Samuel Roberts Noble Foundation, Noble separated its research and education operations from its philanthropic activities in 2017.

The organization’s research, education and consultation activities continued forward under a new name, the Noble Research Institute, LLC, and became one of the country’s first agricultural research organizations, a new type of 501(c)(3). The philanthropic activities, including grant-making and scholarship programs, of the original organization were placed in a new, private foundation, which carried the name traditionally associated with the organization’s community giving, The Samuel Roberts Noble Foundation.

Noble brought together farmers, ranchers, soil scientists, economists, environmental interests, agribusinesses, NGOs and government agencies together to examine the role of soil health. Their work identified the need for a national organization to serve as a hub for measurement standards, economic data and coordinated research. Noble then launched the Soil Health Institute in 2015. The soil-focused nonprofit aims to safeguard and enhance the vitality and productivity of the soil through scientific research and advancement.

“Soil health is very much at the heart of the Noble Research Institute’s mission,” Buckner said. “Our founder, Lloyd Noble, lived through the Dust Bowl, and he established our organization to help combat the agricultural challenges our region faced. Launching the Soil Health Institute continues to bring Mr. Noble’s vision to the national stage.”

In recent years at the Noble Research Institute, Buckner has been spearheading the creation of the Ecosystem Services Market, an ambitious national effort to incentivize farmers and ranchers to improve soil health systems through a large-scale program that would finance, generate and sell ecosystem service credits from agricultural working lands.

“I am so proud of the tremendous accomplishments of the past seven years,” Buckner said. “As our founder once said, ‘No individual accomplishes anything worthwhile by his effort alone.” I know that to be true. Any success I have experienced is a direct result of the tremendous men and women I’ve worked with every day here at Noble and our collaborators across the country.”

Looking forward to 2019, Buckner said he anticipates spending more time with his family. While he is retiring from his organizational leadership role, Buckner will continue to serve the agriculture sector.

“Time with my children and grandchildren is first on the agenda,” Buckner said. “However, I’m not done yet. The encore of my career will be spent helping shepherd the Ecosystem Services Market project on behalf of Noble as well as the Soil Health Institute, where I serve as chairman of the board. While I will no longer have the daily responsibilities of leading an organization, I will continue to be involved in advancing agriculture. That’s something I will never stop doing.”