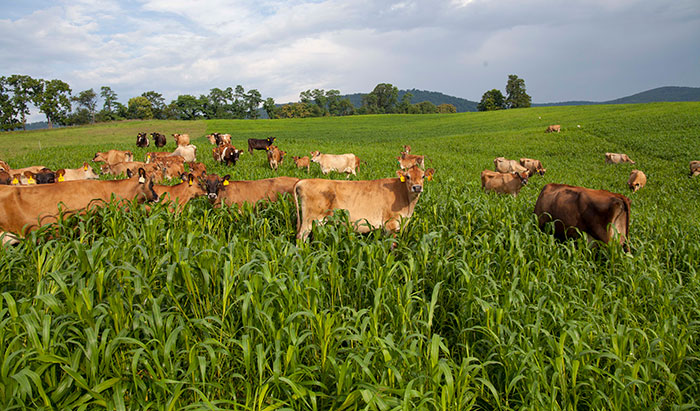 With the onset of colder weather comes the threat of frost and the challenges associated with it. Most notable of these challenges are toxic compounds that certain forage species produce shortly after a frost.

The following species can contain prussic acid and are listed in a descending order of risk of toxicity following a frost with the first having a very high toxic potential and the last rarely causing toxicity:

Other species that are not usually planted for agricultural use but can develop toxic levels of prussic acid include johnsongrass, shattercane, chokecherry, black cherry, and elderberry.

Plants that are grown in soils that are high in nitrogen or deficient in phosphorous or potassium have a higher cyanide poisoning potential.

Prussic acid levels are usually higher in fresh forage than silage or hay following frost damage. “This is because cyanide is a gas and dissipates as the forage is wilted and dried for making silage or dry hay,” Sulc explains.

Young plants of the species that have the potential to lead to cyanide toxicity will have the highest levels of prussic acid.

Animals that have consumed forages with a high prussic acid concentration can die within minutes. Prussic acid hinders the ability to transfer oxygen in the blood stream, so the animals essentially die of suffocation.

Ruminants such as cattle and sheep are more prone to cyanide poisoning than horses or swine. This is due to cud chewing and rumen bacteria, which aid in releasing more cyanide from plant tissues.

To reduce the potential of prussic acid poisoning, Sulc provides some guidelines to follow when grazing livestock this fall.

1. Do not graze cattle on nights when frost is probable. “High levels of toxic compounds are produced within hours after a frost, even if it was a light frost,” Sulc clarifies. He also advises to wait five to seven days following a killing frost to allow plants time to dry.

2. Following a nonkilling frost, do not graze cattle for two weeks. If new growth appears at the base of the plants, wait for a killing freeze and then delay for an additional 10 to 14 days before allowing cattle to graze again.

3. Keep hungry or stressed animals from grazing young growth of species with a high cyanide poisoning potential. “To reduce the risk, feed ground cereal grains to animals before turning them out to graze,” Sulc recommends.

During the hay drying process, the prussic acid content dramatically lessens, so the forage should be safe once baled. “It is rare for dry hay to contain toxic levels of prussic acid,” Sulc explains. He also warns that if hay is not properly cured and dried prior to baling, it should be tested before feeding.

Forages with a high prussic acid potential that are stored as silage are also generally safe to feed to cattle. As a precaution, Sulc recommends waiting five to seven days after a frost before chopping.