Hay barns can be a profit center

By Larry Moorehead
The author is an extension agent with the University of Tennessee based in Moore County. 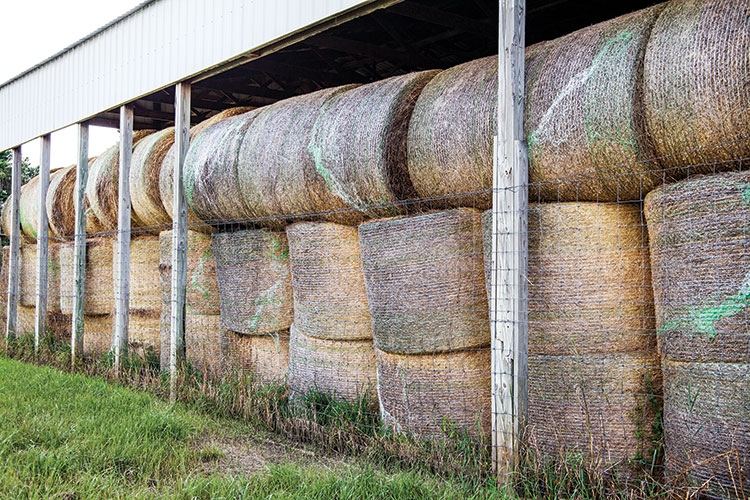 When I began my career as an extension agent in 1977, there was not a round baler in my county. By the mid-1980s, with the shortage of labor and the amount of hay we harvested, round balers became standard equipment on most of our farms.

Cattle producers in Moore County, Tennessee, feed a lot of hay. That’s partially because many of them feed stillage from the Jack Daniel’s distillery located in Lynchburg. Such a by-product requires it be fed with a lot of dietary fiber.

Storage of bales was often done in the fencerow or on the edge of a field. During the winter, I often observed that bale ring feeders got moved frequently because they were full of damaged, poor-quality hay that the cows wouldn’t eat.

I met with our agricultural engineers at the time and got plans for open hay barns that would work well for storing round bales. We even developed plans for farmers to build their own barn trusses.

In the late 1980s, our state forage specialist encouraged us to do some demonstrations on hay storage. I accepted the challenge, trying different ways to keep hay dry. I used old tires to get bales off the ground, put some on the ground covered with plastic, and put some in the barn. This hay was stacked in June.

Tennessee’s state beef specialist, Warren Gill, offered to help check the storage losses in January, which was three months before the end of our hay-feeding season. This was less than seven months after storage.

Our dry matter losses ran from 6 percent in the barn to 30 to 40 percent stored outside without a cover or not stored off the ground. Bales were losing 15 to 20 percent of their dry matter and quality from the top and about the same from the bottom, which was sitting on the ground. These results got producers’ attention, and this prompted new barns to be built throughout the county.

During the following year, the trial was repeated with similar results. Our study tracked closely with similar experiments done at other universities and the Noble Research Institute.

In a beef herd, the biggest expense is feeding cows during the winter. If we can save 30 to 40 percent of that cost, it might mean the difference between an annual profit or loss.

Using our trials’ storage loss data, an economic analysis was developed for building a hay barn. The results showed that a barn could be paid for in five years.

Over the years, producers have built some barns 150 to 200 feet long with both or only one end open. We quickly learned that this type of design is impractical because of the distance needed to drive for stacking hay, and it’s difficult to separate different cuttings or forage qualities; you have to feed it as you come to it.

I now recommend side-loading barns that are 30 to 40 feet wide where good and poor-quality hay can be segregated, and then fed appropriately to different livestock classes.

If possible, it’s better that farms build multiple smaller barns instead of one or two large ones. This will prevent loss of the majority of a farm’s winter-feed supply in the event of a barn fire caused by hot hay. In other words, don’t put all your eggs in one basket. I also like to see smaller barns put up close to where the hay is made or fed to reduce hauling time and expense.

In our humid area of middle Tennessee, hay needs to be baled under 18 percent moisture to reduce the risk of hay heating. If weather permits, I suggest leaving bales outside for two to three days before stacking them the barn. If it looks like rain, bales can be put in the barn in single layers and then stacked higher at a later time. The safest approach is to let bales go through their normal heating process and then get below 120°F before stacking them in the barn.

There are a couple of options for stacking round bales in a barn. Some people have suggested that if you stack hay end on end that they are less likely to heat. I did three different tests at three different farms, comparing stacking as a pyramid versus end on end. We stacked the bales three high and checked the temperatures for two weeks. There was no difference in how soon bales returned to the ambient temperature after normal heating.

If outside — do it right

If hay must be stored outside, there are several proven practices that will reduce losses and waste. When storing hay outside but under a tarp, it is important to put gravel down as a base to keep moisture from migrating out of the ground and into the bales. The stack location needs to be well drained.

If you stack hay outside without covers, align rows north and south, letting the sun go up and over the bales so they dry faster after a rain event. Keep bales out of shaded areas so the bales get full sun, and leave a space between rows so that water has a place to go. Always place round bales end-to-end, and never let the sides of the bales touch.

During my first test of documenting hay losses, a local equipment dealer demonstrated a net wrap baler, which I included in my study. The net wrap did a great job protecting the top of the bale by shedding rain and snow; however, we still measured a 20 percent loss from the bottom where bales sat on the ground.

We’ve also evaluated the use of plastic covers. The combination of a plastic cover and bales set off the ground had less than a 10 percent feed loss, which was only 3 to 4 percent higher than the barn. But tarps cost money, they are hard to apply, and they make it difficult to get your hay out during the winter.

The biggest expense in the cow herd is wintering the cow. With hay being the biggest cost, any waste that can be prevented will favor your bottom line. Hay storage is one opportunity to reduce waste that has been addressed here, but harvesting and feeding also are areas where significant hay losses can be prevented.

This article appeared in the November 2018 issue of Grower on pages 20 and 21.