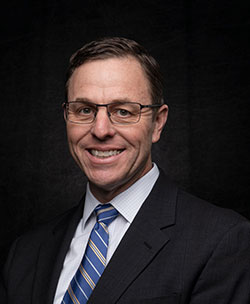 Rhines has been with Noble for almost two decades, most recently serving as its vice president, general counsel and director of public affairs.

“We conducted a nationwide search for a proven leader who possessed a significant understanding of agricultural research, the vision to advance the Noble Research Institute into the next generation, and high personal integrity,” said Rusty Noble, chairman of The Samuel Roberts Noble Foundation Board of Directors and grandson of the organization’s founder, Lloyd Noble. “We found all of those qualities in Steve. He has repeatedly demonstrated his ability to successfully lead critical initiatives, and he has a great passion for agriculture and Oklahoma. We look forward to him leading Noble for many years to come.”

The Samuel Roberts Noble Foundation is the sole member/manager of Noble Research Institute, a nonprofit single-member limited liability company. The Foundation acts through its board of directors to provide leadership for the Institute to carry out its charitable purposes, act as a good steward of its resources, and conduct and support its activities in accordance with the vision of founder Lloyd Noble.

Rhines becomes the ninth president in Noble’s 74-year history. He replaces Bill Buckner, who retired after seven years at the end of 2018. “I’m humbled and honored to be chosen to steward the Noble legacy,” Rhines said. “I am thankful for this opportunity, and I am excited to work alongside a talented and dedicated group of researchers, educators, consultants and staff.”

Rhines, a native of Antlers, Oklahoma, earned a Bachelor of Science in mechanical engineering from the University of Oklahoma in 1990 and a Juris Doctor from Southern Methodist University in 1994. Rhines joined Noble from the international law firm of Sidley Austin in 2001.

Rhines has led the legal function of the nonprofit since 2001. Additionally, he has been responsible for overseeing numerous operational activities during his tenure, including extramural funding, communications, government and public affairs, and most recently, youth and adult education.

The Noble Research Institute is in the process of converting from a private foundation to an ARO. “The development of AROs was almost a seven-year journey, and Steve led the entire effort,” Noble said. “The project is but one example of his demonstrated vision, critical thinking and tenacity. He cares about Noble and its mission, and he cares for the development of the people he works with and leads. These qualities made him the clear choice for the Institute’s future.”

Rhines begins his tenure as the Institute’s president today. Rusty Noble, on behalf of the governing body, made the announcement to employees during a special gathering on the Institute campus.

“I fell in love with the organization the first day I walked onto this campus and heard the story of Lloyd Noble,” Rhines said. “Our focus is land stewardship in livestock production for producer profitability. We deliver guidance, education, solutions, and innovations to farmers and ranchers — regionally and nationally. Being a part of an organization with a committed governing body, leadership team and employees is a foundation for success. It is the greatest job anyone could have.”

In addition to other community activities and service, Rhines serves as a governor-appointed member of both the Oklahoma School for Science and Mathematics Board of Trustees and the Oklahoma Science and Technology Research and Development Board.

Rhines and his wife, Debbie, live in Ardmore. They have three sons currently attending college: Andrew, Thomas and Grant.