Sonar helps him be a better grazier

By Paul Queck
The author is a freelance writer living in Indianapolis, Ind. He recently traveled to The Netherlands to interview dairy farmers and processors. That’s the question Dutch dairyman Piet Jan Thibaudier, 32, asked as he contemplated converting his 180-cow dairy herd to a grazing feeding system. Agriculture experts at nearby Wageningen University in the Netherlands told him about satellite monitoring being pioneered in Australia and New Zealand. 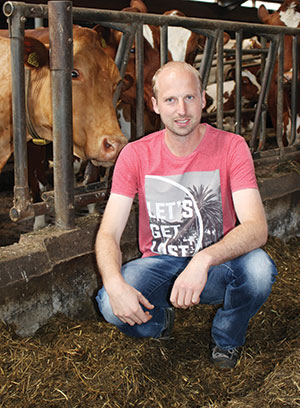 Dutch dairyman Piet Jan Thibaudier has been crossing his Holstein cows with Brown Swiss, Danish Red, and Viking Red
Thibaudier didn’t think that was practical for his 250-acre farm located near Lemmer, Netherlands. “We’re awfully cloudy here in the Netherlands,” he noted. “And I wanted a system that could give me real-time results.”

The system he liked best was one he found in Australia. Called Pasture Reader, it uses sonar to assess average pasture height — an indication of pasture density. The system then engages an algorithm to convert this information to dry matter per acre.

The small reader unit can be mounted on almost any vehicle, including all-terrain vehicles or ATVs. Thibaudier puts his on the front-mounted mower for his tractor. The system includes a monitor for his tractor cab for real-time monitoring.

“I can now see where my poorer areas of pasture are,” said Thibaudier. “So we can go back and find out why they aren’t doing well. Maybe they need reseeding, or maybe better drainage, or perhaps it’s a pH problem.”

He noted that data from the unit also can help apply fertilizer in 40-foot squares across a pasture at a variable speed.

High cost of inputs combined with dropping milk prices has been driving Thibaudier to convert to pasture dairying. With just his parents and a part-time employee, the workload of cutting and hauling in grass silage, hauling out manure, milking cows, and tending to the herd’s needs was becoming taxing.

Then he got to thinking, “Why not let the cows graze rather than having me mow and haul in grass? And with the cows in the pasture, there would be less manure to haul.”

Thibaudier is running mostly crossbred cows and taking some ribbing for it from neighbors, as Holsteins are the dominant breed in his area.

“In a grass system, you need cows with condition,” explained the Dutch dairyman who farms in the northern portion of the country. “Holstein cows are too thin. You have to feed them a lot of corn silage. We don’t grow corn here.” He has been crossing his Holsteins with Brown Swiss and has also introduced Danish Red and Viking Red breeding in his herd.

Another incentive for converting to grazing is that Thibaudier’s milk buyer pays a large premium for milk from grass-based farms.

This article appeared in the February 2019 issue of Hay & Forage Grower on page 15.

The Hay Lady in Pennsylvania Next

They think out of the box Previous