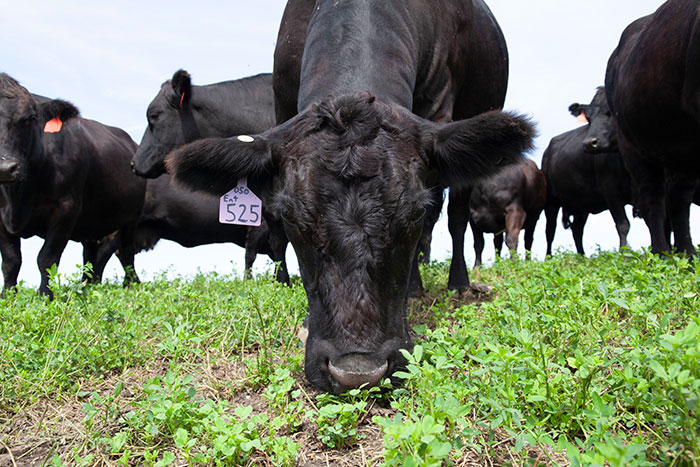 Many livestock producers view the practice of grazing alfalfa as a form of Russian roulette. The differences of opinion among this group usually comes down to how many of the chambers they think are occupied by a bullet.

A recent blog post from Canada’s Beef Cattle Research Council (BFRC) addressed this contentious topic based on both research findings and farmer experience. The conclusion was to respect the practice of grazing alfalfa but try not to fear it.

The potential benefits of grazing alfalfa are well documented and include exceptional livestock weight gains, nitrogen contributions to the soil, a hedge against poor forage production during dry conditions, and a means to enhance biodiversity when mixed with grass.

The fear factor, which is understandable, is all about the risk of bloat.

Though grazing pure alfalfa stands has been made to work, most beef producers may be more interested in blending alfalfa with grasses.

“We’ve looked at alfalfa in several different grazing studies over the years, most often used in a binary mix with grasses,” says Bart Lardner, a former research scientist at the Western Beef Development Centre, now a professor in the Department of Animal and Poultry Science at the University of Saskatchewan. “The alfalfa component produces several benefits. Our industry has lost a lot of money over the years by avoiding alfalfa, partly due to unwarranted fear,” he adds.

Lardner notes that timing is one of the keys for reducing bloat risk. He says that in pastures that contain a high percentage of alfalfa, it’s prudent to wait until the legume reaches at least the bud stage. He also suggests not introducing cattle to alfalfa pastures when a heavy dew exists or while it is raining.

Alfalfa’s big advantage comes in the form of animal performance. For this reason, it is an excellent choice when grazing cow-calf pairs or for stockers. Studies have shown that a 50/50 mixture of alfalfa and grasses can generally produce 1.5 to over 2 pounds of gain per day. Those are also the kind of gains needed in successful grass-fed beef operations.

Another important aspect of alfalfa is its ability to produce when most other species have succumbed to dry growing conditions during the mid- and late-summer seasons.

Lardner references a current three-year study in southern Saskatchewan where they looked at including alfalfa in a pasture mix to help fill that late-summer and early-fall period when grass is slowed due to dry growing conditions. “Alfalfa, with deeper tap roots, can go down and reach the moisture and still be fairly productive,” Lardner explains. “We are still analyzing the numbers on this project, but we are happy with the results from the first two years. With good performance on the alfalfa it may have a role in carrying pastures and cattle through that late-summer period.”

For producers wishing to give alfalfa a try in their grazing operations, here are some of the recommendations that concluded the BCRC blog post:

Spring grass is both a blessing and a curse Next