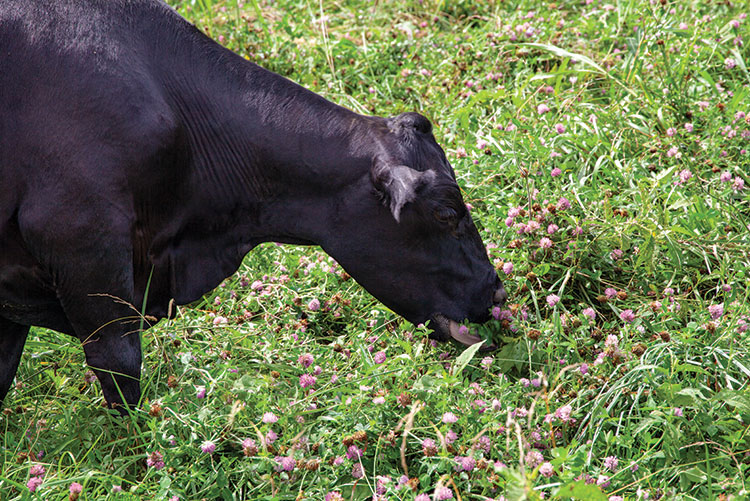 Legumes make immeasurable contributions to forage agriculture. Producers depend on them to add yield, nutritional quality to pastures and hay, and to improve animal gains. Arguably, the ability of legumes to convert or “fix” nitrogen (N) from the air into organic plant nitrogen is their most significant benefit. We even recommend withholding N-fertilizer to mixed stands when legumes make up at least 25 percent of the stand. Many producers will also forego broadleaf herbicides and tolerate weeds to preserve legumes.

Practicing agronomists quote research-based estimates of annual N fixation of 150 to 250 pounds of N per acre and triple these rates have been reported. But we seldom discuss how much direct benefit this N contributes to the companion grass.

If we withhold additional N and broadleaf herbicides due to the presence of clover, is that the right decision? And further, is the 25 percent threshold for withholding additional N accurate, and is it based on visual or dry matter? A stand that has 25 percent clover on a visual basis has much less than that level on a dry matter basis.

The definition of a dilemma is a situation where a difficult decision must be made between two or more alternatives. Managing a grass-legume stand makes the producer come face-to-face with the clover dilemma — Do I have enough legumes to produce economic yields or should I add fertilizer N? Do I have too much clover to apply broadleaf weed killer when it means I lose most of the legume? This management confusion is the clover dilemma.

Not surprisingly, these questions do not have simple answers. Here is a summarized list of what the research shows about the contribution of legume-fixed N to the nitrogen economy of mixed stands:

1. Legumes fix large amounts of N, but the highest numbers are from grass-white clover stands in temperate regions with long growing seasons and near ideal growing conditions.

2. The amount of N fixed per season that is shared directly with companion grasses is between 20 to 50 pounds of N per acre per year, a fraction of total N fixed.

3. White clover turns over more N during the growing season because it sloughs root nodules every time it is defoliated. Nodule sloughing is how fixed legume-N is released to the organic soil N pool. This pool is mineralized and later used by the companion grass. In contrast, alfalfa does not slough nodules after harvest. In fact, alfalfa only sloughs its nodules at the end of the growing season.

4. The N benefit to the companion grass is more closely related to legume growth and yield in the previous rather than current year.

The N benefit to the grass in mixed stands is enhanced as legume yield per acre improves and as stands get older. This grass benefit is presumably because of a buildup of the soil N pool from the sloughing of N-fixing nodules and decaying plants over multiple years; however, grasses are less competitive early in the life of mixtures because they are N limited. It’s during the establishment year when applying some N fertilizer may be beneficial for early grass growth.

The downside of clover loss when broadleaf herbicides are used on mixed stands will be mitigated by the release of N from the killed legume. The companion grass gets the double benefit of weed removal and a burst of N, although new legume species will need to be seeded into the stand.

The addition of grasses to thinning stands of alfalfa improves the recovery of the N fixed by alfalfa and boosts forage yield per acre. An Iowa study on a mature, mixed alfalfa-grass stand with 30 to 45 percent alfalfa found that the greater the alfalfa in the mix, the better the yield of the grass.

Drilling small grains into alfalfa stands in the fall can take advantage of the end-of-season N released from the sloughed alfalfa nodules, adding yield per acre. The small grain cover can suppress weeds and contribute significantly to first cutting yields the following year.

In the end, the modest in-season contribution of fixed N from legumes to companion grasses is possibly disappointing, especially compared to the high amounts of N fixed by the legume. Producing economic yields in mixed stands means keeping legumes present in high quantities (even 30 to 50 percent) by weight, year after year. Fortunately, that is a dilemma I do understand.

This article appeared in the March 2019 issue of Hay & Forage Grower on page 32.

Alfalfa grazing: Respect, but don’t fear it Next