Jesse Bussard
When ranching at 7,200 feet above sea level, hay is a winter necessity. In order to find ways to reduce the costs associated with feeding harvested feed, one must get creative. Enter swath grazing. This form of winter grazing involves feeding animals from windrowed hay that is cut, raked, and stockpiled in-field earlier in the year.

In Wyoming, rancher Shanon Sims of Sims Cattle Company has reaped both ecological and economic rewards from the practice. He estimates his ranch’s annual feed cost savings to be around $10,000 per year.

“It has allowed us to become more sustainable by harvesting more feed with the cow and less mechanically,” said Sims. 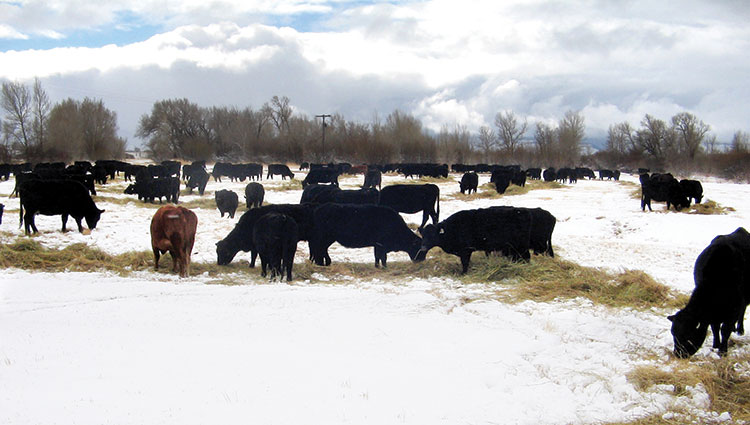 Now going on 20 years of using this feeding method, Sims has the practice down to a science. They begin prepping windrows for swath grazing in late July. Hay is cut and allowed to dry for two to three days. Once dried, the hay is raked into windrows using a wheel rake.

Sims alternates windrow locations each year so they are never in the same place two years consecutively. This is mainly to avoid damaging underlying forage. Sims pointed out that six mower swaths raked into a single row has turned out to be the sweet spot when it comes to creating the perfect windrow.

“When windrows are too small, exposure to the elements can cause hay to become less nutritious,” said Sims. “Too large, and cattle will foul the excess.”

Sims estimated it costs him around $40 per ton to grow, harvest, and graze windrows. Compared to processing loose-stacked hay (what the Sims family does for the rest of their hay needs), Sims said swath grazing allows him to save about $10 on every ton of hay produced and around $15 per cow per year on annual cow costs.

Sims’ swath-grazed hay usually averages around 6.5 percent crude protein and 89 relative feed value. These numbers are more than enough to meet his cows’ nutritional requirements, eliminating the need for supplemental feed during the winter months.

The swath grazing season kicks off for Sims around mid-December, sometimes earlier if drought is a factor. Hay is rationed out and strip-grazed using temporary electric fence. Annual grazing records assist in estimating forage production and predicting where fences will need to be placed. Sims allots around three days worth of feed for his 350-head herd at a time. That’s about 13 to 15 tons per paddock.

“More than that and cows have too much time to ‘bed in,”’ said Sims. “And that leads to fouled, wasted hay.”

Sims pointed out that because grass is dormant and the ground is frozen, he doesn’t worry about back fencing. He typically starts grazing each field near a water source and strategically expands the feeding area away from it with each rotation.

Sims’ tools of the trade include step-in posts and polywire. Half-mile cable spools of polywire are used for longer stretches and areas where elk may be actively moving. Here’s a trick that he shared: The ground is rarely frozen underneath windrows, so planning fence placement such that the posts are in windrows makes the job easier.

Ideally, the ranch likes to have all windrows grazed by early April. Any later and warm, wet weather can lead to moldy hay and palatability issues. Sims finishes out the winter by feeding stacked hay until pastures begin to green up in late May.

Was it easy to make the transition to swath grazing all those years ago?

Sims’ father, Scott, will tell you the cows had no issue, but for him and his son that wasn’t the case.

“The biggest challenge for us really was the paradigm shift to believe that cows would survive and thrive without us putting out a feed portion every day,” said the elder Sims. “We couldn’t believe they could do this the whole winter. We had to figure out what else to do with our time now that we didn’t need to feed every day.”

The family made the transition to swath grazing slowly at first, only setting aside enough windrows to get the herd through a couple of months. These days, 20 years down the road, the Sims agree that making the switch to swath grazing was good for all parties involved. Their ranch has saved money, the cattle are more content, and even the pastures are healthier thanks to better manure distribution and more positive nutrient cycling.

This article appeared in the March 2019 issue of Hay & Forage Grower on page 5.

The clover dilemma Next