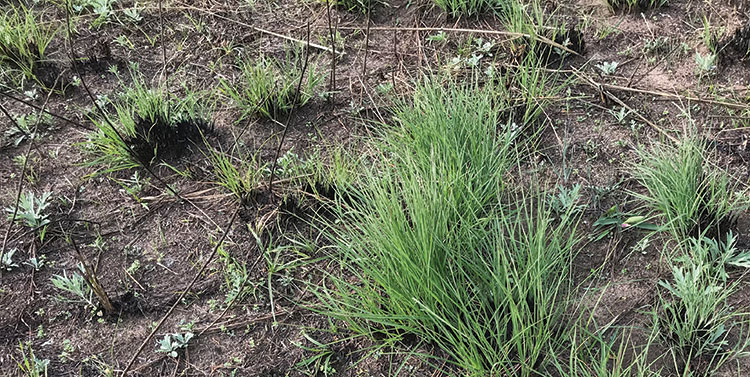 A planned, prescribed burn can improve forage quality. Here, regrowth of little bluestem is shown 50 days after a September burning.

The traditional burning season for the Southern Great Plains ranges is from December to April. When a land manager limits their burn season to these five months, implementing the number of necessary burns can be difficult. Typically, weather during these months is somewhat turbulent, which is caused by fronts moving in and out of the area.

These fronts cause the wind to change direction frequently, leaving small windows for burning. This is one reason why more and more land managers conduct growing-season burns during the late spring through early fall months. Weather during the summer months is warmer, more humid, and typically has more consistent wind patterns. A major goal of prescribed burning, regardless of burn season, is to improve forage quality for livestock and wildlife habitat.

On September 7, 2017, a Noble Research Institute cooperator conducted a prescribed burn in Murray County, Oklahoma. The main goal for this burn was to control encroaching eastern red cedars in a pasture where little bluestem was the dominant grass. As is typical with good soil moisture, regrowth of forages occurred relatively quickly, resulting in greater forage quality.

Out of curiosity, we began collecting forage samples of the regrowth and the unburned little bluestem every three to four weeks after the September burn to evaluate changes in forage quality into the dormant season. We wanted to learn whether the regrowth of native grasses would provide a level of nutrition high enough to meet a mature dry cow’s daily nutrient requirement.

Data and information collected from Oklahoma State University, The Nature Conservancy, and our data from this cooperator has prompted us to learn more about burning native rangeland during the growing season and its effects on forage quality and yield into the winter. If adequate yield and forage quality exists during the dormant season, this may allow producers to extend the grazing season and shorten the number of days that hay and/or supplement is provided. However, stocking rate is expected to be lower.

You need a plan

With beef cattle, we have the flexibility to match class of cattle or stage of production with available forage quality due to their range of protein and energy requirements. For example, the lowest nutrient demand for maintenance requirements comes from a mid-gestation, nonlactating mature beef cow where the CP requirement is 7 percent and the total digestible nutrient (TDN) requirement is 45 percent. However, the highest nutrient demand comes from a lactating first-calf heifer where CP is 10.8 percent and TDN is 70 percent. Knowing this, a producer could give grazing priority in burned areas to the portion of the herd with the highest nutrient demands, reducing feeding costs.

Having adequate fuel in the form of last year’s grass and herbaceous growth is important for a successful summer burn. To ensure the fuel will be present, begin by deferring any grazing as soon as you can in pastures that you would like to burn during the summer or later months. The next step is creating good firebreaks and finding an experienced crew. The day of the burn will be decided by the weather. Burning under the proper weather conditions with a good prescription is critical for a safe burn.

Many land managers have removed prescribed burning as an important process from the management of their property but, when done properly, fire can be a very beneficial forage management practice.

This article appeared in the March 2019 issue of Hay & Forage Grower on page 19.

Sold on swath grazing Next