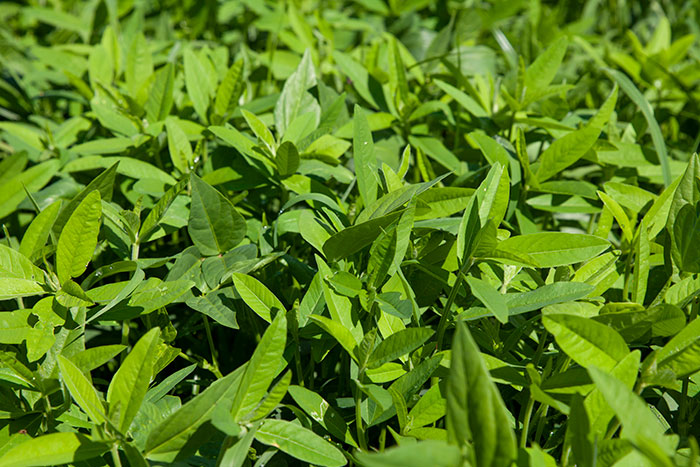 Warm-season perennial grasses are the most used forages in the South but require nitrogen fertilization to maintain productivity and nutritive value. For this reason, warm-season forage legumes are being considered as a companion for the popular perennials and a new alternative for livestock producers.

In an article published in the Panhandle Ag e-News, University of Florida researchers say that sunn hemp, a fast growing, warm-season legume, has been used in the past as a fiber crop, green manure, and cover crop, but it could be more useful as a forage for livestock.

A study done at the University of Florida’s North Florida Research and Education Center looked at two varieties of sunn hemp, Crescent Sun and Blue Leaf, and analyzed their nutritive value, the amount of nitrogen (N2) fixation, and forage yield with varying seeding rates and inoculation levels.

The results showed sunn hemp has a higher crude protein (CP) concentration than traditional warm-season grasses and lessens the need for nitrogen fertilization of perennial grasses.

Both varieties had CP concentrations of about 18 percent, which is 10 percent more than what is typically found in bahiagrass, a common warm-season perennial grass in the South. A higher CP concentration in forage improves cattle performance and promotes livestock gains during the summer.

Crescent Sun fixed 36 pounds of nitrogen per acre during a short period. This amount of fixed nitrogen is equivalent to 171 pounds of ammonium sulfate or 80 pounds of urea per acre. The resulting amount excluded below the ground contributions from the roots and decomposition, which would raise the nitrogen benefit.

When comparing the two varieties, the study found Crescent Sun was more productive and fixed more nitrogen than Blue Leaf; however, Crescent Sun had a slightly lower nutritive value. Forage digestibility varied between the two varieties but was within the typical range for most tropical forages.

Inoculation affected both forage yield and CP concentration but did not affect digestibility or biological N2 fixation. Plants that were inoculated had higher yields and lower CP concentrations.

Concluding, the researchers note sunn hemp is a fast-growing legume that can produce forage biomass within 45 to 60 days of planting. Its greater CP concentrations make it beneficial for livestock growth in the summer and its high level of biological N2 fixation makes it a good companion plant for the warm-season perennial grasses.