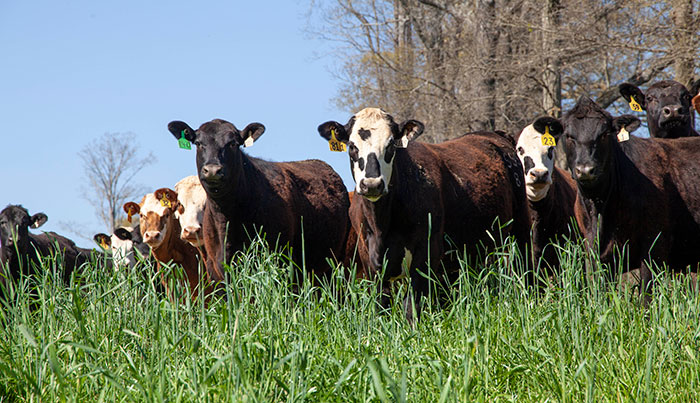 When Southern warm-season grasses go dormant and become unproductive, there are a wide variety of cool-season annual grasses that can be used to extend grazing periods into the winter and spring months.

Cool-season grasses have high nutritive value and lower the dependency on stored hay and supplemental commodity feeds. The early maturity of small grains also allows them to be planted in combination with annual ryegrass. The forage growth periods of small grains and annual ryegrass provide forage production starting in the fall and continuing through late spring.

In a recent Forage News newsletter, Rocky Lemus, a forage and grazing systems specialist for Mississippi State University Extension, explains the differences between cool-season grass options and the importance of finding the right fit for your soil and system.

Annual ryegrass is the most common grass in the Southeast for developing a winter grazing program. Small grain species, including cereal rye, oats, wheat, and triticale, can be incorporated into the program as well to provide a longer forage production season and to lower costs. “These cool-season annual grasses are high in crude protein and energy and low in fiber from late fall to mid-spring,” Lemus explains. These grasses, however, regress slightly in nutritive value in early winter.

The main differences between the cool-season grasses are their yields, tolerance of heat and moisture, and timing of maturity. While cost is important, Lemus notes that it shouldn’t dictate which grass to plant. Consider soil fertility and what is needed most from your grazed seasonal forage production before looking too deeply into seed prices.

Annual ryegrass: Ryegrass provides a long period of forage production from late December to mid-May. It is high in nutritional value and peaks in production in late March to early April. While ryegrass yields tend to be higher than small grains, it matures later in the season. Ryegrass can tolerate high-moisture soils and is cheaper than most small grains on a per acre basis.

Cereal rye: Cereal rye is the most tolerant of cold and drought, but it has a higher cost than wheat and oats. Planted in early September, it reaches a higher forage production in the fall than other small grains. Cereal rye matures early in the growing season.

Oats: Oats are more palatable and have a higher fall production level than wheat but are also the most cold sensitive, which poses a risk for stand loss. It matures in the spring and has a cost between that of cereal rye and wheat.

Triticale: A cross between cereal rye and wheat, triticale is as palatable as wheat and as vigorous as cereal rye, yielding about the same as both grasses. It is, however, more expensive than all other small grains.

Wheat: Wheat has the lowest cost of all the cool-season grasses and is well adapted to a range of soils. It is tolerant of grazing and has the most production in early winter.

When choosing what to plant, take into consideration the fertility and pH of your soil. “Optimum forage production depends on a sound soil fertility program,” Lemus emphasizes. He explains that cool-season grasses will have optimal growth with a soil pH of 6.

Apply phosphorus and potassium per soil test recommendations, and apply nitrogen in three separate applications. Lemus recommends not exceeding 40 to 50 units of nitrogen per acre in each fertilization cycle.

Lemus suggests mixtures of annual ryegrass and small grains to find the best option to extend grazing and improve animal performance in the long run. “It is the time to start making decisions for your winter grazing program,” he notes. “Do not wait until the last minute.”