Why not bag it?

By Mary Drewnoski
The author is a beef systems specialist, University of Nebraska. 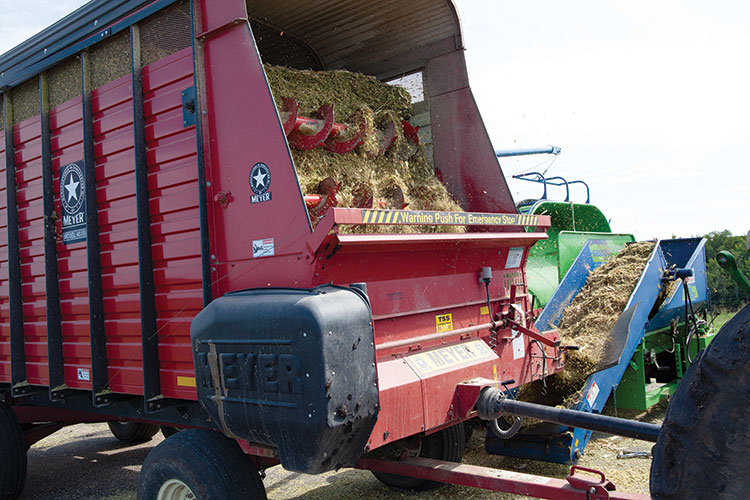 As I travel around, I see a lot of silage in uncovered piles, many for use by cow-calf or backgrounding operations. Looking at the amount of surface spoilage and knowing about the other major sources of losses, I found myself wondering if many of these producers would be better off bagging their silage.

If everything is done “right,” the amount of silage loss or shrink will run about 10 percent when storing and feeding silage. Done “right” means that the silage was cut at the right moisture, packed well, covered immediately and during feedout, fed out at an adequate rate, and feedout methods were used to inhibit air penetration into the face.

This is not the situation observed with most uncovered piles. Interestingly, typical losses in bagged silage are about 8 to 10 percent, as long as the silage was at proper moisture when put into the bag and care was taken to ensure the proper density was achieved during bagging. Basically, bagging can help with two major sources of loss when it comes to silage management: surface spoilage and low feedout rates.

I often hear farmers talk about how much labor it takes to cover a bunker or a pile, and they say “it’s just not worth it,” or that they “just don’t have the labor.” However, I would argue these producers also underestimate the feed loss and spoilage that occurs when not covering a pile or bunker. The loss in the top 3 feet in covered bunkers is about 18 percent, while uncovered is 30 percent.

You may be wondering, “How much silage is in the top 3 feet of a bunker?” Let’s just assume the silage in the bunker is 10 feet tall. Then that 30 percent loss to surface spoilage represents 10 percent of all the silage in the bunker. If a ton of silage is worth $35, then that is $3.50 lost per ton of silage. In drive-over piles, the amount of silage on the surface 3 feet can be 20 percent or more, accounting for a loss of $7 per ton in the pile.

These calculations don’t account for nutrient losses in the silage that are remaining. Remember, the best part of the silage is eaten by the microbes first, so what remains of the silage from the surface 3 feet has a lot less value than what was initially put into storage. Actually, it has been shown that feeding the black material at the top has a negative feeding value. Believe it or not, it actually reduces the digestion of the rest of the feed in the diet because it negatively affects the microbes in the rumen.

When well-managed, feedout losses for bunkers or piles can be 3 percent or less. To achieve this, at least 5 inches needs to be removed from the entire surface face each day in the winter and 8 inches in the summer. Many producers have a silage face that is much too big for the rate at which they use the silage.

For instance, if you have a small bunker that is 30 feet wide and the silage is 10 feet tall, you would need to feed 3 to 5 tons of silage each day to achieve 5 to 8 inches of removal. If removal rates are less, even with proper removal techniques (keeping the face tight), a loss of 10 percent or more, depending on outside temperature, can occur. So, low feedout rates can cost another $2.50 per ton or more. Additionally, the low feedout rate results in the cattle constantly being fed silage that is much lower in feed value, as it has already started to spoil.

Using a custom operator or renting a bagger can make bagging a low investment option. After some calling around, I found that, on average, $9 per ton is the going rate for bagging silage in my area. That includes the cost of the bag. So, for arguments sake, let’s say it costs $9 more per ton to bag silage versus making a pile. If I don’t cover the pile, I can come close to paying for the cost of bagging with the lost feed inherent with an uncovered bunker or silage pile. If I take into account the lost feeding value of what is exposed to oxygen, then bagging looks pretty good.

With that said, I should point out that bagging is not foolproof. It does take some skill to get a well-packed bag. Also, remember that with bagging, there is more surface covered in plastic per ton of silage. This means there is more opportunity for holes and air exposure. Thus, regular checks to ensure that holes are patched quickly is important to keeping spoilage to a minimum.

One size does not fit all when it comes to silage storage. Bagging may not be the most economic option for everyone, but it’s a great fit for some. If you do not have the time or labor to cover your silage, or you have low feedout rates, then bagging is likely a more cost-effective option for storing silage.

This article appeared in the August/September 2019 issue of Hay & Forage Grower on page 29.

Store and feed baleage for maximum value Next