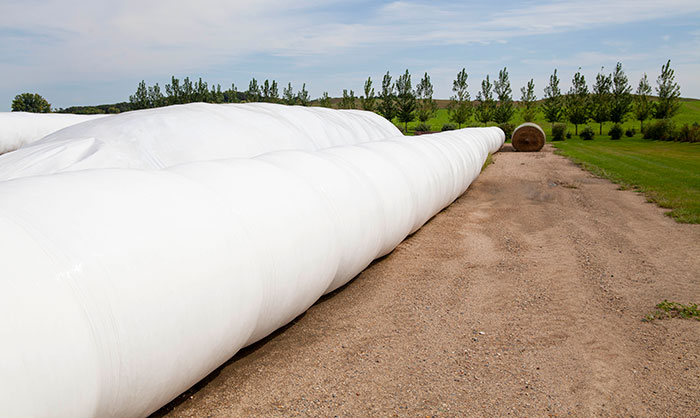 Moving from a dry hay system to baleage involves additional capital investment. In fact, it’s a major reason why many hay producers don’t make that switch.

Even with the additional cash outlay for the wrapping machine, wrapping material, and perhaps even a new or different baler, many hay producers in the past 10 years have moved to baleage as their primary haymaking system. Many more use it as a fallback option when the weather doesn’t cooperate for dry hay.

Once hay is baled wet, wrapped, and fermented, the final step to achieve maximum return from this value-added crop is to store and feed it without significant losses.

As with any wet feed, once baleage is exposed to oxygen, deterioration ensues. This exposure can occur while in storage if bale wrap integrity isn’t maintained or it most certainly occurs during feedout once the wrap is removed.

Dennis Hancock, University of Georgia Extension forage specialist, contrasts baleage with potato salad when it’s set out on a picnic table during a hot summer day. He notes that both products will deteriorate rapidly.

Ideally, baleage should be consumed within 24 hours of unwrapping. That time period can be stretched if cool or cold temperatures exist.

An in-line bale wrapper provides additional potential risk for spoilage once an end is opened and air is introduced. This can be especially detrimental if there are already large air gaps in the row of bales caused by nonuniform bale sizes.

As a general rule, when bales are stored with an in-line wrapper, specialists recommend feeding enough animals so that at least one bale is fed per day. This is because as a bale is fed, the next bale in the line is being exposed to air. Individually wrapped bales are usually not subject to exposure before they are fed, so the feeding schedule is somewhat more flexible.

Harvest moisture has a large impact on storage and feeding losses. Typically, hay for baleage is harvested at 50 to 65 percent moisture before it is wrapped and ensiled.

Baling too dry is the most common problem. Dry forage doesn’t provide the bacteria enough moisture to allow sufficient fermentation; it does allow fungi to grow during storage and feeding.

Baling too wet is a less frequent issue, but high-moisture silage spoils quickly when exposed to air and is subject to clostridial fermentation and potentially cause botulism in cattle.

Store bales where plastic integrity can be maintained, keeping them away from trees where branches may fall. Also keep weed growth in the storage area under control, but don't place bales on freshly mowed areas where coarse stubble can puncture the plastic wrap. Stored bales need to be routinely checked for damage from wildlife (raccoons are a common problem) and rodent activity.

Depending on many factors, fermentation usually completes within three to six weeks. Feeding bales before fermentation is finished can be done in an emergency, but a partially fermented product will heat excessively and spoil quickly.

Don't feed bales wrapped with an in-line bale wrapper for at least four to six weeks after wrapping unless the whole line of bales is being fed in just a few days.

Although it may be tempting, don’t spear into bales after they have been wrapped. Squeeze carriers or handlers (another additional investment) are preferred but may still stretch, tear, or puncture bales if not used properly. Any hole in the plastic barrier can lead to small areas or even entire bales that heat and become moldy.

To feed a bale that has been wrapped using an in-line wrapper, spear into the bale, lift and then pull it away. The plastic between the speared bale and the next bale will tear away; then cut over the top and peel the plastic off in one large section.

To feed an individually wrapped bale, cut a large "X" in the end to be speared and pull back the flaps. Spear the bale, lift and cut across the top and down the other flat side to peel the plastic off in one piece. Always remove the net wrap or twine before feeding the bale.

Wastage and refusal are rarely an issue when feeding baled silage unless there are too few animals. Less waste helps to offset the additional investment of a baleage system.

If silage remains when the time frame for feeding has been exceeded, put out a fresh bale. Don’t force animals to eat waste or refused silage; this will lead to poor performance and/or animal health issues.

Baleage systems can be a sizeable investment. A part of recapturing that investment involves minimizing waste and getting the best animal performance possible from making a quality product.

Why not bag it? Previous