A different kind of champion 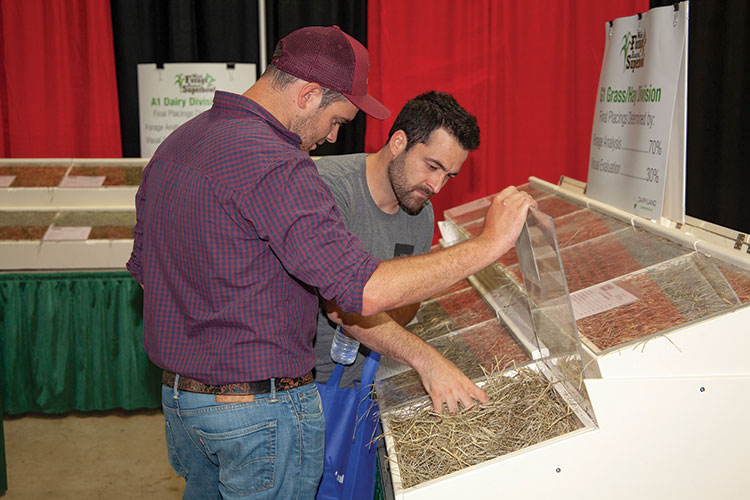 While champion bovines are being named on the colored wood shavings at World Dairy Expo in Madison, Wis., each October, the best of the best in forages are also competing for a title of their own. Just a stone’s throw away from the Coliseum showring lies the Arena Building, home of the World Forage Analysis Superbowl, which is closely watched over by Doug Harland, laboratory manager for Dairyland Laboratories in DePere, Wis.

Harland’s involvement in the Superbowl goes all the way back to when he started at AgSource Laboratories in 1988. While he wasn’t directly involved with the Superbowl at the start, he did some work in the background, aside from his early job responsibilities of quality testing hay from around the state and driving his mobile forage-testing van to hay auctions during the winter.

As the competition began to grow, so did Harland’s role. He started assisting with “crunching the numbers” and was more hands-on in data analysis. “I just sort of shadowed in those days and learned the ropes,” Harland reflected.

In 2012, AgSource’s feed and forage division was purchased by Dairyland. With that acquisition, Dairyland opened a lab facility in DePere, Wis., which Harland now manages. Harland not only took over the lab, but also the Forage Superbowl and has maintained that role since 2013.

The World Forage Analysis Superbowl started as a collaborative effort between Holstein World, World Dairy Expo, University of Wisconsin-Extension, and the Wisconsin Dairy Herd Improvement (DHI) Cooperative. AgSource joined the mix in 1986 with their involvement in the verification of DHI records, since the entries originally came from working dairy farms. Along with an entry submission, farms would report their herd size, rolling herd average, and DHI number to be verified.

Many changes were made to the contest over the years. Hay & Forage Grower became a sponsor, and the contest was split into two divisions: Dairy and Commercial. The Dairy division consisted of hay, haylage, and corn silage while Commercial was divided into hay and baleage. One large sample was submitted for analysis and shipped directly to AgSource.

The top 25 entries in each category were then judged and narrowed down to the top 20; these were then displayed at World Dairy Expo. Each category had a Grand Champion and a top First Time Entrant. An Overall Grand Champion was named for the entire contest. The top five in every category also received prizes, which were made possible by the strong corporate support.

In 2002, the Superbowl became the first forage contest to implement a new ranking system based on RFQ (relative forage quality). These days, RFQ remains a key component in the hay and haylage categories while the corn silage categories focus more on milk per ton. There are now seven categories: Dairy hay, commercial hay, grass hay, baleage, haylage, standard corn silage, and BMR (brown midrib) corn silage. Contest entries are received from across the U.S.

The final scores are determined using a weighted formula of 70 percent milk per ton or RFQ and 30 percent on a judge’s visual score. The prizes are still monetary, totaling over $25,000 per year, with the top four in each category receiving cash awards. An Overall Grand Champion is named along with a Grand Champion First Time Entrant. Another award that has been included in the past 10 years is the Quality Counts Award.

Starting out, the contest was primarily producer driven. “Mostly, producers would send in their samples and compare it to their neighbors,” Harland explained. He quickly added that the growth over the years has been astronomical, largely because of corporate influence and sponsorship.

Harland emphasized that the focus is still on forages. “There’s a difference between growth and change. Growth would be adding the new categories and parameters like digestibility, while change would definitely be the corporate influence, which is very reflective of the dairy industry,” he said.

“In some ways, I kind of miss the producer driven part of it,” Harland reminisced. “That being said, one of the best parts of my week is when a producer comes up to me and says, ‘Thank you for doing this; I can use this and get ideas from other producers.’”

For Harland, the most rewarding part of the contest is watching producers network. Many commercial growers gain steady clients because people see their name and forages displayed. During the contest, producers are able to share what does and doesn’t work for them when it comes to growing their forages.

“Being able to foster that opportunity for them to learn from each other is so fulfilling for me,” Harland said. He noted that many of the same producers come back year after year, knowing that they grow good, quality forages every single year and are able to share their knowledge. “That’s the part of the contest that has stayed pure through all the changes; that’s truly great,” he said with a satisfactory smile.

“We started out fairly simple; it was mostly hay and haylage with maybe 280 to 350 total entries,” Harland said. Finalists’ samples were once processed on-site in a tent, and the equipment needed to grind the samples was loud.

In 2017, Harland received over 1,000 samples entered in the eight categories of the contest. Of those, 802 were corn silage. Such a large pool of entries led to a whole new logistical challenge: Where do you put everything?

“I only have four chest freezers in the basement, and 800 samples are not going to fit in four chest freezers,” Harland chuckled. He recalled buying large totes and taking the samples that didn’t fit in the chest freezers to commercial cold storage. “You can’t get rid of any samples until you know who the finalists are, so I had to keep all 1,066 samples,” he recalled animatedly. 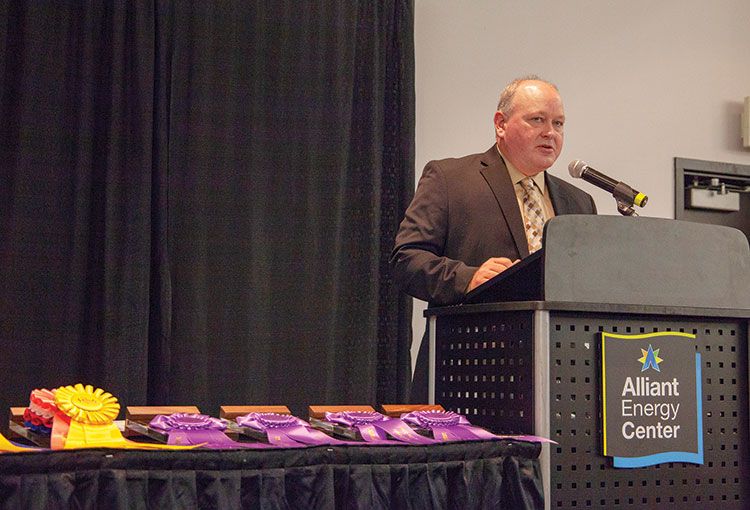 Doug Harland has been involved with the World Forage Analysis Superbowl for over 30 years.

Harland reflected on some of his best memories of overseeing the Superbowl. He spent several moments thinking before responding, “So many amazing things have happened that there really isn’t just one that sticks out in particular.” But he did share one story that came to mind.

A few years back while overseeing the contest display samples, a man walked up to a haylage sample and picked up a small portion. “It’s pretty normal for people to pick up a sample to feel and smell it,” Harland explained. But what he did next threw Harland; the man stuck it in his mouth and began chewing.

“I remember chewing on hay stems as a kid, but never haylage,” he said through stifled laughter.

A math geek who likes to talk

In his regular job as a forage testing lab manager, Harland’s duty list is a long one. He provides the best service and data he can to customers, along with managing daily lab operations. In May of 2017, Dairyland opened a new lab in Battle Creek, Mich., in which Harland has some supervisory responsibilities.

When reflecting back on his career, Harland noted that the largest change he has seen is how specialized forage and feed testing has become. “Back when I first started, nutritionists mostly wanted CP (crude protein), NDF (neutral detergent fiber), ADF (acid detergent fiber), and dry matter; now, forage digestibility is a huge thing,” Harland explained. He said that forage analysis reports have gone from a single page with a dozen parameters to a page and a half with various components that are essential in ration balancing programs.

“It’s become so pinpointed, and it’s up to us to provide the data accurately and efficiently,” Harland remarked. He also believes that in the future, digestion rates will be an even larger focus.

But above all, it’s the variety that his job entails that means the most to Harland. With his math and numbers background, he thoroughly enjoys the analytical side of his job. Perhaps on the opposite end of the spectrum, is his fondness for customer interaction. He relishes the sensation of knowing he helped somebody. “My wife likes to call me a math geek that can talk to people,” Harland chuckled. “That pretty much sums me up.”

Harland made it explicitly clear that making the Superbowl run smoothly is a team effort. Planning for the next year’s contest begins soon after the current one concludes.

He hopes the Superbowl will continue long into the future, but no matter what that future holds, it is certain this event has had a large impact not only on Harland and World Dairy Expo, but also the many producers who submit entries and the sponsoring companies. Whether it’s the cows, networking, or vendors that bring attendees to Expo, the World Forage Analysis Superbowl exhibit is definitely worth a visit for any forage producer.

This article appeared in the August/September 2019 issue of Hay & Forage Grower on page 26 and 27.