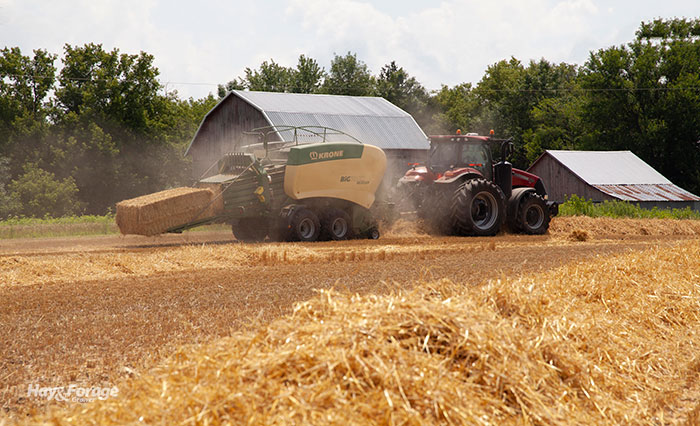 A couple of weeks ago, my neighbor purchased a new push lawn mower and parked his old lawn mower in the front yard by the road. The old model was both leaking and burning oil.

“Somebody will take it,” he told me, but I had my doubts. For one thing, he didn’t even put a “free” sign on it.

Sure enough, within a couple of hours, a guy stopped, talked to my neighbor, was told of the mower’s warts, and then happily loaded it into the back of his truck. He was now the proud owner of a vintage lawn mower that would leave an oil spot on his garage floor every night.

I guess it’s true that one man’s trash is another man’s treasure. That certainly seems to be the case for wheat straw, as it has become a valued commodity in many markets and no longer is worthy of a “trash” designation.

Soon, across a large part of the U.S., haymakers will be contacting their neighbors and beyond to see if they can buy and bale the straw off of their wheat fields. Most wheat growers are happy to oblige either because they want the extra income or prefer not to deal with the additional plant residue.

For many haymakers, straw-baling season is the equivalent to a summer vacation. It comes with a much-reduced stress level of maturity concerns, rain, slow dry down, and harvest moisture that come with haymaking. Good, clean wheat straw is just a joy to bale, or at least that’s been my experience.

The straw market has changed drastically over the years. For decades, it was purely a bedding product. Although it’s still used for bedding today, most dairy farms have found better bedding alternatives for their cows, especially in freestall barns. However, all was not lost for the straw market. In fact, it’s gotten better . . . a lot better.

Many of those same cows that now lie on sand are eating straw as a component of their daily total mixed ration (TMR). The straw adds physically effective fiber that helps counteract some of low-fiber forages that are often produced and fed. Essentially, the straw market has transformed from a bedding market to a feedstuff market. It also adds significant value-added income for growing wheat.

The value of straw

It’s not uncommon that wheat growers will want to know the value of the straw as it lies in the field once the combine has rolled through. The place to start with this question is nutrient value.

Many university-based estimates for the nutrient fertilizer equivalent of wheat straw can be found. Here are a few examples: 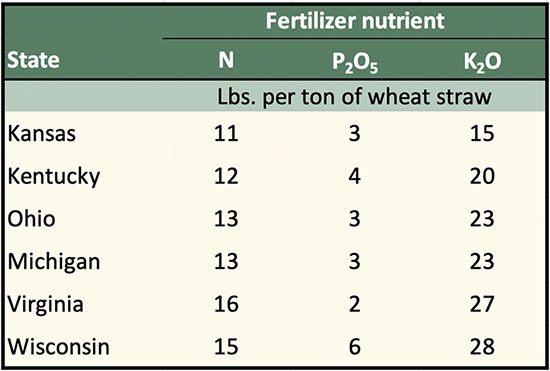 As you can see, state estimates of wheat straw nutrients vary. Most of this variation is probably due to the inherent differences of soils and management practices that prevail in various regions. For example, nitrogen fertilization can impact the plant’s nitrogen content and the height of straw stubble also will affect the nutrient concentrations of the harvested straw.

If left unbaled on the field, the nitrogen in wheat straw will not be immediately available to plants. It will first have to be mineralized by microorganisms and converted to ammonium and nitrate. In fact, leaving the residue on the field will tie up additional nitrogen in the short term as the mineralization process takes place. Wheat straw has an extremely high carbon-to-nitrogen ratio.

Weedy straw will take longer to dry. Green weeds that are put into the bale can be cause for bale heating and mold, which could create health issues if the straw is being used for horse bedding. It also will make for a much more unpleasant and dirtier task if the straw is ultimately chopped for feed or bedding.

Depending on regional availability and local livestock usage, straw can be a profitable enterprise for haymakers. In some areas, it’s not uncommon to see retail prices approaching that of average to good quality hay. There is also additional income to be made for the wheat grower who has no use for the straw beyond just soil nutrient value.

A different kind of champion Previous