Yield trends for the King and Queen of forages

If corn is king, then alfalfa is the queen of forages. Corn silage and alfalfa complement one another well in forage cropping systems for dairy/livestock systems. Growing alfalfa in rotation with corn improves yields, lowers the risk of crop loss, reduces or eliminates the need for commercial fertilizer nitrogen and pest control inputs, spreads cropping and labor activities throughout the growing season, improves soil quality, and reduces cropland vulnerability to nitrate leaching, soil erosion, and nutrient runoff.

Alfalfa and corn silage have complementary nutritional characteristics that benefit livestock when both are included in diets. Thus, growing and feeding alfalfa in conjunction with corn will improve the economic and environmental sustainability of crop and livestock production.

It’s sometimes beneficial to look back and see where we’ve been in terms of yield progress for these foundational livestock feed sources. What we find is that corn silage and alfalfa have very different stories. 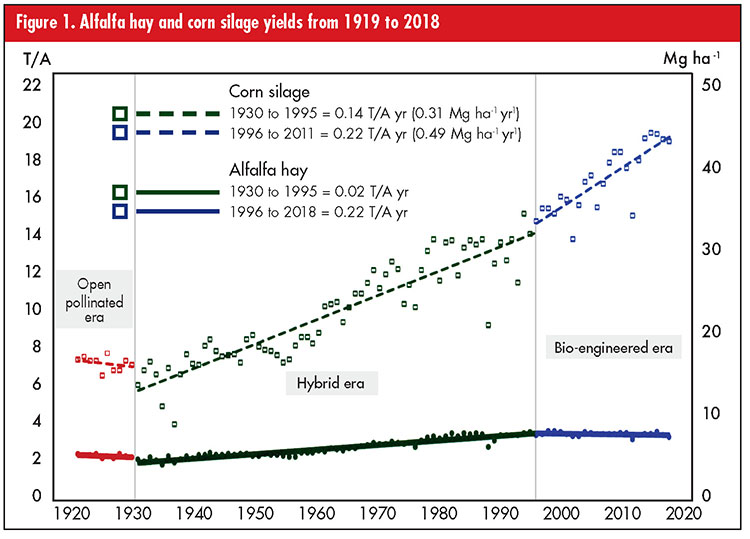 Average alfalfa hay and corn silage yields between 1996 and 2018 vary dramatically around the U.S. (Figures 2 and 3). Alfalfa yields are higher in the western U.S. than the Midwest largely due to irrigation. A similar trend is observed for corn silage. 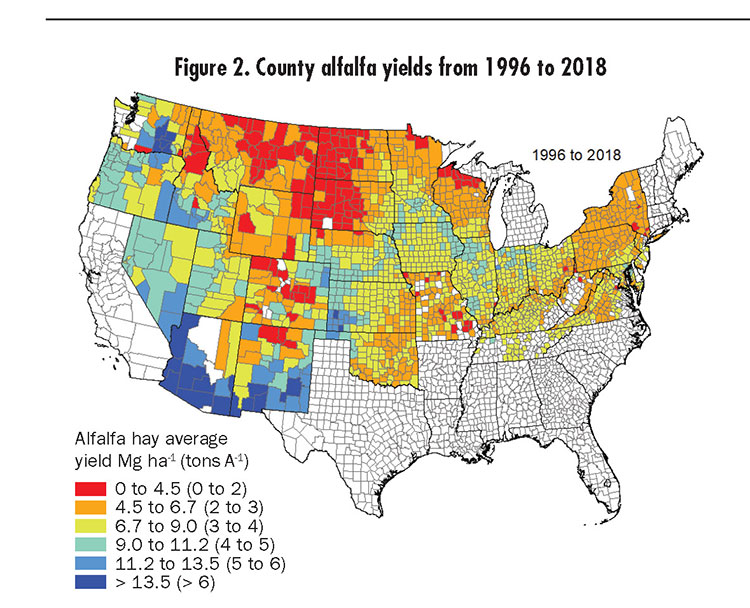 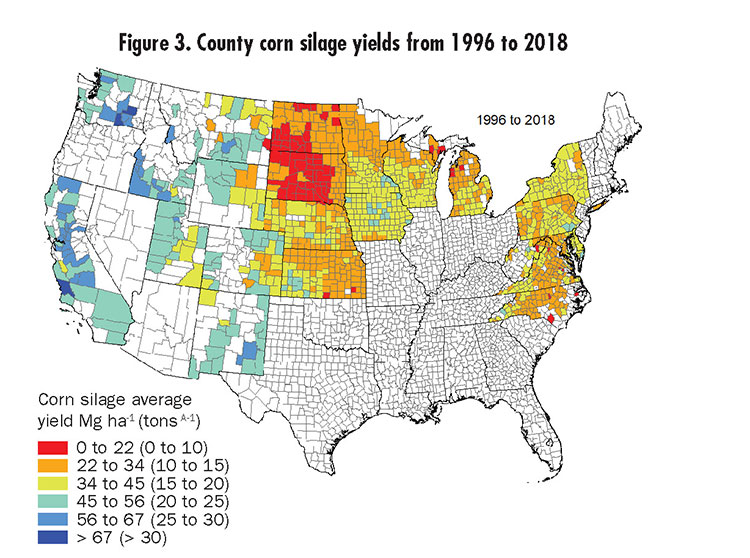 During the hybrid era (1930 to 1995) corn silage yields improved at the rate of 0.13 tons per acre per year (Figure 1). Many reasons are given for this dramatic increase, including development of improved, adapted hybrids; greater use of fertilizers and pesticides; machinery improvements for planting and harvesting; and improved management skills of corn silage growers.

Corn silage yield has continued to climb during the “Biotech Era” (1996 to present) at the rate of 0.23 tons per acre annually. Biotech hybrids have insect and herbicide resistance traits that do well at “protecting” yield. In addition, end-users of corn silage have become much more diligent about management and silage yield and quality.

Between 1996 and 2018, statistics for alfalfa hay production were kept for 1,558 U.S counties (Figure 2 and 4). Of those 1,447 counties, 93 percent showed no significant yield progress. The most significant yield gains have occurred in Idaho, Montana, and Nebraska. 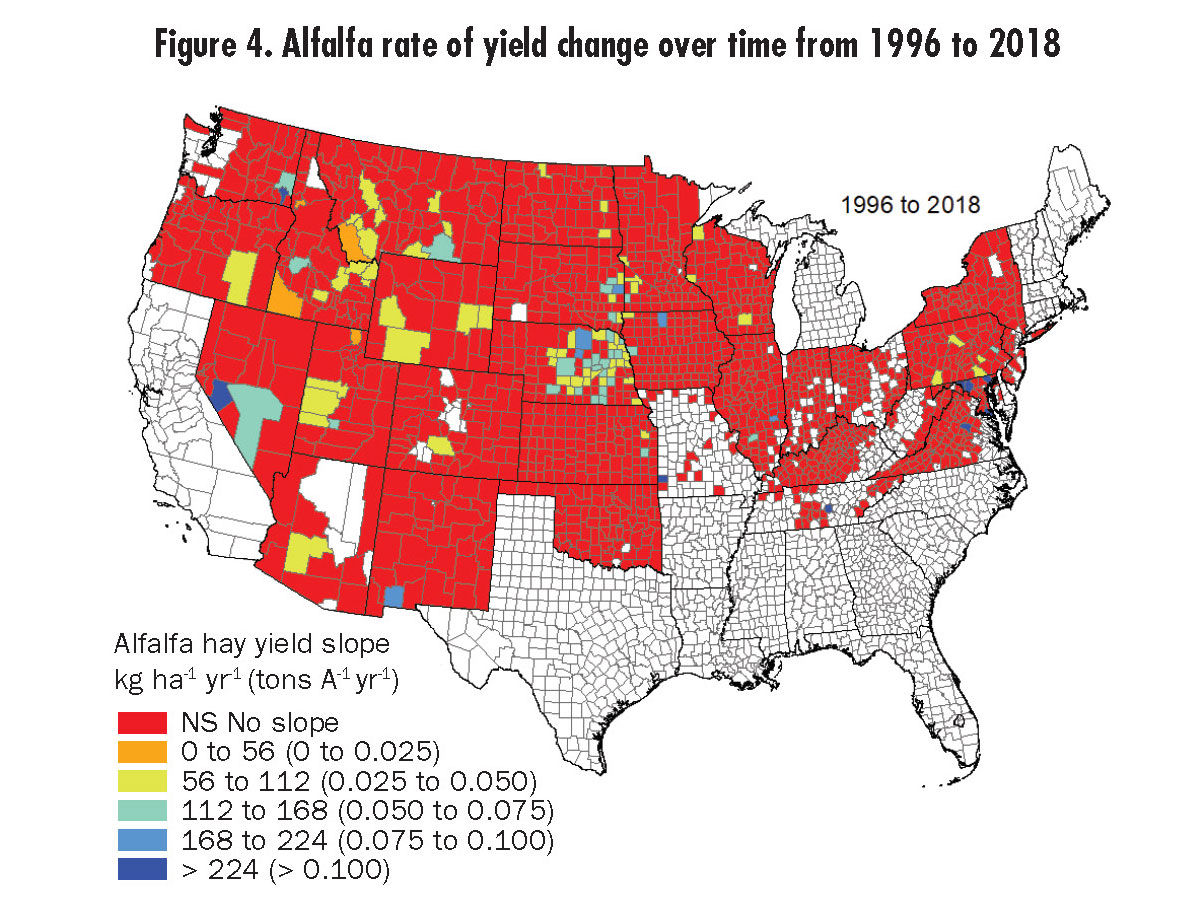 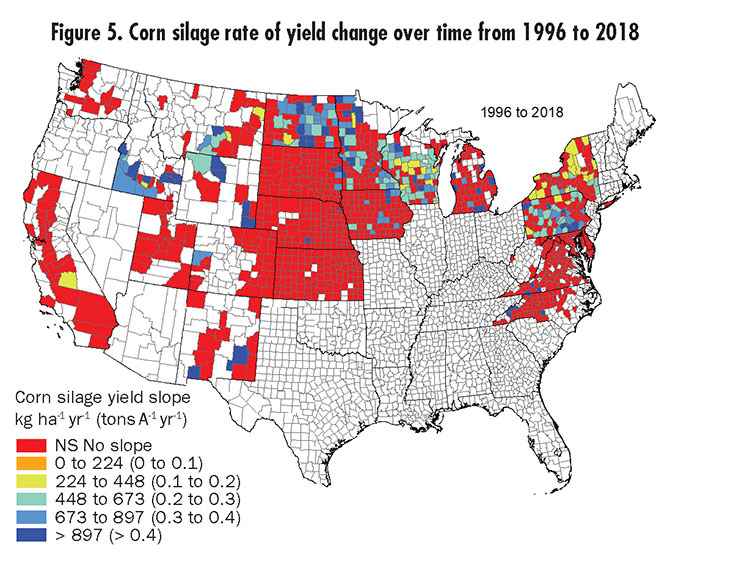 Corn silage yields will likely continue to rise as new adapted hybrids are developed and as managers prioritize and acquire skills for producing high-yielding, quality corn silage. Alfalfa hay, on the other hand, will need much breeding work done to improve yields in the future.

This article appeared in the August/September 2019 issue of Hay & Forage Grower on pages 18 and 19.

Alfalfa may be more salt tolerant than we thought Previous