Checking in on those new alfalfa seedings 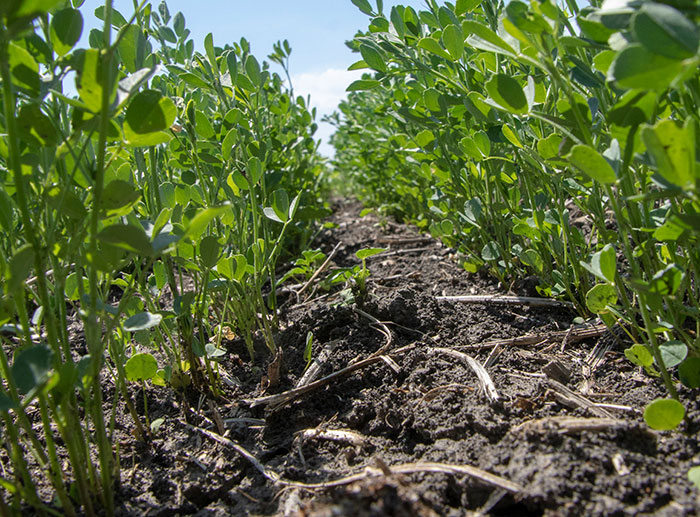 Wherever I traveled this summer, a common theme was that the spring and early summer were extremely wet. This caused problems getting any high-quality hay made, but it also was problematic from the standpoint of establishing new alfalfa seedings.

Many spring seedings that did get made were done so into less than ideal seedbeds, were challenged by relentless rainfall during seedling establishment, lost plants to flooding or root diseases, and generally struggled for survival. Some fields or parts of fields were reseeded during the late summer.

Coupled with wet early season conditions was also above average alfalfa winterkill in many regions. This means more than the usual number of new seeding fields were established in 2019.

Though the focus now may be on the harvest of annual crops and subsequent tillage, it’s also a good idea to take time and evaluate spring-seeded alfalfa fields before the snow flies.

Establishing alfalfa is a numbers game. Depending on the amount of seed coating, every 1 pound of seed dropped per acre equates to three to five seeds per square foot. Hence, a seeding rate of 15 pounds per acre is equivalent to 45 to 75 potential plants per square foot.

Regardless of seeding rate, research verifies that it’s rare to find more than 25 to 35 plants per square foot by fall. Often, that number is less, and this year it may be far less.

So, at what number of plants should you be concerned?

Much depends on winter survival, but heading into winter with 15 plants per square foot shouldn’t be cause for losing sleep. Besides, at this juncture, you’re just making an assessment for possible action next spring.

Often, by the end of the first production year, plant counts will be south of 10, but, at that point, stem counts are better at predicting potential yield. Three to four healthy plants per square foot can still make for productive alfalfa stands.

When evaluating new alfalfa seedings this fall, consider that weather may not be the only or primary reason why stands are less than adequate.

Don’t take a fall cutting from spring-seeded alfalfa stands that are currently marginal. The short-term tactic is to preserve as many alfalfa plants as possible through winter and into next summer.

Finally, make sure soil fertility, especially potassium levels, are in the optimum range before temperatures drop.

Evaluating new alfalfa seedings now offers an indication of which fields to keep a close eye on come spring. If needed, there are several proven strategies that can be initiated next year to extend the life of marginal stands.

Interseeding alfalfa into alfalfa is not typically recommended because of autotoxicity, but the success rate is better (not guaranteed) when done within 12 months of seeding. It’s most likely to be successful where entire patches are absent or nearly absent of alfalfa plants.

Red clover is always an option for interseeding with a no-till drill, but many producers just don’t like its slower dry down rate, especially for dry hay.

The best way to extend the useful life of a young, but thin, alfalfa stand is to interseed a perennial grass such as orchardgrass, tall fescue, or meadow fescue. This is sometimes routinely done to three- or four-year-old alfalfa stands, but there’s no reason why it can’t be done to younger stands as well.

If only an additional one or possibly two years is desired from the alfalfa stand, then interseeding annual or Italian ryegrass is a high-quality forage option.

Acre by acre, alfalfa invades the South Next