By Brian Luck
The author is an extension agricultural engineer and assistant professor in the Department of Biological Systems Engineering at the University of Wisconsin-Madison.

In late 2018, the University of Wisconsin-Madison received a grant from the USDA-NIFA Alfalfa and Forages Research Program to investigate the effects of wheel traffic on alfalfa regrowth, yield, and quality. Another goal of the funded research is to attempt to use commercially available remote sensing techniques to characterize the amount of damage in a production system due to traffic at harvest and model that effect in terms of yield loss and quality variation in the harvested crop.

The first field season for this study was completed in 2019. Three blocks of plots were established at Arlington Agricultural Research Station in Wisconsin. These blocks contained different tillage treatments including: 1. Fall and spring tillage prior to seeding, 2. Spring tillage only prior to seeding, and 3. No-till seeding. Another block was identified that was previously established alfalfa in its second year of production. 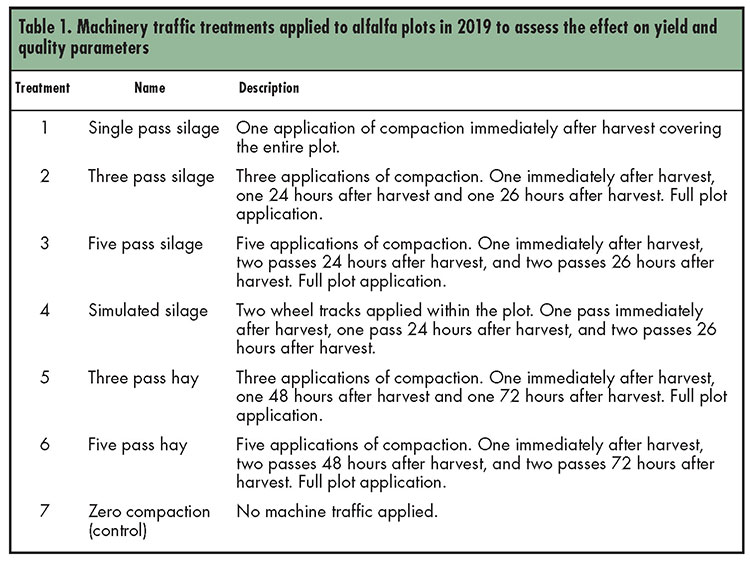 Within each of these blocks, seven different treatments were applied and replicated three times (Table 1). These treatments were designed to simulate both silage and hay harvest systems. Compaction was applied with a 17,400-pound swather at the times described in Table 1. Harvest on these plots was completed on a typical 30-day production harvest schedule with the first harvest of the newly seeded alfalfa being 60 days after seeding.

A walk-behind, flail-type plot harvester was used, and the compaction applied by this machine and the operator was considered negligible. A total of four harvests were completed on the established alfalfa plots and three harvests were completed on the newly seeded plots. Four random samples from each harvested plot were collected for moisture content determination and forage quality measurement.

While the compaction treatments and yield measurements are the focus of this article, other data were collected that will provide insight into the effect of wheel traffic on the plants and the soil. Cone penetrometer measurements were collected pre- and post-harvest within each plot. Five readings were taken randomly within the plots in an effort to understand the magnitude of compaction caused by the treatments. 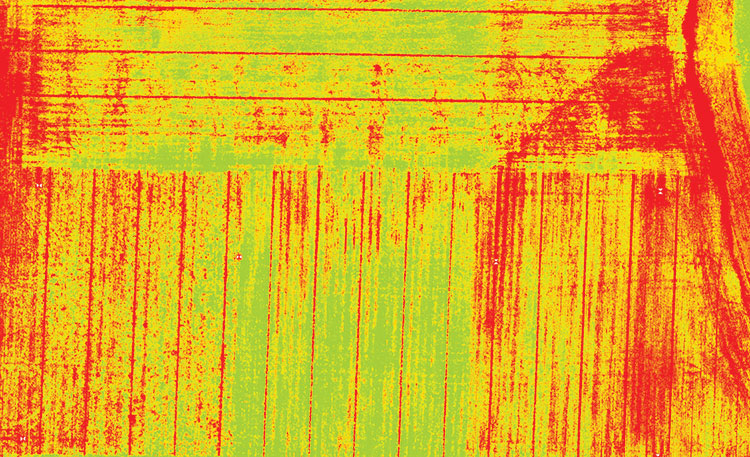 Remote sensing measurements of the plots were also gathered pre- and post-harvest (Figure 1 and 2 respectively). This effort will provide vegetative index values for the plants and will be used in an on-farm study to assess machinery movement in the field and how regrowth is affected due to that movement. 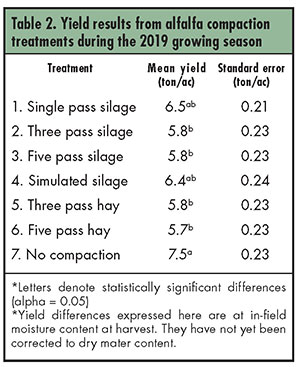 able 2 shows the compiled yield differences that resulted from compaction treatments during the 2019 growing season across all four harvests. These values are expressed at the moisture content of the alfalfa at harvest and have not been corrected to dry matter content. The statistical differences (letter groupings, alpha = 0.05) expressed here agree with what the research team expected to see.

Higher amounts of traffic on alfalfa does reduce yield at the following harvest. Timing of the application of compaction also played a role. For Treatment 6, plots were compacted at harvest and then again 48 hours after harvest (two applications) and 72 hours after harvest (two applications), for a total of five passes. Applying wheel traffic after more regrowth has occurred does cause additional yield reduction compared to applied compaction immediately at harvest.

Data collected during the 2019 growing season, including penetrometer measurements, remote sensing data, and forage quality data are currently being analyzed. We expect to quantify the effect of wheel traffic on alfalfa regrowth and forage quality in order to foster ideas on how to reduce wheel traffic and/or ground pressure applied during harvest. Minimizing this impact will help optimize yield and quality in our alfalfa production systems.

This article appeared in the January 2020 issue of Hay & Forage Grower on pages 24 and 25.