This hay farm is a family affair

By Michaela King
King served as the 2019 Hay & Forage Grower summer editorial intern. She currently attends the University of Minnesota-Twin Cities and is majoring in professional journalism and photography. 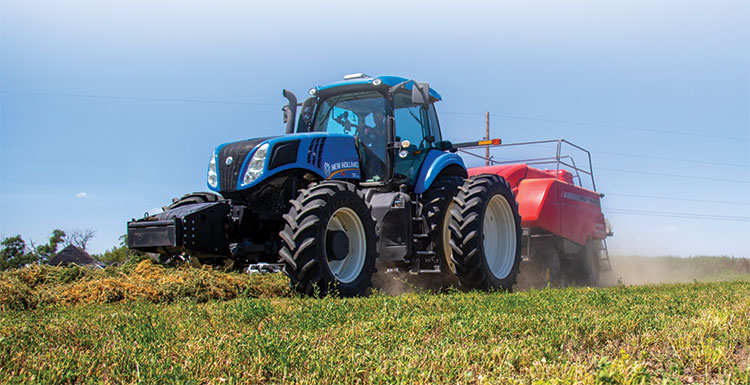 At 31,000 feet above the flat farmland of northeast Colorado, the view offers hundreds of bright green pivot irrigation circles. This region of Colorado receives an average of only 12 to 14 inches of precipitation annually. The climate is hot and dry with low humidity.

Last year, similar to many other areas of the U.S., the weather in northeast Colorado strayed from the norm with heavy rainfall early in the growing season. Haymaking was a challenge; however, the unusual weather didn’t stop the Schuppe family from doing what they do best.

Schuppe Hay Farms is a family-owned and operated commercial hay company that grows alfalfa, a variety of grasses, and corn in Iliff, Colo. Marketing hay across the country, Mike Schuppe, the fourth generation to run the farm, strives to raise quality forage products for customers located within and far beyond the boundaries of their home state.

During the busy time of year — summer haymaking — the Schuppe crew consists of 10 employees, which includes Mike’s wife, Kammy, his son and daughter-in-law, Dalton and Meagan, three full-time employees, and several part timers. Occasionally, there is also help from Mike’s grandchildren, Raylan and Diem, who love to ride shotgun in the tractors. A recently born grandson, Ryatt, will no doubt follow in his older siblings’ footsteps.

Including their custom work acres, the Schuppes currently farm 1,300 acres of alfalfa, 1,300 acres of a variety of forage grasses, 800 acres of corn, and they also graze 2,000 acres of dry (nonirrigated) grass. The farm has evolved from much humbler beginnings.

“In 1912, my great-grandparents immigrated to the United States from Russia. They moved to Colorado in 1917 and worked as beet laborers,” Mike said. “In 1927, they saved up enough to buy the original farm.”

As the years continued, the farm grew and experienced changes in crop enterprises, and when Mike’s dad was young, almost all of the crops grown on the farm were used to feed the variety of livestock being raised.

Mike recalled that as he was growing up, the farm only sold small amounts of hay and corn. That quickly changed.

In 1988, Mike bought the land the office is currently on to expand the farm. After switching from small square bales to round bales, the Schuppes began taking on custom work. After leasing a 3x3 square baler and realizing the marketability of the bales, in 1998, he purchased a 3x3 baler of his own. With the new equipment, his customer base only grew.

“After Dalton finished college in 2012, the business kind of exploded,” Kammy explained. “As he got more involved, we took on more and more as a business.” With time and hard work, the farm has transformed into the successful hay business it is today. 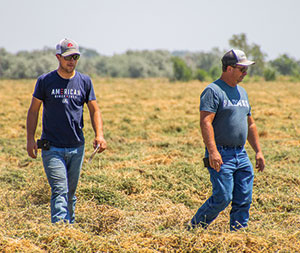 Dalton (left) and Mike Schuppe check the condition of a wilted alfalfa field.
After continuous growth, the Schuppes switched to 3x4 balers and now run three 15-foot swathers and three balers to achieve added efficiency. “Some customers still ask for 3x3 bales, but we just have too many acres to be running the smaller balers,” Mike explained.

Each year, the business looks to eclipse alfalfa yields of 7 or more tons per acre in four cuttings. Their first cutting is typically the biggest yielder. They strive for 3.5 to 4 tons per acre of grass in two to three cuttings, excluding the fall and spring grazing of the dry grass.

The Schuppes put more emphasis on forage quality than yield and work to maintain a loyal customer base. “We bale when the hay is ready, not when we feel like it,” Mike noted. “There is nothing better than baling good hay, which is something that can’t be rushed.”

Excluding their dry hay pastures, all their fields are under irrigation. The water is sourced from a reservoir, which gets water from the South Platte River. The system was built in the early 1900s and runs as a canal system that stretches over 40 miles. Mike and Dalton start their summer days at the diversion structures setting the water needs for the day. The water is shared with neighbors and levels are recorded daily.

“It blows my mind that something built so long ago still works for us today,” Mike noted. “It just shows the original builders knew what they were doing all those years ago.”

While most of their customer base is located in the eastern part of the U.S., Kammy explained that where their hay is sold depends on the weather patterns in a given year.

“If it’s dry in Texas, we will have a big market there,” she remarked. “Iowa and Indiana are big markets for us, but we’ve also delivered to Florida, New York, and Louisiana in some years.”

Schuppe Hay Farms uses a variety of strategies to promote their product, including a Facebook page, a website, and inclusion in the annual Colorado Hay Directory where a large number of their new buyers come from. However, their most effective marketing tool is word of mouth.

“Once you get established in a community, you start getting neighbors calling, and that’s the biggest reason that we’ve grown,” Mike noted. “We provide quality products to our loyal customers, and then they do promotion for us,” he continued.

In addition to promotion by their customers, often their returning truck drivers will bring new customers. People will ask the drivers where the hay came from, and they will pass along the contact information. Schuppe Hay Farms has one full-time driver who stays within 150 miles of the farm and several owner-operators they use every year for longer hauls. They will also contact freight brokers who will line up back hauls.

A family with many hats

Aside from the hay business, the Schuppes also operate other successful enterprises. Kammy explained that farm cash flow can be easier to manage when multiple enterprises are a part of the larger picture. “Most of the add-on companies just fell into our laps,” she said. “After the local feed and seed retailer closed, we saw a need and took on the business. We now sell seed, livestock supplies such as minerals, and twine. This has allowed us to buy in bulk, and we have seen growth in this part of our business,” she added.

Dalton also runs an excavating company called SNS Excavating. In 2013, the South Platte River flooded, so Dalton bought an excavator to help improve some farmland that they were leasing. It became clear that there were other local landowners with the same need. With slow expansion and a consistent customer base, the excavation enterprise became a good source of extra income.

Mike’s parents, Earline and Gordon, run the cattle side of the company. The Limousin and Lim-Flex cattle are grazed on 2,000 acres of dry grass pastures.

“Each of the different enterprises really just help the bigger corporation,” Kammy noted. “The most unique part of our business is that every family member has something they focus on. Everyone is represented in their own way.”

It’s all about family

Although the haymaking operation is successful, it is not what stands out when spending time on this farm operation. What is most impressive is the overwhelming sense of pride that the family takes in working with each other. Within a short amount of time, it’s easy to sense how important family is to the Schuppes. Mike mentioned his biggest business success was that the farm had sustained itself for six generations.

“I worked as soon as I could. Dalton was helping me as soon as he could reach the tractor pedals, and I love seeing grandchildren wanting to ride along and help when they can,” Mike said. “I want the farm to be here for generations to come.”

The future goals of Schuppe Hay Farms are simple: Improve what they have, work to produce quality products and services, and pass it on to the next generation. That recipe has proved successful for 100 years, and there’s no reason to believe it won’t continue for another 100. The future looks as bright from the ground as it does from 31,000 feet above.

This article appeared in the February 2020 issue of Hay & Forage Grower on pages 28 to 30.

This dairyman calves seasonally . . . in the fall Next