This dairyman calves seasonally . . . in the fall 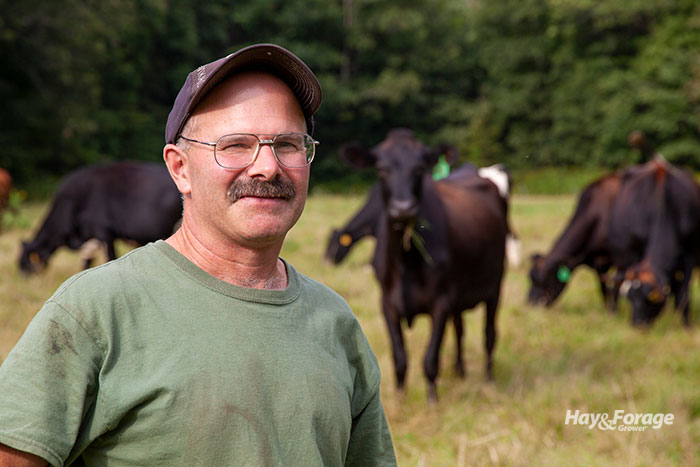 Among the many famous “Seinfeld” episodes is the one where George Costanza comes to the conclusion that all of his everyday decisions were wrong, making his life miserable. At the suggestion of his friend Jerry, George decides that whatever his initial intuition, he will actually do the exact opposite. Not so amazingly, George’s life takes an immediate turn for the better.

Chris Gowdy, a New Hampshire organic dairyman, seasonal calves his small dairy herd of 30 Jersey-Holstein crossbreds. So, you might think that like most other seasonal calving dairy herds, he calves in the spring when forage provided from fast-growing grass pastures is plentiful. You’d be wrong.

Gowdy calves his herd beginning in the late summer when pastures are on the road to dormancy . . . a George Costanza move. But he does so with good reason.

The small New Hampshire dairy was purchased by Gowdy and his wife, Holly, in 1995. Ironically, they moved from Walpole, Mass., to Walpole, N.H. At that time, they had 20 Angus brood cows and got into the business of selling calves and freezer beef.

Gowdy also began selling organic forage in 2003. Eventually, he was convinced to convert his existing barn into one suited for milking cows.

“The original barn was set up for sheep, but the conversion to a dairy was relatively easy,” the amiable Gowdy told me during a visit to his farm last fall. “We set up a milk house and a simple flat barn parlor with six headlocks. In 2017, we bought a used step-up parlor.”

Gowdy became certified organic for dairy in 2008 and started selling milk to Organic Valley Cooperative in 2009. A year later, he converted to seasonal calving.

These days, Gowdy dries off cows on June 1 and starts calving around August 1. When pressed for reasons why he employs such a backwards strategy relative to forage supply, Gowdy expounded with ease.

“A big part of it is simply related to labor,” he said. “My wife works at the high school, and I have one son in college and another in high school, both involved in sports. That leaves me here alone. If I calved in the spring, I’d be dealing with both making first-cut winter feed and with a herd of recently fresh cows. With late summer and fall calving, having all or most of the cows dry, it gives me time to make top-quality stored feed.”

Gowdy makes both baleage and dry hay. He has a limited amount of grazeable acres on the home farm, so he rents additional fields within about a 12-mile radius for haymaking or grazing heifers and dry cows. He also owns another 45-acre tract for heifer grazing bordering the nearby Connecticut River.

“We move animals around a lot,” Gowdy said. “We just put up fiberglass posts and polywire, then make sure they have water and check on them every day.”

The flip side of Gowdy’s fall-calving strategy is that he can devote full attention to the cows during the winter when milk production is at its peak. “Another advantage that I see is being able to capture the premium milk price offered during the winter,” Gowdy noted. He ships milk through Organic Valley to Stonyfield Yogurt in Londonderry, N.H., which is only 80 miles from his farm. 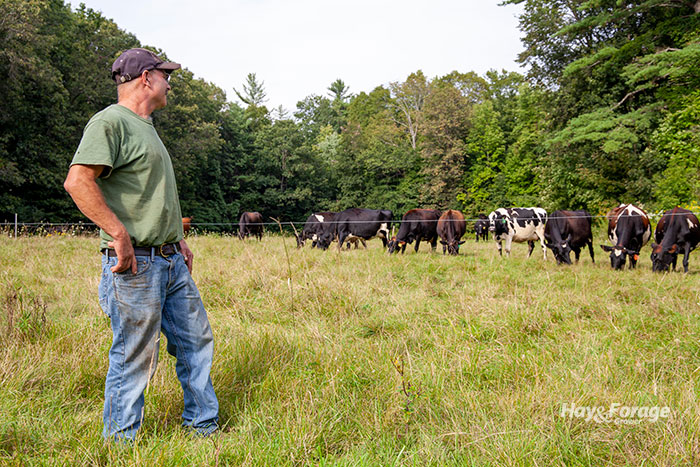 The final advantage Gowdy sees to his fall-calving system relates to reproduction. “Instead of trying to get cows A.I.-bred in the middle of summer, I’m doing it in late fall when the temperature is cooler,” he said.

Gowdy hasn’t fed grain to his cows since 2012. This means that forage quality becomes a strong emphasis. Most of his pastures and hayfields are perennial cool-season grasses with red and white clover. Winterkill took most of his alfalfa out in spring 2019, which he doesn’t plan to replace.

Clovers are routinely interseeded into his fields to both improve forage quality and provide nitrogen for the grasses.

Being organic, Gowdy is limited as to what can be added for soil improvement beyond just rotational grazing. “We have pretty acidic soils,” Gowdy said, “so, I apply ag lime where needed and also use wood ash, which is getting harder to obtain.” For alfalfa, he uses potassium sulfate with a little bit of boron. Winter manure that is collected in the barns from a bedded pack is also spread on fields. 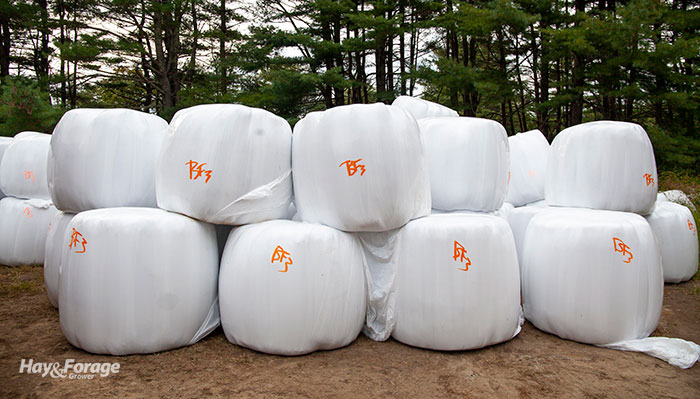 High-quality baleage is stored by quality and fed during the winter.

Gowdy owns a modest line of haying equipment and a bale wrapper. His Claas round baler, which is used for both dry hay and baleage, is equipped with a precutter. He inoculates his baleage, striving for a 55% to 60% moisture level at harvest.

All of his forage is tested for quality and he stores bales based on their quality analysis.

Gowdy is only one of about 100 dairies left in New Hampshire. “I’m not sure we’ll always do things this way,” Gowdy said, referring to his unique fall-calving and forage management approach. “For right now, however, this fits with our available resources.”

He zigs when others zag Next

This hay farm is a family affair Previous