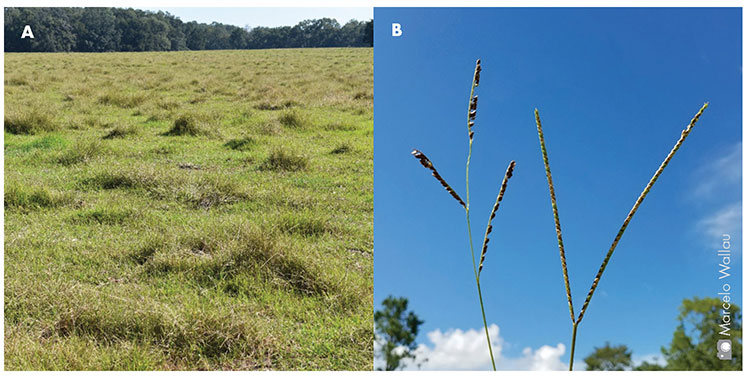 A: Bahiagrass field contaminated with brunswickgrass.
B: Brunswickgrass (left) and bahiagrass (right) seedheads.

Concerns about brunswickgrass in bahiagrass pastures and fields began about 15 years ago in Levi County, Fla. It was especially prevalent in areas that were overgrazed, leaving patches of bahiagrass-looking plants that livestock would not graze. These days, brunswickgrass has now become a major contaminant in some bahiagrass seed lots.

Brunswickgrass (Paspalum nicorae) is closely related to bahiagrass (P. notatum) and dallisgrass (P. dilatatum), and because of this, the plants look similar, and both produce similar sized and shaped seed. Recently, reports of invaded pastures have become more frequent, especially in north central Florida, a key region for Pensacola bahiagrass seed production. Although brunswickgrass has similar nutritive value as bahiagrass, it is not as palatable to cattle. Due to its rhizomatous growth habit, brunswickgrass forms patches in fields and quickly expands under heavy grazing, while bahiagrass is not as competitive.

Similar to bahiagrass, brunswickgrass is a perennial warm-season grass with long creeping rhizomes, soft leaf blades that are 8 to 14 inches long and about 1/4 inch wide (see table below). Plant height ranges from 8 to 28 inches and produces three to four alternate racemes (bahiagrass has only two racemes). Brunswickgrass seeds are slightly smaller than that of Pensacola bahiagrass, and the seed coat has a dark, chestnut brown center.

Brunswickgrass grows in a range of soil and climatic conditions. It is very adapted to moderately acid, sandy soils, but also persists in sandy loam and well-drained, light to medium clay-based soils. Because of its drought resistance, it is very aggressive and less palatable to animals when growing in sandy soils, rapidly taking over when desirable species are overgrazed.

Brunswickgrass is a tetraploid, similar to Argentine bahiagrass. Control of this weed may be more difficult because of its higher ploidy level, as research has shown that Argentine is less sensitive to metsulfuron herbicides than Pensacola, which is a diploid bahiagrass. Currently, selective control options for brunswickgrass are limited, especially those that are safe on bahiagrass and bermudagrass. Because of its perennial growth habit, systemic herbicides applied in an integrated approach will be the most efficient means of controlling brunswickgrass.

Producers in Florida have observed brunswickgrass control when treating pastures with hexazinone (Velpar, Tide, Velossa) for smutgrass removal. Therefore, University of Florida researchers are currently evaluating application timing and rates of hexazinone. Preliminary results indicate up to 80% brunswickgrass control with applications of 0.5 pounds of hexazinone per acre (1 quart per acre of Velpar L). Improved control has also been observed with higher rates and when broadcast applications are made in late summer compared to spring or early summer.

In cases of high infestation, complete pasture renovation that includes nonselective herbicide applications and/or cultivation and crop rotation may be necessary. Relying on mechanical cultivation alone may not solve the problem; it may exacerbate the spread of brunswickgrass through rhizome segments. A combination of mechanical cultivation, herbicides, and crop rotation is a more likely solution since seed survival in the soil seed bank is not believed to be long-term.

During the seed cleaning process, brunswickgrass seed does not readily separate from Pensacola bahiagrass seed, as both seeds are close in size and shape. This has made it difficult for bahiagrass seed processors to effectively eliminate brunswickgrass in order to meet total weed seed specifications (less than 2%) for marketable seed. It is believed that brunswickgrass is more readily removed from Argentine bahiagrass due to differences in seed size.

There have been a growing number of reports of brunswickgrass infestations in pastures around the Deep South, and certain efforts should be taken to reduce its spread. The most effective way is to avoid infestation by using certified seed sources when establishing new pastures.

The key to controlling brunswickgrass is to demand seed supplies that are free of brunswickgrass seed contamination. Known as “blue-tag seed,” certified seed has been produced under strict production guidelines that minimize the risk of contamination and then those seed fields and harvested seed lots are inspected by a certifying agency. Currently, there is a large market for “brown-bag seed” in bahiagrass in the Southeast; however, this could result in purchasing bahiagrass seed contaminated with brunswickgrass.

While noncertified is less expensive, the cost associated with managing a brunswickgrass infestation will outweigh the initial difference in establishment costs. The best preventive actions a producer can take to avoid further distribution of this grass are to refrain from harvesting contaminated production fields and to always use certified seeds when establishing new pastures. It is important to remember that large quantities of bahiagrass seed are sold without any field inspections for purity, resulting in the sale of some contaminated seed for use in new pasture plantings. Plan to purchase certified seed from a reliable seed source.

Potassium helped turn this hayfield around Next

There’s no one recipe for growing timothy Previous