Potassium helped turn this hayfield around

By Jimmy C. Henning
The author is a professor and extension forage specialist with the University of Kentucky in Lexington. 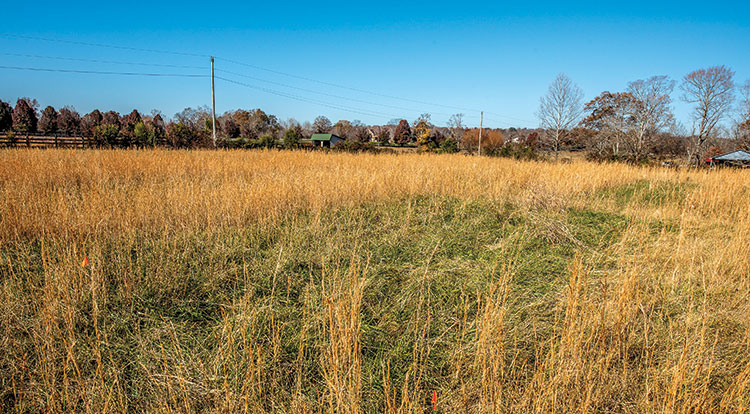 Additions of nitrogen and potassium drastically reduced broomsedge in this Kentucky hayfield.

POTASSIUM (K) can make a case for the “Don’t get no respect” award among the fertilizer nutrients. Nitrogen (N) gets most of the attention because of its showy results; nothing perks up a hayfield or pasture faster. Calcium (Ca) and phosphorus (P) get lots of attention as “bone makers” for Kentucky’s signature thoroughbreds. Even phosphorus gets the “No such thing as bad press” award with its problematic relationship with water quality.

Lowly potassium just does not get any respect. Yet, after nitrogen, no nutrient is needed in greater amounts for grass hay or pasture. Essential for proper water relations, disease resistance, and even winterhardiness, potassium is crucial for healthy plants. But when it comes to getting a little love in the fertilizer buggy, potassium is often under applied or not applied at all.

The first step in a sound soil fertility program is a representative soil test. Even if it reveals needs that cannot all be addressed, it is the starting point for a strategic fertilizer application plan. Even so, it is easy for a little inattention to lead to some soil fertility imbalances. The following farm situation shows how this can happen, and potassium was a big part of the solution.

Over a period of years, a Kentucky farm owner harvested hay from a tall fescue field and fertilized primarily with triple-19 (19-19-19). Over time, production on the field faltered and the forage base shifted toward broomsedge (Andropogon virginicus). His county extension agent suggested a soil test, and the results were as follows: pH=6.2, Mehlich P=72 parts per million (ppm), and Mehlich K=52 ppm. It showed all levels were acceptable except for potassium, which was very low.

The very low K levels were due to fertilizing with only 200 pounds per acre of the 19-19-19 fertilizer, which delivers 38 pounds per acre each of N, P (as P2O5), and K (as K2O) per acre, and even this was not always done annually. The field was cut for hay every year for at least a decade. So, this field was grossly under fertilized for potassium every year, understandably resulting in low fertility for that nutrient.

It is easy to under apply potassium to hayfields. Almost 100% of the minerals present in a hay crop are removed from the field. Hay crops remove three to four times as much potassium as phosphorus. Most soils cannot replace the potassium as fast as it is removed, and continuous haymaking without adequate nutrient replacement will severely reduce the available potassium in the soil. 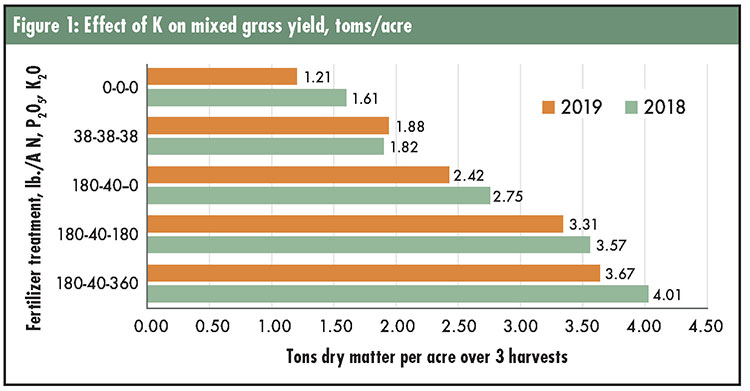 The results were dramatic. Annual yields for the plots receiving nitrogen, phosphorus, and potassium were over 2 tons per acre greater than the unfertilized plots in 2018 and 2019 (Figure 1). The potassium addition alone was responsible for half of the yield boost. By the end of the second year, the proportion of tall fescue in fall botanical separations went from 17% in the unfertilized control to 100% at the highest rate of nitrogen and potassium (Figure 2). 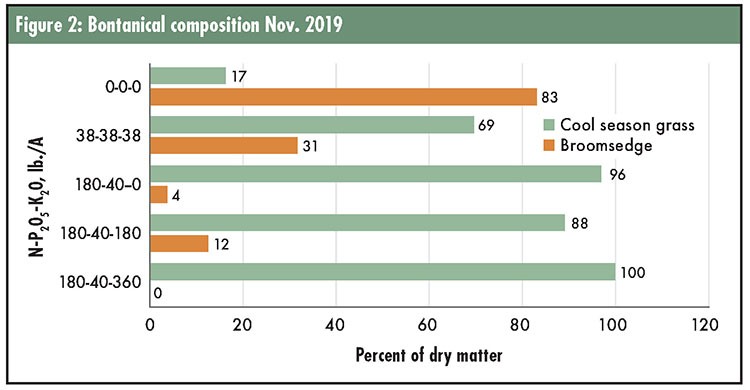 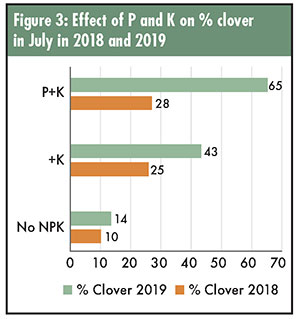 Fertilization had an unexpected benefit. Plots receiving phosphorus and potassium, but no nitrogen, had a marked improvement in the percentage of red clover (visual basis, Figure 3). This clover was all volunteer, since no red clover had been overseeded on this field in over a decade.

There are many takeaways from this trial. First, proliferation of broomsedge is not only a low pH issue, it can also be due to low fertilization with nitrogen as well as potassium. Second, low potassium will prevent nitrogen fertilizer from having its full yield-enhancing effect. Third, getting phosphorus and potassium fertility to optimum levels on unimproved forage fields can greatly stimulate clover, even when it has not been seeded recently.

Yes, some of the levels of fertilizer used were high, but not unreasonable. These fertilizer rates would be expensive, but not more expensive than killing a field and starting over. The positive effects and payback were seen in the first year.

So, maybe it is time to give potassium a little more respect as a component of a complete fertilizer program.

Make your grass selections carefully Next