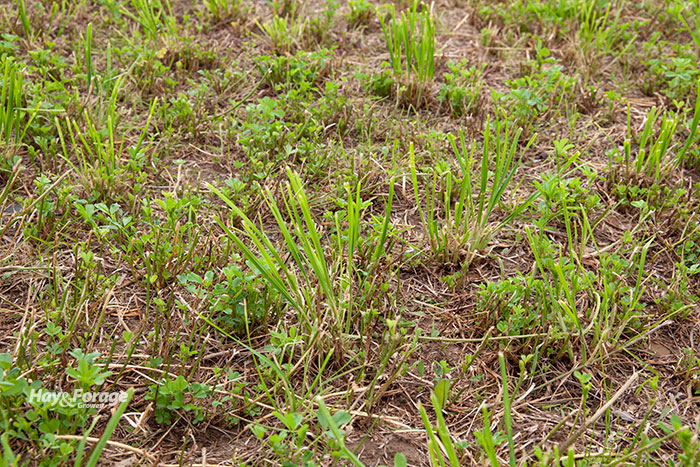 All you have to do is call

You've got a friend

These lyrics from a 1971 song by Carole King remind us that we all need a friend. The same is often true for alfalfa, and its compatriot usually comes in the form of a cool-season grass.

There are several good reasons to add a grass component to an alfalfa seeding. One is merely a matter of keeping a productive stand in areas where alfalfa persistence is a challenge.

“While legumes often have exceptional nutritional quality and are essentially capable of fixing their own nitrogen fertilizer, they can be difficult to maintain in monocultures,” notes Allen Wilder, a forage agronomist with the Miner Research Institute in Chazy, N.Y. “This is because forage legumes are susceptible to numerous stresses involving soil conditions, pests and diseases, and winter injury. That is why most forage legumes seeded in the Northeast are planted as a mixture with one or more cool-season grasses,” he adds in Miner’s Farm Report newsletter.

A second reason why an alfalfa-grass mixture might make sense is from a nutritional standpoint. When harvested before heading, grasses provide abundant neutral detergent fiber that is highly digestible. This digestible fiber is beneficial for proper rumen function.

Finally, for those selling hay, there is a strong market demand for alfalfa-grass mixtures. It’s not uncommon to see commercial hay growers who can easily grow monoculture alfalfa still maintain some of their acres in alfalfa-grass mixtures to meet client demands. In some cases, the perennial cool-season grass is interseeded into a two- or three-year-old alfalfa field to extend productive stand life.

Wilder recommends that careful consideration be given when selecting a cool-season grass to complement alfalfa. If alfalfa winter injury is a problem, the selected grass needs to be winterhardy. In such situations, it might also be beneficial to select a spreading or sod-forming grass to help fill bare areas.

Forage quality is another important consideration. There are distinct differences in forage quality between species and, in some cases, between varieties of the same species. In the case of orchardgrass, for example, there are early- and late-heading varieties available. When paired with alfalfa, a late-heading variety is almost always preferred to better match the optimum harvest maturity of alfalfa.

Some cool-season grasses hold a distinct advantage from a forage quality standpoint. In Northern states, perennial ryegrass and meadow fescue often fall into this category, with the latter being longer lived and an increasingly more popular choice to partner with alfalfa. Cornell University’s Jerry Cherney is doing some useful research in sorting out varietal differences among meadow fescue varieties.

There is one important word of caution when selecting a grass companion for alfalfa: Grass performance is contingent on the region or area where it is grown. Alfalfa yield and quality is much more stable across environments than that of grasses. As a result, choose grasses based on performance data from your own state or region, assuming the trial was done in an environment similar to your own. If this type of information isn’t available, then some on-farm testing of your own might be needed.

Wilder cited a recent University of Vermont study that evaluated timothy, tall fescue, meadow fescue, and perennial ryegrass grown with either alfalfa, red clover, or birdsfoot trefoil. The legume-grass mixture was then compared to the pure legume stand.

The various treatment field plots were cut either three or four times per year to evaluate performance under two cutting interval regimes. The plots were cut to a 4-inch height.

The grass generally contributed slightly less than 25% of the total season yield. Of the four grasses, timothy provided the highest total-season yield when averaged across the three legumes. Perennial ryegrass had the lowest yield while the two fescues were intermediate and about the same as the pure legume stand.

When evaluating forage quality, it was found that potential neutral detergent fiber (NDF) digestibility (NDF-undigested NDF at 240 hours) was dependent on cutting schedule and grass species. Meadow fescue performed well under the more intensive cutting regime, but it had the lowest potential digestible fiber when a delayed cutting approach was used.

Timothy offered the best forage quality in the three-cut system. “Using timothy as a companion grass could allow for greater harvest flexibility and maximize total dry matter yields,” Wilder notes. “Timothy was highly aggressive at first cut but backed off during the subsequent cuts, allowing the legume to take advantage of the summer heat.”

Wilder emphasizes that the results from this one study only be used as a part of the grass selection equation. Generally, it will take multiple studies and some on-farm experimentation to find the best suited grass for your farm and cutting management.

From a small bag of seed Next