The author is an alfalfa breeder with S&W Seed Company. 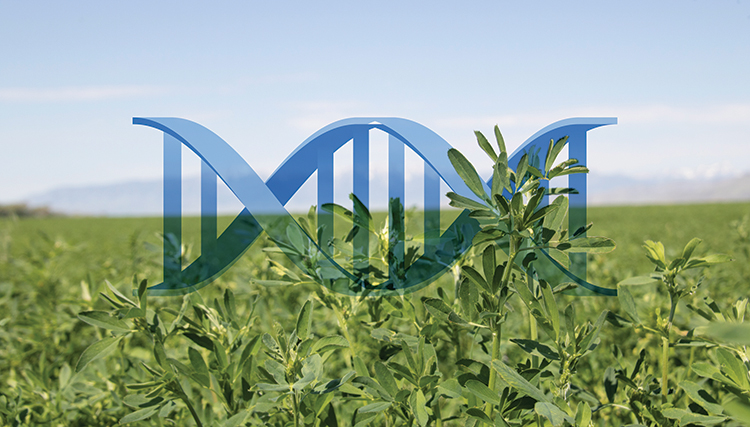 Alfalfa is the third highest revenue crop in the U.S., behind corn and soybeans, but ahead of wheat, rice, and cotton. Despite this, research spending on alfalfa is far behind these crops of lesser market value. This is one of many reasons that biotechnology traits in alfalfa have been slow to come to market. Corn, soybean, and cotton have paved the regulatory path allowing other crops like alfalfa to follow.

Alfalfa research at universities and in the private sector has been in a steady decline over the last several decades, resulting in less alfalfa breeding progress. Alfalfa research is a long, time-consuming endeavor; therefore, breeders have been finding new ways to speed up the process using new biotechnology techniques.

There are two biotech methods used in alfalfa today: GMO, or genetic modification by insertion of foreign DNA that results in a genetically modified organism, and gene editing, or the use of precision breeding technologies that result in edited target genes with no foreign DNA being added.

Recently, S&W Seed Company has teamed up with Calyxt, a plant-based technology company located in Minnesota, to develop improved digestibility alfalfa through gene editing. Calyxt used its proprietary TALEN gene-editing technology to inactivate one of the genes in the lignin biosynthetic pathway, resulting in an Improved Quality Alfalfa (IQA) trait. This new trait promises to make real and substantial improvements in alfalfa feeding quality via a non-GMO approach.

Alfalfa agronomic performance has been predominantly advanced through traditional breeding techniques. Significant gains in disease resistance have been made by selecting plants with one or more copies of resistance genes, and then intercrossing them to increase the gene frequency. This is a relatively simple, cost effective, and efficient system; however, it is time-consuming. Gains in forage quality improvement have been slower, and the expense of sampling mature plants in the field, environmental variability, and the high cost of analyzing forage samples all take resources from a research program.

Limited resources in alfalfa breeding means fewer plants can be evaluated for forage quality compared to disease and insect pests. Yield improvement in alfalfa is even more costly and time consuming because selection for yield requires field trials over many years and locations, involves many different genes, and environmental effects slow genetic gain.

Alfalfa plant breeders are now starting to use new technologies that accelerate genetic gain or create new and novel traits. The first biotech trait released to the market in alfalfa was Roundup Ready, a GMO trait that closely followed the blueprint of corn and soybeans. The gene conferring resistance to glyphosate herbicide, originally isolated from a bacterium, was inserted randomly into the alfalfa genome. Plants containing the gene were selected by spraying with the herbicide and then used for further variety development. By continuing to select resistant plants, varieties were developed relatively quickly that had acceptable disease resistance and yield.

In 2017, the second GMO trait in alfalfa, HarvXtra, was introduced. HarvXtra confers higher quality by reducing lignin deposition in plant cell walls. Lignin is indigestible to cows, so reducing the lignin content in alfalfa plants results in a feed with higher fiber digestibility. With HarvXtra, the lignin is reduced by inhibiting expression of one of the genes in the lignin pathway through a transgenic RNA-interference mechanism.

The advantage of GMO technologies is that entire genes from other species (and resulting traits) that are completely new to the crop can be inserted. For example, with the GMO approach, a gene can be inserted to produce a protein that is toxic to certain insects but harmless to humans or even other classes of insects. Examples of this type of trait are the Bt traits in corn and cotton. The current disadvantages of GMO-based breeding include the high regulatory hurdles associated with their development, export acceptance by some countries, and a sector of the public that doesn’t look favorably on the “GMO” designation.

Gene editing (or genome editing) is a recently developed technology that holds promise to deliver new breakthrough traits in many crops. It is the same technology that is being used in the human medical field to correct genetic disorders, such as leukemia in infants. Gene editing involves the targeted deletion or replacement of DNA at a specific site in the genome of an organism or cell.

Engineered nucleases, or “molecular scissors,” are used to cut the DNA strands at specific sites. This is different to the random insertion of genes for GMO products, using vectors to deliver the desired gene(s). The two main families of gene-editing technologies are Clustered Regularly Interspaced Short Palindromic Repeats (CRISPR) and Transcription Activator-Like Effector-based Nucleases (TALEN). Each has its advantages and disadvantages.

The CRISPR system advantages are that it is quick, simple, easy to use, and freely available to universities and nonprofit organizations for academic research. Unfortunately, the intellectual property landscape surrounding CRISPR is complicated, making commercialization uncertain.

The TALEN system is a more precise and efficient method of gene editing. TALEN has been used successfully in soybeans to improve oil quality, in potatoes to improve storage life, and now in alfalfa genetics to improve fiber digestibility. Alfalfa products made with the TALEN technology do not contain any foreign DNA and are considered nonregulated articles by the USDA. Another key advantage of using TALEN is a clear path of intellectual property (IP).

Traits that can be developed with gene editing are somewhat limited compared to the GMO approach. Gene editing can modify genes that are already present in the plant, modifying the expression of a particular trait, but rarely can it be used to produce a whole new function. However, gene editing can help produce novel and beneficial genetic gain that would otherwise take several decades, if not more, to obtain through conventional breeding.

Lignin biosynthesis is well understood, as it has been studied in many different plant species. Therefore, it was a suitable target for using the TALEN technology to reduce lignin accumulation in alfalfa. In Calyxt’s gene editing approach, a small deletion in one of the genes in the lignin pathway makes it nonfunctional, resulting in reduced lignin levels. In the process of editing this gene, no foreign DNA is introduced into the plant’s genome, making it non-GMO.

After the initial TALEN gene edits were made, plants were then screened to confirm they had the desired trait as well as the absence of foreign DNA. These initial plants were then crossed to elite, high-yielding, disease-resistant plants. Seed from this initial cross that contained the edited gene for the trait were intercrossed.

Each round of crossing results in a larger population of plants with a higher frequency of the desired lower lignin trait. Plants are then tested for lignin content and other standard forage quality metrics. Experimental varieties are currently being developed and characterized for pest resistance, yield, and other important agronomic traits. S&W’s current variety development timeline will have products available for 2021 in limited supply for large-acre commercial evaluation.

For gene editing to be used successfully, you need to know two things: which trait to develop and which gene to target. This doesn’t seem like a lot, but as the molecular mysteries of alfalfa continue to be solved, we are constantly moving closer to using gene editing for things like yield, drought resistance, salt tolerance, and bloat resistance. Advancing these traits are in the future and will likely depend on the success of the reduced lignin trait efforts.

Traditional breeding will not go away anytime soon. It is still the foundation of all breeding programs to develop genetically diverse, stable, high-yielding, and pest resistant germplasms that gene editing can take to the next level. Ultimately, the dairy and beef producers of the world will be the beneficiaries of gene-edited traits in alfalfa.

This article appeared in the November 2020 issue of Hay & Forage Grower on pages 14 and 15.

From a small bag of seed Previous