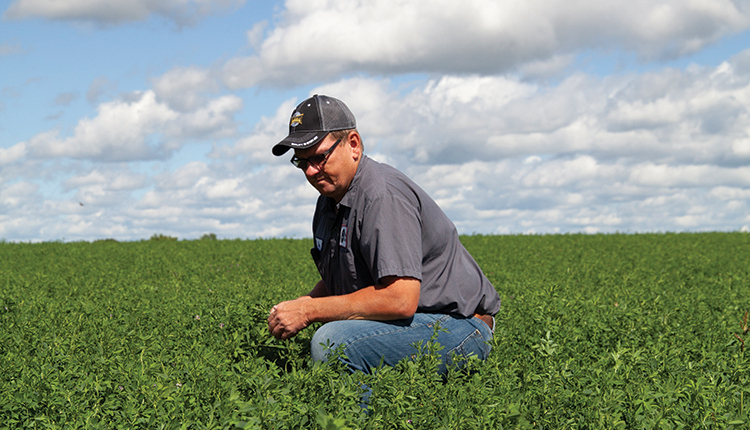 Dan Scheps likes the harvest flexibility that the HarvXtra trait offers.
It's now been five years that alfalfa varieties with the HarvXtra trait have graced the pages of seed company brochures. Currently, nearly 25 different alfalfa brands are marketing at least one variety with this relatively new technology.
HarvXtra was many years in development before reaching the market in 2016 as alfalfa’s second transgenic trait and the first not to be tied to herbicide resistance, although all HarvXtra varieties come packaged with glyphosate resistance. Through down regulation of lignin synthesis, alfalfa growers were promised a plant with reduced-lignin content and higher forage digestibility compared to conventional varieties managed similarly. Lignin is virtually undigestible, even for a ruminant animal, so this was a big deal.
Independent university research results with HarvXtra alfalfa varieties have largely proven that its marketing promises had merit. In numerous studies, HarvXtra varieties outshined the competition for improved forage quality when cut at the same time as conventionally bred ones, even those touted as having enhanced forage digestibility. Further, a delayed harvest resulted in similar forage quality and greater yields than conventional varieties cut five to seven days earlier.
But the trait technology comes at a cost, at least in terms of initial monetary outlay. For this reason, some alfalfa growers have shied away. Additionally, HarvXtra alfalfa hay still does not have regulatory approval for feed and food export shipments to China.
Five years on the market has been a long enough time for a farm operation to now have seeded its entire alfalfa acreage base to HarvXtra varieties, assuming a four-year or less rotation. Hay & Forage Grower thought it might be interesting to track down a couple of these producers and see why they took this path, if they’re satisfied they did, and how they have chosen to manage the transgenic technology.
Here’s the next thing
Foresight Farms is owned and operated by Dave and Jean Wise. They farm with their sons Jared and Ethan and Ethan’s wife Allie. Except for those acres designated for heifer feed, all of their alfalfa is HarvXtra, and that’s been the case since 2019. Wise and his sons milk 1,060 cows and farm about 2,600 acres near Decorah, Iowa. Some of the acres are devoted to cash grain production.
Brown midrib (BMR) corn silage and alfalfa anchor the dairy’s forage program, although they also harvest some winter rye silage in the spring. The farm’s lactating cow ration currently sits at 56% forage, consisting of a 3-to-1 ratio of BMR corn silage and HarvXtra alfalfa, respectively.
“Something major we did about 10 years ago was to start working with a different dairy nutrition consultant,” Dave said. “One of the first things he did was to insist we plant BMR corn for the lactating cows. Then, when HarvXtra came along, he said, ‘Okay, here’s the next thing.’”
The first fields of HarvXtra alfalfa were planted in 2016. Roundup Ready alfalfa had been seeded on the farm before HarvXtra was available. “It was initially hard to justify the additional cost, but we’ve been pleased with what has transpired with the cows,” Dave explained. “We recently hit a 100 pounds per day average for energy-corrected milk.”
The new nutritionist that Foresight Farms hired 10 years ago was Marty Faldet. He works as a part of the GPS Dairy Consulting group and is based in Lakeville, Minn. Faldet has many of his clients on the HarvXtra program. “Some of the dairy farms I work with like the idea of extending the cutting interval a few days,” Faldet said. “Instead of taking a fourth cutting in mid-August and not being able to get a fifth cutting, they can stretch out the growing season into late August. Previously, the low yield on the fourth and fifth cutting, if they took one, made for expensive forage.”
The nutritionist said that some of his clients believe the longer cutting interval, when coupled with the ability to spray for weeds at any time, will add a year to their alfalfa’s stand life.
A transition period 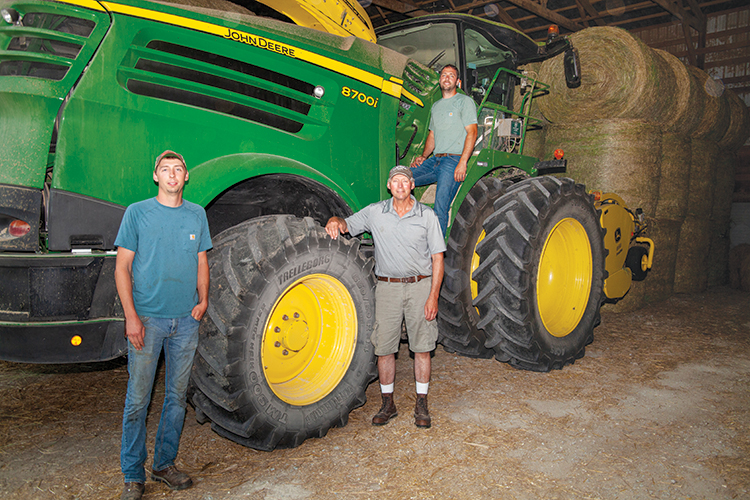 From left to right, Jared, Dave, and Ethan Wise began with HarvXtra at the urging of their nutritionist.
The Wises base their cutting times on days and plant height, targeting a relative forage quality (RFQ) of 165 to 175. “It was hard when we were first making the transition because we had both conventional and HarvXtra varieties, so you couldn’t really base your cutting just on one type or the other,” noted Ethan.
These days, with their alfalfa fields all seeded to Croplan or Pioneer HarvXtra varieties, it’s much easier to assess cutting intervals. “If the weather cooperates, we go on about a 30-day interval,” Ethan said. “Before HarvXtra, we usually cut at 26 days. Last year’s fourth crop was at 35 days, and we also tend to delay our first crop.”
Jared noted that they like the insurance aspect of the trait. “If we get delayed by weather, like during the spring of 2019, the HarvXtra does a better job of holding quality,” he said. “We’ve been applying foliar fungicide to our fields prior to first and third crops, and insecticides get applied prior to every cutting. We also apply glyphosate between the third and fourth cuttings to clean up any weeds.”
The Wises make both spring and late-summer alfalfa seedings. They usually use an oat companion crop in the spring, harvest the oats as oatlage for the heifers, then spray the field with glyphosate to clean up any oat regrowth, weeds, and the small percentage of nonglyphosate-tolerant alfalfa plants. Their seeding rate is 18 to 20 pounds per acre when the seed coating is one-third of the weight.
So far, the Wises have been pleased with their HarvXtra experience. “I think we have seen the benefit of feeds like HarvXtra alfalfa and BMR corn,” Dave noted, “but you have to have a nutritionist who has experience with feeding highly digestible forages. You hear horror stories on some farms that have tried it but then didn’t make the appropriate ration adjustments,” he added.
A friend got him started
Dan Scheps and his older brother, Ken, grew up on a 40-cow dairy not far from their present location near Almena, Wis. Following Dan’s graduation from college and a five-year stint working for an animal nutrition company, the two brothers started a 400-cow dairy in 1999. Through a progressive expansion of both buildings and animals, the unit has now grown to 1,600 cows, which are milked three times per day.
Scheps Dairy Inc. consists of about 2,500 crop acres, growing corn for silage, alfalfa, and high-moisture corn. Like Foresight Farms, all of their lactating cow forage consists of BMR corn silage and HarvXtra alfalfa. In total, they grow nearly 800 acres of alfalfa.
“We feed about 22 pounds of corn silage and 12.5 pounds of alfalfa haylage on a dry matter basis,” Dan Scheps explained. “Rations are balanced for 60 pounds per day of dry matter intake.”
The Schepses currently feed more alfalfa than what is seen on many farms, and that was precipitated by a storm in 2019 that flattened a lot of the farm’s corn acres, drastically reducing their corn silage inventory. Scheps noted that they will probably move down to about 8 to 10 pounds of alfalfa dry matter in the ration once the 2020 crop is harvested and ready to feed.
Scheps said that he was first introduced to HarvXtra alfalfa in 2015. “I have a close, personal friend from my nutritionist days who ended up working for Forage Genetics International,” he said. “They wanted to put in some small on-farm plots in 2015, so he contacted me to see if I’d be willing to help. That was our first 15-acre patch, and we’ve progressively seeded down our entire alfalfa acreage to HarvXtra since then.”
The transition was helped along by some severe alfalfa winterkill in the spring of 2019. “We had to seed over 500 new acres in 2019 and that completed our transition to HarvXtra,” said Scheps, who currently favors the Nexgrow alfalfa brand.
The Schepses have chosen not to eliminate a cutting of alfalfa by extending the alfalfa cutting interval, but they have had to take advantage of the delayed cutting insurance policy that inherently comes with the HarvXtra trait. For 2020’s fourth cutting, they had to extend their cutting interval to 35 days because of a needed insecticide and fungicide application and the postapplication harvest interval required by the chemical products. Of course, they’ve also been delayed by weather from time-to-time.
“We’ve always liked to give one cutting a longer growing interval to help enhance winter survival,” Scheps noted. “By doing so, we don’t take as big of a quality hit with the HarvXtra compared to the conventional varieties.”
Scheps said he hasn’t noticed any major agronomic differences between the HarvXtra varieties and the conventional ones he grew previously. “This year will be the first year that the farm will average 5 tons per acre of dry matter across our entire acreage,” Scheps mentioned. “That should be accurate because everything harvested goes across our drive-over scale.”
The northern Wisconsin dairyman said it’s been difficult to assess cow performance changes as a direct result of feeding HarvXtra alfalfa. “We built our last cow barn in 2017 and expanded the herd, so there are a lot of confounding variables,” Scheps said. 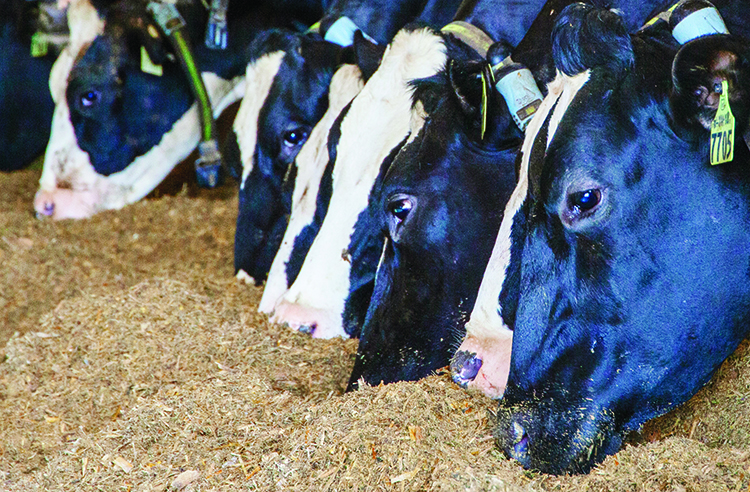 The milking cows at Scheps Dairy consume a TMR that includes both brown midrib corn silage and HarvXtra alfalfa.
More than technology
As with any new technology, there needs to be appropriate management applied to realize its full benefit. The HarvXtra trait is no different.
Scheps explained that they seed their alfalfa in the spring, using 18 pounds of seed per acre and no companion crop. Once a field is tilled and prepared, it then gets rolled before seeding with a John Deere 40-foot no-till air drill. Two or three cuttings get harvested in the seeding year followed by four cuttings in the subsequent production years.
Similar to Foresight Farms, the Schepses use glyphosate to keep weeds at bay in their alfalfa fields. That application is made after fourth crop is harvested each year. “It really helps to control the dandelions during the following year,” Scheps noted. “It makes a big difference.”
Scheps is also vigilant to limit wheel traffic damage in his alfalfa fields. Each semi-truck and trailer is equipped with flotation tires. Additionally, truck drivers must adhere to a controlled traffic pattern when driving in alfalfa fields. “We only allow U-turns if they’re less than one-half of the way into the field,” Scheps explained.
“We’ve been happy with HarvXtra and don’t really have any plans of changing right now,” Scheps said. “My friend who got me started now works for a seed company that doesn’t offer HarvXtra varieties, but I told him that I’m not switching back,” he chuckled. Apparently, friendship loyalty only goes so far.
This article appeared in the November 2020 issue of Hay & Forage Grower on pages 24 and 26.

Short in stature but big on success Next