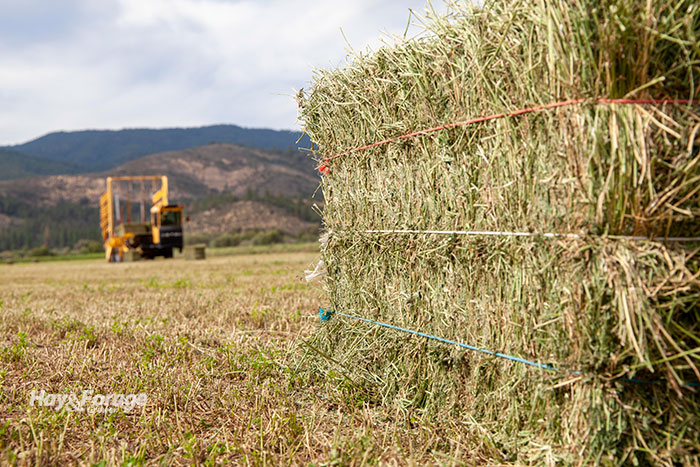 For the second consecutive year and the third time in four years, total U.S. hay exports in 2020 eclipsed 4 million metric tons (MT). This was accomplished largely because China got back into the alfalfa trade market in a big way compared to the last two years. 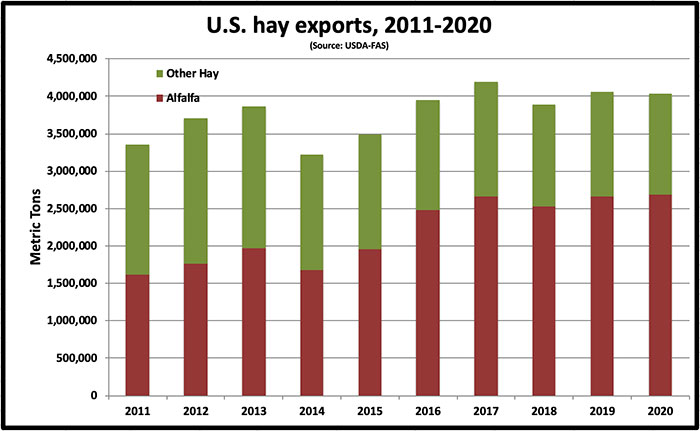 A big alfalfa bounce back

With China’s dairy industry putting renewed interest on high-quality alfalfa hay and fewer tariff restrictions in 2020, that country set a new annual record for alfalfa hay imports from the United States (see Figure 2). There was some fear during the high-tariff months that China wouldn’t return to the U.S. alfalfa trade market even after tariffs were lifted, but that doesn’t seem to be the case.

The good news for U.S. alfalfa exports in 2020 stops with China. Following five years of slow but steady growth of importing U.S. alfalfa hay, Japan’s total dropped off by 9.4% in 2020.

For several years, we have heard reports of a Saudi phase out of alfalfa production to conserve water. Although that may have occurred to some extent, it isn’t happening rapidly, and we now need to question if import volumes of alfalfa will ever reach levels being anticipated a few years ago. Even so, we need to keep in mind that as recently as 2014 the Saudis were essentially nonplayers in the U.S. alfalfa export market.

Rounding out the top five of U.S. alfalfa importers in 2020 were South Korea and the United Arab Emirates (UAE). Alfalfa exports to South Korea (221,660 MT) were down 8% from 2019 but exceeded that of UAE for the first time in many years (and maybe ever). This was primarily because of a drop in the amount of alfalfa hay being shipped to UAE, which only totaled 160,878 MT. As recently as 2013, the UAE had imported 661,800 MT of U.S. alfalfa hay. 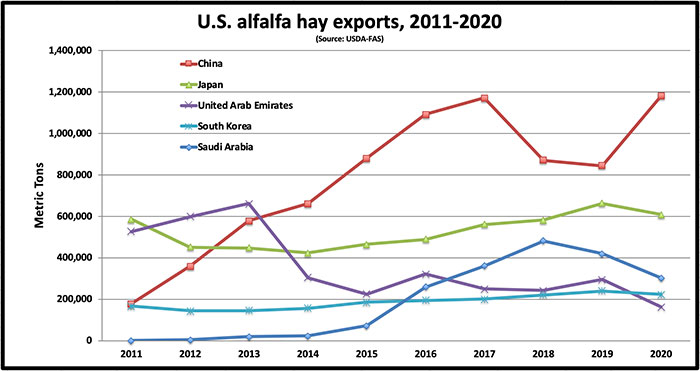 Japan leads all export partners for nonalfalfa hay. They imported 802,897 MT in 2020, 4.2% more than the previous year and the third year in a row of volume growth (see Figure 3).

South Korea, the second-leading importer of nonalfalfa hay, finished the year with a total of 322,414 MT, which was down 4.2% compared to the previous year, and the country’s third year in a row of declining grass hay imports from the United States. 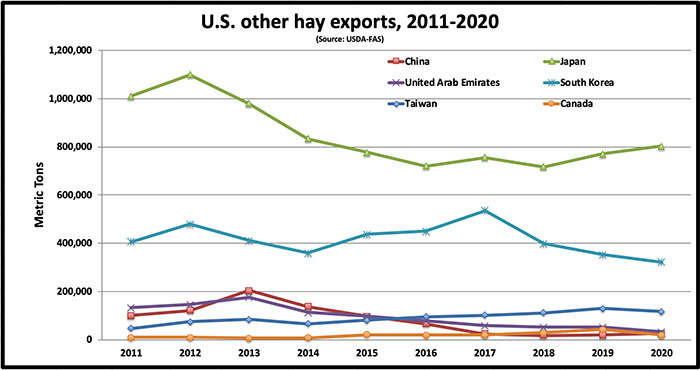 Total hay exports in 2020 exceeded 4 million MT for the third time in four years. This was largely due to a 40% jump in the amount of U.S. alfalfa hay imported by China during the year. In the previous two years, government-imposed tariffs severely cut the amount of alfalfa hay being shipped to China.

Hay exports still remain a small portion of total U.S. hay production. Based on USDA data for 2020, only 3.5% of all U.S. hay produced and 5.6% of all alfalfa hay enters the export market.

According to Dan Putnam, University of California forage extension specialist, hay exports make up about 41% of the grass hay production and 17% of the total alfalfa production in those combined states. As such, hay prices in these states play a large role in setting market prices.