It’s not your typical organic dairy 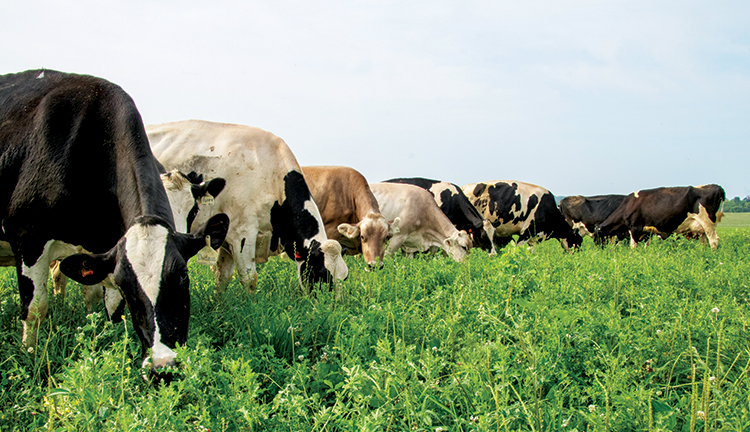 Prairie Star Farms has integrated many so-called conventional management practices into a successful and profitable organic dairy.
The greeting sign reads Prairie Star Farm, and as you turn into the drive, you may find any one of John and Meghan Palmer’s five children running between the buildings. During my visit, all of them were washing heifers to get ready for the county fair.

Having arrived at the northeast Iowa organic dairy farm just after milking, I found John Palmer walking the break wire across the paddock, getting ready to turn the cows out to graze. As he did, we made a quick lap through the paddock, noting the different pasture forage species. Once the gate on the freestall barn opened, we watched the cows pick and choose plants to graze.

“My wife says if she is going to milk cows, she wants them to give enough to make milking worth it,” Palmer joked. To maintain a herd milking average over 20,000 pounds, the Palmers grow their own crops for their total mixed ration (TMR), which includes grain, corn silage, and alfalfa haylage.

No, this isn’t your typical organic or low-input grazing dairy. “Yield is vanity, profit is sanity,” Palmer professed. “Having a lot of yield and spending a ton of money to get it doesn’t make any sense, but accepting low production and conditions I don’t enjoy wouldn’t be success for me, either.”

When the cows come home 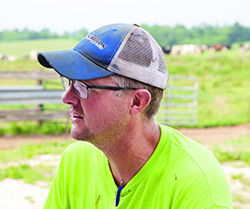 “Yield is vanity, profit is sanity,” Palmer said. However, he also doesn’t accept low production.
The Palmers didn’t start their dairy career on the 240-acre farm they now own, but both Palmer and his wife come from farming families.

Palmer planted the first crop of his own in 2002 on land he rented that neighbored his father’s farm. As a young college student, Palmer came home on the weekends and over breaks to help his dad farm. Soon he was farming as many rented acres as his dad owned. That’s when the young married couple decided it was time to head off on their own.

In 2003, they found a farm for rent and transitioned it to organic production. Meanwhile, they bought the building site and a herd of 50 grazed Holsteins. In 2006, they started shipping milk to Organic Valley dairy cooperative, which continues today.

The final move was to Meghan’s home farm a little over five years ago. The farm had already been in organic production for many years. Before he passed away, they worked with Meghan’s father to purchase the 240-acre farm. Previously, it ran as an organic dairy with the help of a herdsman who bought her father’s herd and moved to his own farm at the time of their purchase.

When they were taking over the daily routines and building a new freestall barn at Prairie Star Farm, Palmer was still managing and milking 140 cows at the farm they had just moved from.

“I was getting to the point where I was not very much fun to be around,” Palmer noted. “To simplify things, my hired man bought 50 cows and 50 heifers from us and started on his own. He took over the lease and bought the previous building site, too.”

These days the Palmers own 240 acres, rent about 400 more acres on four other farms, and recently added a full-time employee to the scheme. Palmer crops close to 500 acres of organic corn, soybeans, small grains, and hay. The remaining 140 acres are in permanent pasture.

“I want to be able to grow my own grain because it’s too expensive to buy,” Palmer said of organic grain. So, he harvests and stores enough grain corn, soybeans, oats, and barley, along with corn silage, alfalfa haylage, and baleage to feed his cattle for the year.

During the 2020 growing season, Palmer participated in a cover crop demonstration, which was organized by the local United States Department of Agriculture (USDA) and Natural Resources Conservation Services (NRCS)offices. He planted a mix of cowpeas, ryegrass, buckwheat, and turnips into standing corn. The hope is that the cover crops will help with weed control and provide late-season grazing opportunities.

Cows at Prairie Star Farm receive a partial TMR even when they are able to graze and move to new paddocks twice a day. Palmer provides about 30 pounds of corn silage per cow each day to help meet nutrient requirements and maintain production.

He also finds that using both bagged haylage and round bale baleage is a positive economic move for his farm. “We cut down on spoilage by feeding baleage as needed during the grazing season,” he explained. “But the bag of haylage is great during the winter when I need a large amount of feed.”

The Palmers grow their own organic grain, including corn. In 2020, they interseeded a cover crop (left) into some of the corn as a part of demonstration project. “I want to grow my own grain because it’s too expensive to buy,” Palmer said.

“We haven’t reseeded any of the grazing paddocks since we moved here,” Palmer shared.

Knowing that one day it may be necessary, the Palmers have had many discussions about reseeding, but they haven’t felt the need to do so yet.

Palmer stays away from completely destroying paddocks as much as he can. With gradual improvements, he feels encouraged to better his forage quality through management decisions instead of reseeding.

“Grazing management brings out a lot of surprising things, and no two paddocks are the same,” he explained. “Between grazing and clipping, we knock back what’s there really hard, and that allows other species to come back.”

The pastures vary as you cross the farm. Fertility differences caused by old fences and distance from the barn are noticeable. Some of the tillable pastures have laid undisturbed for 15 to 20 years.

“The first couple of paddocks closest to the barn have some of the highest fertility on the entire farm, and they produce great forages,” Palmer stated. “There aren’t many legumes in the back corner, but we are actively working to improve fertility, pasture diversity, and productivity,” he added.

Palmer advises that if you can work with what you have long enough to let your system balance itself, you just might be better off than spending that extra time, money, and energy tearing up the land and restarting.

Cows head to the pasture after milking and eating a partial total mixed ration. The dairy herd is offered fresh pasture twice per day and is moved back to the barn when summer daytime temperatures get too hot.

The existing buildings have received several renovations over the years, and Palmer has also added a few new structures that were built to his liking.

Eighteen years ago, Palmer helped his father-in-law build the milking parlor. Now, it operates as a swing-12 with Dairy Master milkers.

A former layer hen building was renovated to raise heifers. “We ran a couple of flocks, but we aren’t chicken people,” laughed Palmer.

The former freestall barn has been repurposed to group-raise calves. The structure is tube ventilated and has five pens. The barn welcomed its first group during the fall of 2019.

Another addition to the farm is the fly vacuum. As organic dairy farmers, the Palmers are limited on fly control options. They explained that using mineral oil and organic fly control makes a notable difference, but sometimes it’s not enough. After evaluating research, Palmer bought a used Spalding Cow Vac from the University of Minnesota to enhance his fly management program.

“For me, it was an easy investment,” he said. “It’s amazing how much happier they are, how much less they bunch, and how much less milk we lose if we can keep the flies from driving them insane,” Palmer informed.

Yet another one of Palmer’s investments is the freestall barn, which was added after the Palmers gained ownership. Loaded with sprinklers, brushes, and surfaced outside areas, this barn is utilized for cow comfort year-round.

While Holsteins account for the majority of the herd at Prairie Star Farm, there are a few Brown Swiss and Milking Shorthorns as well. 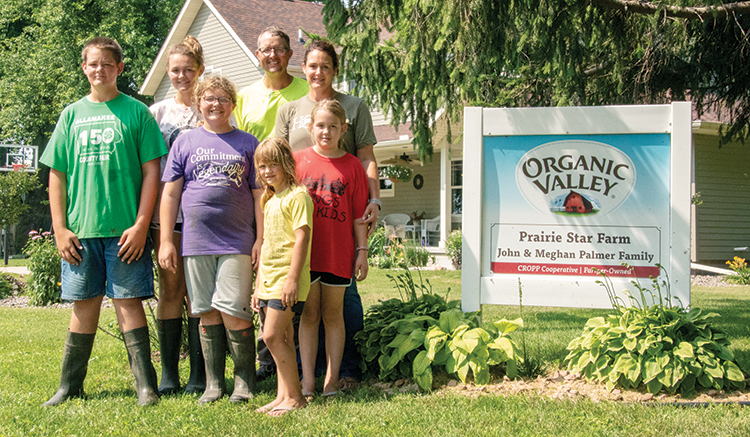 Everyone in the Palmer family is actively involved in the farm. Front row (left to right): Ethan, Norah, Roslyn, and Naomi. Back row: Faith, John, and Meghan.

All in the genes

In the early days, the Palmers incorporated New Zealand Friesian genetics, but as time went on, the cattle became a little too small and had lower production than they liked.

So, to correct the production deficit, they reintroduced U.S. Holstein genetics to their breeding program. They also intensively select for health traits, components, and moderate stature.

For seven years, the Palmers have almost exclusively used polled A.I. bulls. Along with this, they are selecting for A2 milk protein genetics.

“We are pretty close to having everything on the farm genomic tested,” Palmer asserted. Once he reaches his homozygous trait goals for the polled trait, the bull gene pool he can choose from will expand.

“When you get older, you hope that your career has yielded enough to afford the luxuries you want,” Palmer shared. “We also want to create a situation that, hopefully, the next generation will want to be a part of.”

He takes pride in the way his operation looks and functions and explained that he doesn’t want the jobs around the farms to be unpleasant for himself or those working for him.

Palmer is drafting plans for a new milking parlor to build in the next few years. “Milking happens twice a day, every day, and we’d like to enhance the experience and incorporate technology to add comfort and management options.

“I am all about preventing problems, maintaining the things we have, and creating the best environment I can for the animals and people creating my livelihood,” he declared.

Hay quality is a lifestyle at Hardrock Next