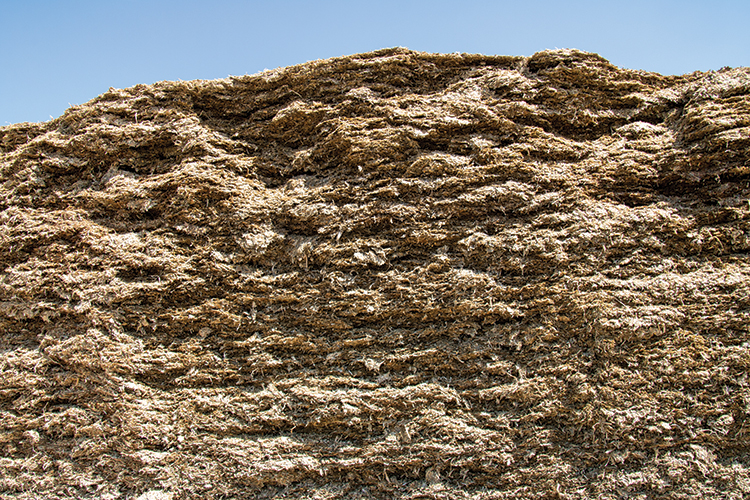 Lurking in every load of corn silage brought to the silo are wild yeasts. These microorganisms are a specific type of fungi that occur naturally on all plants and may be active with or without oxygen, depending on the type.

Yeasts vary in function. Some species are capable of fermenting free sugars in anaerobic (no air) conditions while others will “assimilate” or oxidize lactate aerobically (in the presence of air). A majority of species are tolerant of pH levels down to about 3. All of these traits set yeasts up to wreak havoc with an ensiled corn silage crop that is subjected to oxygen in the air.

“There are many different types of yeasts in corn silage, and the types present will vary from farm-to-farm and from crop-to-crop,” noted Limin Kung during his presentation at the virtual Penn State Dairy Cattle Nutrition Workshop last fall. Kung, a dairy nutritionist and renowned silage expert with the University of Delaware, said that we don’t really understand why this variation exists and what conditions favor certain species over another.

What we do know is that yeasts have the potential to cause significant damage to corn silage while in storage, at the silage face, and in the feedbunk.

Under anaerobic conditions, fermenting yeasts convert sugars to ethanol, carbon dioxide, and water. “This type of fermentation can be a problem,” Kung said. “For example, when these yeasts ferment glucose, there is only a 51% recovery of dry matter. So, for any silage that has a high concentration of ethanol, you can be assured that you’ve lost a significant amount of dry matter because of that fermentation process.”

Equally if not more destructive are the aerobic yeasts that oxidize lactic acid to carbon dioxide and water. “These yeasts also cause a large loss in dry matter and are the primary initiators of aerobic spoilage in silage and total mixed rations,” Kung explained.

When considered in total, aerobic instability during storage and feeding accounts for nearly 50% of the dry matter losses occurring in the silage-making and feeding process. Under poor management, dry matter losses from aerobic instability can be as high as 20% of the total dry matter that went into the silo. Kung emphasized that the dollar value of loss at this level can easily reach a six-digit figure on larger dairy operations without even factoring in reduced milk production.

With air, the dominos fall

“When air is introduced into silage, it starts a domino effect of undesirable activity and reactions,” Kung noted. “Air wakes up the lactic acid-degrading yeasts, and they multiply in numbers. As a result, highly degradable nutrients are destroyed along with a rise in temperature and pH. Next, the low pH allows molds and bacteria to become active, which causes more heating and massive spoilage.” 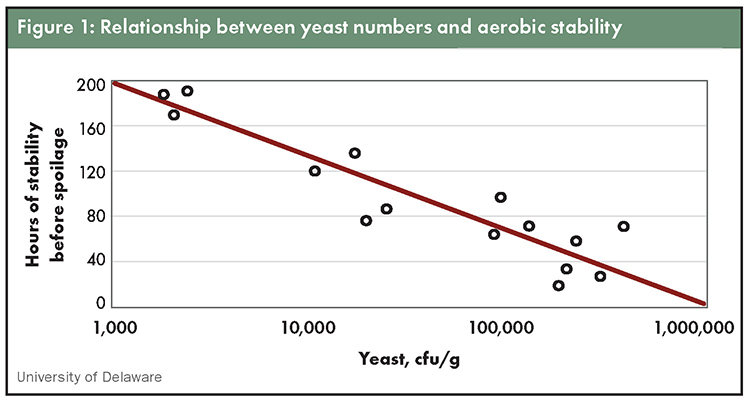 Preventing silage spoilage becomes a yeast numbers game (see Figure 1). A silage that starts out with a relatively low number of yeasts will remain stable and unspoiled for 60 hours or even longer, according to Kung. Conversely, if yeast numbers start out high, that silage may deteriorate in 12 hours or less.

“It’s a misconception that molds are the primary reason silages spoil,” Kung said. “Rather, it’s almost always because of these lactate-assimilating yeasts.” 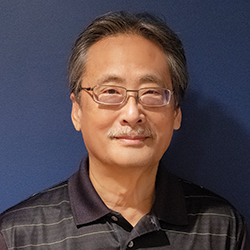 “Preventing silage spoilage is a yeast numbers game,” explained Limin Kung.
Kung shared some data from Cumberland Valley Analytical Services (Waynesboro, Pa.) that reflected yeast counts from over 700 submitted silage samples. He noted that values ranged from under 1,000 to over 250 million colony-forming units (CFU) per gram. In the silage expert’s opinion, farmers need to strive for 500,000 CFU per gram or less to have silage stable enough that it won’t deteriorate before animal consumption at the feedbunk.

“What we don’t know yet is exactly what is causing some of these negative impacts of feeding high-yeast silages,” Kung said. “Some hypotheses include that yeasts might produce mycosins that are toxic to the animal; there might be alterations in nutritive value imposed by the yeast being present; or it could just be a matter of organoleptic effects, things such as taste, smell, or hot feel.” Kung also suggests that yeasts might be causing problems by acid composition in spoiling feeds or in the rumen. Surprisingly, there are actually very few studies that have documented the effects of feeding spoiled silage to cows,” he added.

In one trial completed by Kung and his co-workers, either fresh (about 4,000 CFU of yeast per gram) or spoiled silage (nearly 90 million CFU of yeast per gram) was used in a total mixed ration (TMR). The fresh corn silage had been treated with Lactobacillus buchneri inoculant. The researchers incorporated the spoiled corn silage into the TMR at different levels ranging from zero to 40% and then measured the aerobic stability (see Figure 2). 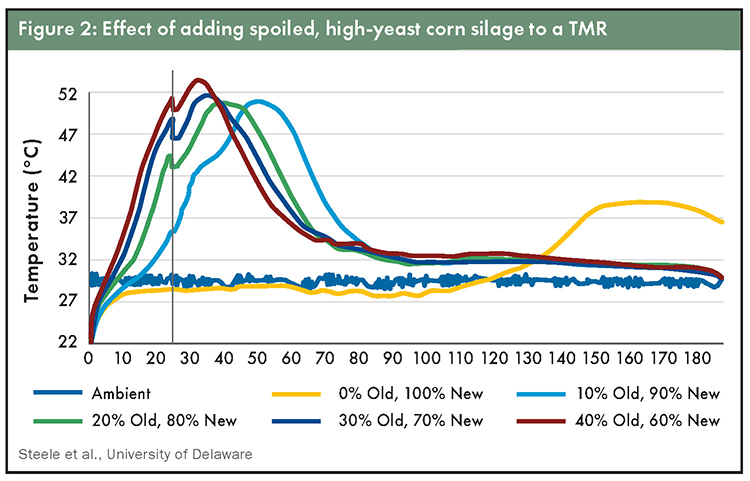 The overarching theme for minimizing wild yeasts in silages is pretty straightforward: Keep air out of the silage mass. That means ensure a high pack density, use a high-quality plastic with good oxygen exclusion properties, weigh the plastic down across the entire top surface and the ground perimeter, maintain an adequate feedout rate of at least 6 inches, and keep the face of the silo smooth.

If aerobic stability and high yeast counts have a history of being a problem or are predicted to be more likely, additives such as an L. buchneri inoculant or organic acids can be used. Silages with a high starch content, such as corn silage and cereal grain silages, are most likely to respond to these additives.

“All types of yeasts are undesirable in silages and TMRs, but it’s the lactate-assimilating yeasts that are primarily responsible for aerobic spoilage,” Kung noted. “Even though we don’t know exactly what the reason is for reduced cattle performance when feeding spoiled silage, we certainly know that top-notch silo management can reduce yeast populations and improve aerobic stability significantly.”

If you haven’t tested your silage for yeast levels recently, or if you’re having silage or TMR stability issues, it might be a good time to submit a sample to a reputable laboratory. If levels are greater than a half million CFU per gram, consult with your nutritionist to identify possible reasons for the high yeast count and evaluate ways your silo management might be improved in the future.

This article appeared in the February 2021 issue of Hay & Forage Grower on pages 12 and 13.

Forage for when the water runs out Next