How hay became a four-letter word

By Greg Halich
The author is an extension agricultural economist with the University of Kentucky and a grass-finishing cattle farmer in central Kentucky. 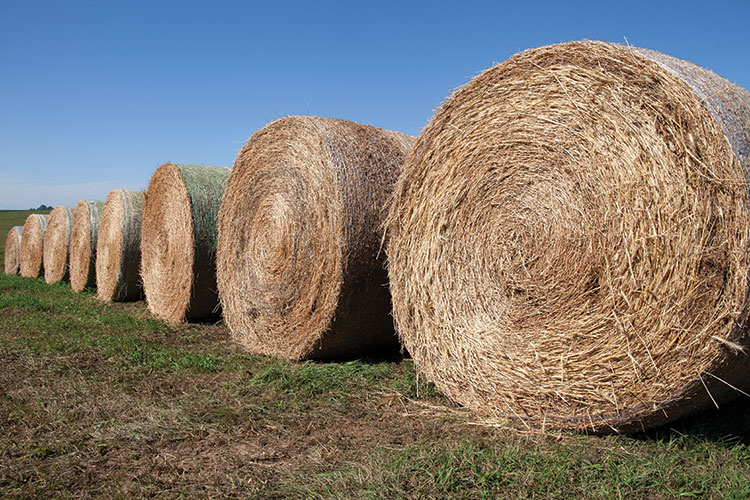 I’ve been waiting patiently for the inevitable to happen — for the word “hay” to morph into the word “haye,” or something similar.

In some circles of the progressive forage community, hay has already become a four-letter word. It’s been demonized for sucking out the profits on cattle farms and has stigmatized underperforming farmers who feed it as a sign of weakness. “Every day grazed is money saved” was the career-focused motto of at least one forage specialist, and many more have gone nearly as far, claiming grazing is always cheaper than feeding hay.

Many grass farmers have also jumped onto this bandwagon, trying to out-compete each other to see who can feed the fewest days of hay each winter, blindly assuming this will automatically equate to higher profits.

How did we get to the point where large numbers of farmers and members of the larger forage community started to believe that we needed to get rid of hay feeding on our livestock farms?

From what I can ascertain, there were two main causes. On the academic side, there was rudimentary analysis showing the average cost of grazing was shown to be cheaper than the average cost of feeding hay. If the cost of grazing is cheaper than feeding hay, then ergo, the more days we graze through the winter, the higher our profits will be. It was a simple, concise message, and a lot of key individuals in the academic community latched onto it.

On the popular-press side, there was the 2010 publication of “Kick the Hay Habit” by Jim Gerrish. The main theme of this book was that times had changed over the previous few decades, and that hay had become relatively more expensive, while what we were getting for our end product (calves) had not. He advocated that most cattle farms should be feeding no hay or something very close to that.

The book and its message were extremely popular with a subset of cattle farmers, many of these preferred to be known as “grass farmers.” These farmers became convinced that to be profitable, you needed to adopt the no-hay feeding philosophy, and a movement was born.

But were these messages true?

The analysis on the academic side is a good example of how simplistic reasoning transferred out of its original context can lead to incorrect inferences. The average cost of grazing is, of course, going to be lower than the average cost of feeding hay. If it was not, we would have beef cattle penned up during the spring, summer, and fall, feeding hay rather than being out on pasture grazing.

That is all that this analysis can tell us, as the average cost of grazing was estimated for a typical grazing season, not year-round grazing. Just as fuel efficiency and response to fertilizer decline as we increase vehicle speed and fertilizer quantity, the cost of an additional grazing day will rise as we push grazing further into fall and winter. The further we push it, the higher the cost.

At some point, the cost of an additional grazing day is going to be more than the cost to feed hay, at least on most farms and in most practical situations. The only question will be: “When do we reach this point?”

On some farms, it may equate to one month of hay feeding, and on other farms it may be four months. And yes, on some farms, under very specific situations, the optimal amount of hay feeding may be zero, or something very close to it.

What is somehow ignored or not understood by the no-hay feeding advocates is that to get down to no hay feeding on a mostly perennial grass-based cattle farm, you will need a much lower stocking rate compared to, for instance, feeding two to three months of hay with the same intensity of management in both situations. There is no way around this. Yes, you may be able to find examples of two farms that have the same stocking rate, with one feeding no hay and one feeding two to three months of hay, but this does not mean that there is no stocking rate trade-off.

The farm that feeds no hay either has much better soils and/or much better management than the other farm. It is not an apples-to-apples comparison. I can take the farm that is currently feeding no hay, and by allowing for a month of hay feeding, be able to bump its stocking rate by 15% to 20%. Which of those scenarios would be more profitable?

There is not an answer that fits every situation, as it will depend on the specific circumstances of the farm. However, in the current market environment and with most hay cost scenarios, feeding for one month will generally be more profitable. The focus of a follow-up article will go into this a little deeper. For now, we will simplify and generalize to help us understand the broad concepts that will influence the optimal number of hay-feeding days.

To help with this understanding, we will start with two extreme situations for determining the optimal amount of hay feeding:

Scenario 1. Assume you have an extremely high hay cost: $150 per ton for average quality cow hay and low base profitability for the farm — 500-pound calves selling for $1 per pound. Will you want a low stocking rate and a low amount of hay feeding on this farm, or a high stocking rate and a high amount of hay feeding? Hopefully the answer is obvious: You will want to drop your stocking rate down to the point where you are feeding next to no hay whatsoever. The farm would be losing money at $1 per pound calves even with average-priced hay. We want to feed next to no hay in this situation.

Scenario 2. Now assume you have an extremely low hay cost: $40 per ton for average quality cow hay and high base profitability for the farm — 500-pound calves selling for $2 per pound. Will you want a low stocking rate and low amount of hay feeding on this farm or a high stocking rate and a high amount of hay feeding? Again, hopefully the answer is obvious: You will likely want to stock as many cows as you possibly can on this farm to take advantage of the high calf prices and low feed costs.

This farm would be money ahead with $2 per pound calves even with average-priced hay. With cheap hay, the farm is making a killing and would need to become a virtual feedlot to maximize profit in this situation.

Of course, most real-world situations will be somewhere in between these two extremes. But the point is that the most profitable hay feeding days will be driven largely by the hay cost on a particular farm, the general market conditions, and also, to a lesser degree, the overall cost structure on a particular farm.

This brings us back to Gerrish’s “Kick the Hay Habit” that popularized the no hay feeding concept. The book was published in 2010 after a string of four years where 500-pound steers were selling around $1 per pound. This is no coincidence. Think of this in the context of the two extreme situations previously presented and the resulting implications for optimal hay feeding days.

Gerrish’s broad recommendation for getting rid of hay feeding was likely spot on for that era of low calf prices. Making a very small profit per animal on a few animals would potentially have been a lot better than losing a moderate amount per animal on a lot of animals. Fortunately for cattle farmers, those low prices did not last long, although the no-hay feeding paradigm for a subset of cattle farmers has lasted through today.

I presented on the topic of most profitable hay feeding days at the Tennessee Grazing for Profit conference a few years ago, and a young cattle farmer came up to me after the presentation. He seemed confused: He had read in a grazing magazine and heard at conferences that grazing is always cheaper than feeding hay. My results contradicted the message he had heard — strive for feeding no hay on your cattle farm.

I asked him how he was going to get to the point of not feeding any hay on his farm. He said he was told to just keep grazing through the winter and to not feed hay! Compassionately, I told him that this was wishful thinking, and that wishful thinking will not provide grass for the cows to eat on a cold, windy February day. I hope he had hay in storage as a backup to his plan. One of the worst feelings you can have in the cattle business is realizing you are going to be a month short of hay in a winter when hay supplies are scarce.

Hay should not be a four-letter word. Hay should be considered a tool, and like any tool, it can be used wisely or abused. Used wisely and fed judiciously, hay allows us to have a significantly higher stocking rate than we could with no hay feeding, and, in most cases, be more profitable.

Graze as far as you profitably can into the winter, and after that point, do not feel ashamed when you start feeding hay. Laugh all the way to the bank when a fellow grazier brags that they didn’t have to feed a single bale of hay this winter. You will know better.

Stretch next year’s forage inventory Next