By Josh Gaskamp
The author is a wildlife and range consultant and technical consultation manager for the Noble Research Institute. 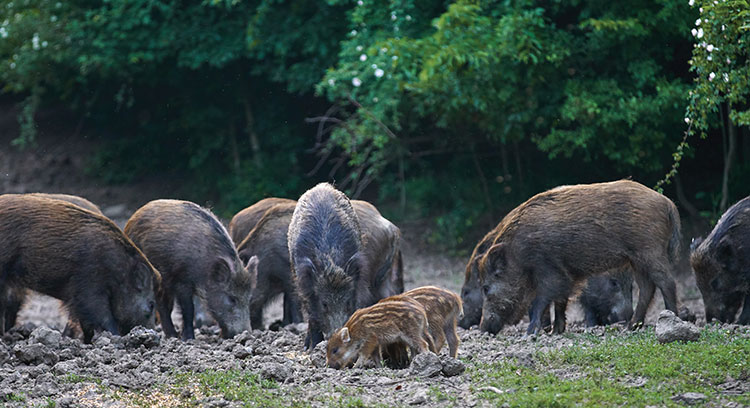 Wild pigs cause damage to both agricultural and non-agricultural lands, creating financial burdens for landowners and complicating future management. It almost seems the holes created by wild pig rooting behavior are strategically placed to inflict the most damage or pain possible to equipment and ranchers.

The best strategy is to prevent damage from occurring, but, most often, rooting damage occurs before pig presence is detected. Repairing rooted pastures isn’t something any of us look forward to, but this how-to question is common enough that we would like to share some of the strategies currently being used.

Anything with a calorie

The wild pig’s diet consists of multiple parts of plants, fungi, invertebrates, and vertebrates. They are considered opportunistic and omnivorous, meaning they will consume almost anything with a calorie. Wild pigs forage aboveground, similar to cattle, but they also forage below ground, consuming roots, tubers, and associated plant structures and insects.

You may have heard that wild pigs prefer dense brush and are only active at night. These statements are misleading. Food is actually more limited in dense brush or timber, except during the fall when acorns are falling. So, wild pigs forage mostly in grasslands or mixed environments.

Yes, wild pigs are most active around dawn and dusk, but they can be active any time of day or night, depending on nutritive requirements. Daytime temperatures and hunting pressure can influence activity periods. Wild pigs often spend a large portion of their time loafing in dense cover, mostly at midday. 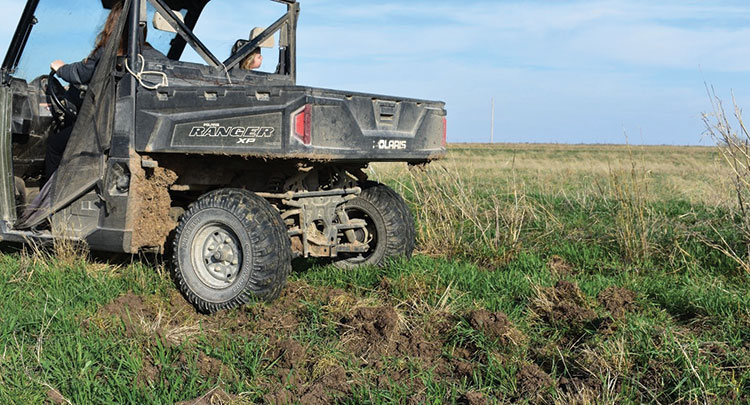 Wild pig damage in no-till wheat in a pasture of introduced forages.

There are several recommended strategies to stop or discourage wild pig damage. These include:

Choice of forage: Wild pigs are attracted to some forages more than others. When planning to plant pasture, realize that annual small grains like wheat, rye, and oats can be attractive targets for pig predation. Of the perennial warm-season plants, introduced forages, such as bermudagrass, typically receive the most damage. Introduced forages are commonly planted as monocultures, which make them very efficient for wild pigs to forage.

Wild pigs do not seem to have the same preference for most native plants. Diversity in many native systems plays a role in limiting impacts from wild pigs. In addition, most native plants have deeper rooting systems when compared to the horizontal rhizomatous structures in bermudagrass and johnsongrass. Wild pigs have an affinity for bermudagrass and johnsongrass roots in winter and spring.

Fencing: Protecting annual small grains from planting time until they have a couple inches of growth is effective in reducing their predation by wild pigs. This can be accomplished with temporary electric fencing spaced approximately 12 and 26 inches off the ground. Permanent fencing can also be used to protect pastures from pig damage.

Woven wire fencing and eight-strand barbed wire fencing have proven to reduce intrusion by wild pigs. These options should be explored where there is a recurring harvest of high-value forages (horse-quality hay) or areas that are highly susceptible to pig damage.

Trapping: Another form of protection can be the use of trapping or hunting. Currently, trapping is the most effective tool to reduce wild pig populations. When using trapping and harassment (hunting) methods, do so before planting. Employing these techniques after seed is in the ground will be less effective because pigs will have identified a dependable food source. They will revisit the field periodically and avoid times when they encounter hunters. Planted seed and bait in traps are also competing food sources for pigs. Wild pigs will almost always choose the planted food source, as entering a trap is risky.

There are several ways to repair pig damage in pastures. It is important to understand that no two damage scenarios are the same, and that an effective way to repair one pasture may be an ineffective way to repair another. There are so many variables in play, making a single blanket recommendation impossible. Forage type and biomass, soil texture, moisture, and the extent of pig damage all play an important role in selecting the right tools.

Rooting: Most often, managers see pieces of sod (vegetation, roots, and soil together) flipped over. These pieces may still be attached to adjacent earth by roots, but exposed roots are often clipped off. Soil texture will affect rooting depth. Food availability affects the extent of rooting. Rooting can be anywhere on the spectrum between an inch or less to 2 to 3 feet in depth and can be just a few small patches or acres in size. These variables also influence the preferred repair method.

Lawns: Lawns with just a few patches of flipped-over sod probably deserve the attention that a manual approach affords. Using any type of equipment on a lawn will likely cause more disturbance than using your hands or a rake to flip the sod over and place it back in the soil-exposed areas.

Pasture: Bermudagrass pasture that is grazed or cut annually for hay can be a prime candidate for deep rooting by wild pigs. This scenario is very common and one of the most difficult to repair. This repair typically needs some sort of tillage, such as disking followed by pulling a drag, chain harrow, or rock/stick rake to fill in holes and level the soil. Fortunately, bermudagrass will cover the soil quickly, as this method redistributes sprigs in filled holes.

For very large areas that must be tilled, consider planting desired vegetation afterward. Soil disturbance by wild pigs often can stimulate dormant weed seeds or leave fertile ground for seeds of undesirable or invasive plant species brought in on the pigs’ coats.

Wild pigs regularly consume small grains before or shortly after germination, causing shallow rooting damage. Pigs can smell food inches under the soil. It is incredible how a wild pig will follow the planter row, picking up individual seeds in a straight line. You can multiply that damage when a whole sounder (group) of pigs visits the field.

On pastures with conventional tillage, light tillage, or no tillage, and with limited standing forage, managers can fix wild-pig damage to ground recently sown with small grains by using a simple drag, arena drag, chain harrow, or cultipacker.

Step up your game when allocating pasture Next