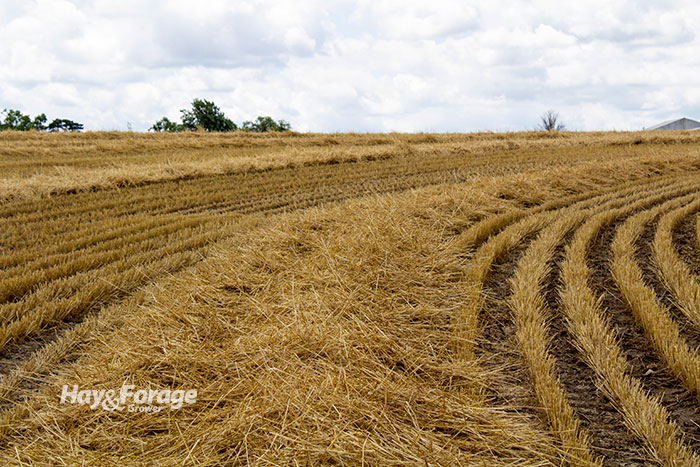 There’s something about the feeling of a freshly made bed. Livestock can attest to this, too, but their version looks more like a new layer of straw. Even though straw is supposed to keep animals comfortable, it also has the potential to make them sick.

Pierce Paul with The Ohio State University says some parts of the country are experiencing wet weather that is postponing wheat harvests. This also means producers who bale straw are falling behind, causing the quality of their crop to decline.

“Delayed baling due to excessive rainfall could cause the quality of straw to deteriorate as a result of mold growth,” the professor of cereal pathology and epidemiology explains. “Under warm, wet conditions, saprophytic fungi readily colonize wheat stubble, resulting in a dark moldy cast being formed.”

The fungus Fusarium graminearum is among one of the molds that can grow on recently rained-on straw. This fungus causes head scab and has the potential to produce mycotoxins, such as vomitoxin, that can negatively impact animal health.

Levels of vomitoxin have been shown to be much higher in straw than grain. Although straw is more likely to be used by livestock as bedding than feed, a small portion of it can still be consumed – especially by pigs.

“Depending on the production system, pigs may obtain up to 12% of their total feed intake from straw,” Paul asserts. “Pigs are particularly sensitive to vomitoxin – it causes vomiting (hence the name), feed refusal, and low weight gain.”

Found in the field

Vomitoxin is highest in wheat fields with elevated levels of head scab, whereas straw made from head scab resistant varieties of wheat typically has lower levels of the mycotoxin. Nonetheless, there are times when vomitoxin can still occur in straw from fields that are virtually scab-free.

“Scab-free fields can still be contaminated with vomitoxin, especially if it goes through repeated wetting and drying cycles before being baled,” Paul notes. “This would be even more of a problem for those fields that have not yet been harvested, as both the grain and the straw could be affected.”

No matter what the variety of wheat, Paul recommends farmers monitor the color of mold on their straw. A pinkish-white mold can indicate that Fusarium graminearum is present, which could lead to the production of vomitoxin.

Different kinds of mycotoxins can come from different kinds of mold that are just as harmful to livestock. In addition to looking for the pinkish-white colored mold, suspect straw should be sampled and tested before using it for livestock bedding or feed.