Put a stop to pinkeye 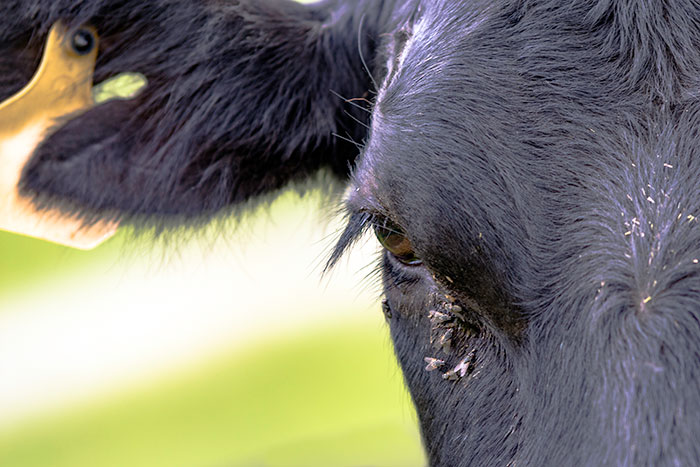 Hearing the buzz of flies is annoying to people, and cattle think so, too. But these insects can be more than just a nuisance. They have the potential to carry diseases that can threaten livestock productivity.

Flies can spread infectious bovine keratoconjunctivitis (IBK), also known as pinkeye. Wet and humid weather conditions cause fly populations to rise, which intensifies the spread of this disease among cattle in pastures.

Connor Biehler with University of Nebraska-Lincoln Extension says pinkeye cases ramp up in the spring and peak during the summer before decreasing in the fall. This disease can have major health impacts on a herd, so it is crucial to identify it and mitigate transmission.

“Pinkeye is a highly contagious disease that promotes inflammation of the cornea and conjunctiva portions of the eye,” the extension educator explains. “The severity of pinkeye ranges from mild to severe, can cause blindness if left untreated, and will likely cause significant reductions in performance of cattle.”

Calves are more susceptible to pinkeye than adult cattle. Biehler says younger animals do not have as many antibodies on the surface of their eyes to protect them. If they become infected, they can lose weight and suffer permanent scarring, making them less desirable to cattle buyers.

Once an outbreak has occurred, it can be difficult to contain. Symptoms include tearing, squinting, and blinking, which need to be addressed quickly before they draw flies and encourage disease growth in a herd.

“Face flies are attracted to the excessive tearing of the eye caused by irritation,” Biehler notes. “They then pick up the causative bacteria of pinkeye and begin transferring it to other animals, with the ability to infect several animals in the same day.”

The best way to prevent pinkeye is to control flies. Producers can utilize pour-ons, sprays, or dust bags; however, Beihler says administering fly tags is most effective. Even so, timing this practice correctly can be challenging.

An optimal time to put in fly tags is after vaccinating and dehorning cattle. But Biehler points out that this is usually at least 60 days before fly season – by the time fly populations start to climb, fly tags may no longer be effective.

To overcome this, Beihler suggests administering fly tags when giving a booster. He says many pinkeye vaccines require a supplemental shot, so putting fly tags in cattle’s ears at this time can be another option.

Other precautions can also be taken to prevent the spread of pinkeye within a herd. Eliminating seedheads by clipping pastures can lower dust levels and reduce the number of objects that damage an animals’ eyes and cause tearing. This would attract fewer flies and discourage the spread of disease.

Protecting livestock from ultraviolent light can also be beneficial. This kind of sunlight can stimulate pinkeye development, and certain breeds of cattle are more at risk of being affected than others.

“Be sure to provide plenty of shade,” Beihler asserts. “Breeds that lack pigment on their eyelids, such as Herefords and Charolais, are more susceptible to pinkeye because of an increased sensitivity to sunlight.”

Beihler also recommends producers maintain livestock health because compromised immune systems can worsen the effects of pinkeye. Make sure to discuss proper vaccine usage with a veterinarian and ensure animals’ nutritional needs are being met.

A clover quandary Next

Here’s how to boast on your oats Previous