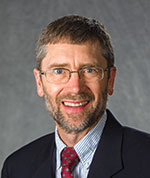 “There’s a real misconception in much of the U.S. that you can’t graze alfalfa or that grazing the legume would not be a potential first option,” Smith said. “We usually think about grazing it as maybe a third or fourth option, like after a frost or during drought stress when you don’t have enough growth to cut hay. Those are still viable options; they’re just not the only uses for the legume,” he added.

“Alfalfa is the perfect grazing crop,” Smith asserted. “It makes its own nitrogen, it’s very productive, and it has a long growing season. It has always been an important crop, or legume of choice, in pasture settings or pasture combinations with hay across the Northern Great Plains of the Dakotas, Montana, Wyoming, and up into western Canada.”

The legume’s deep root system, tolerance to drought, ability to fix nitrogen, and productivity sold those Plains farmers on the value of planting it in mixed stands since the early 1900s, Smith said.

As for the rest of the country, Smith thinks beef producers utilizing intensive forage systems and dairies moving toward total mixed rations began looking at alfalfa solely as a premium stored feed, harvested as hay and haylage.

“Alfalfa was off the radar for grazing across much of the U.S. It was more difficult to manage because it requires an average four-week rest period and rotational grazing,” he said.

But by 1990, then University of Georgia forage breeder Joe Bouton had developed Alfagraze, the first grazing-tolerant alfalfa. “Joe’s work showed alfalfa could be grazed and that varieties could be improved. But it also made people realize any alfalfa variety would survive grazing if managed properly. Grazing-tolerant varieties give the advantage of survival if you don’t manage the crop exactly right,” Smith said.

Since then, interest in alfalfa for grazing has slowly increased, particularly in the last 10 to 15 years as fertilizer prices have greatly fluctuated, he said. The trend toward organics, with USDA organic certification requiring 30% of feed intake from milking herds come from grazing pastures, also has helped.

Work on integrating alfalfa with bermudagrass “opened up options for alfalfa,” Smith said.

This work showed the legume could be used in more than pure stands in the Southeast, and as a management tool, he added. “So, by planting it with bermudagrass, you are enhancing the grass, getting higher quality, higher yield, and saving a huge amount on the nitrogen cost you have with bermudagrass, since it makes use of nitrogen alfalfa naturally fixes,” Smith said.

The updated publication also outlines the widely accepted practice of California and Arizona hay growers contracting to have sheep or goats graze dormant alfalfa fields in fall and winter. Sheep or goat producers are provided low-cost feed to fatten their animals while alfalfa growers gain weed and weevil control. The animals feed on weeds as well as alfalfa stems where weevils lay their eggs.

Smith worked with Krista Lea and Jimmy Henning, University of Kentucky; Dan Putnam, University of California-Davis; and Daniel Basigalup, INTA (Instituto Nacional de Tecnología Agropecuaria), Argentina. They greatly expanded the publication to include specific details, such as what to do if dealing with bloat and an explanation of how rotational grazing works. The opening chapter explains that other countries around the world graze alfalfa.

“With this publication, we are reminding people this is a premium crop,” Smith said. “We’re reminding them, or getting them to think for the first time, that alfalfa is also a good grazing crop. You’re not taking as many nutrients off the land, and it solves a lot of issues when we talk about summer slump with cool-season grasses. Alfalfa is the perfect choice to take care of the summer slump, and we’ve got much better disease resistance and insect resistance than we had back in the ’80s and ’90s,” he added.

The 16-page Grazing Alfalfa: Economic and Sustainable Use of a High-Value Crop is available on the alfalfa.org website for ordering or as a PDF download. • The original Grazing Alfalfa publication (left) was updated (right) to include the latest data, recommendations, and products.