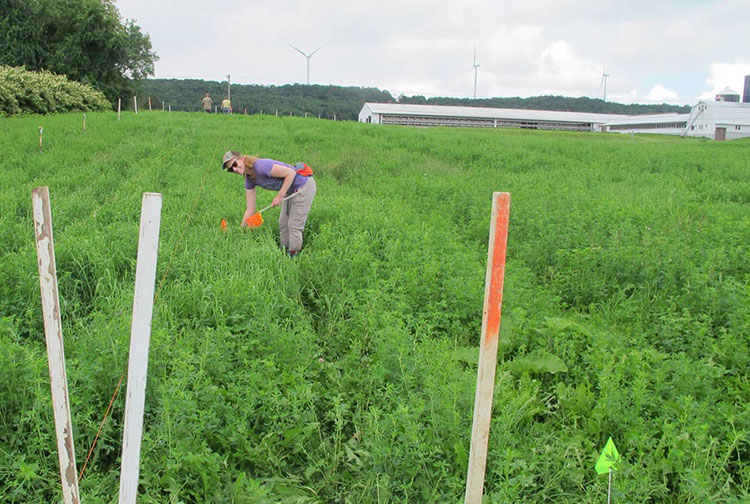 In the summer of 2021, plant breeding specialists from Cornell University collected five-year-old surviving alfalfa plants from field research plots at the Marc Laribee family's Grace-Way Farm in Lewis County. The plants are now being propagated in a Cornell greenhouse in Ithaca, New York, to develop five new populations of ASB-resistant alfalfa. They will produce seed that will become the basis of a larger field trial to develop alfalfa varieties with progressively-increasing resistance to ASB.

Two of the five populations of alfalfa established at Grace-Way Farm are advanced selections from the first NNYADP-funded ASB-resistance trials at Peck Homestead Farm in Great Bend in the 1990s. This greenhouse phase of the research also includes more recent ASB-resistance trial alfalfa populations selected from NNYADP research plots at Sheland Farms in Belleville and Limestone Ridge in Lowville.

The development of ASB-resistant alfalfa varieties is part of a two-pronged management solution developed through the long-term commitment of the NNYADP and regional farmers. The research developed original science for the use of native New York nematodes as a biocontrol application that has proven to reduce ASB populations. The combined use of the biocontrol nematodes protocol in tandem with planting progressively-bred ASB-resistant alfalfa varieties is restoring alfalfa production on northern New York dairy farms.

Make Plans Now to Attend the 2022 Symposium! Next