Be smart when buying and selling hay 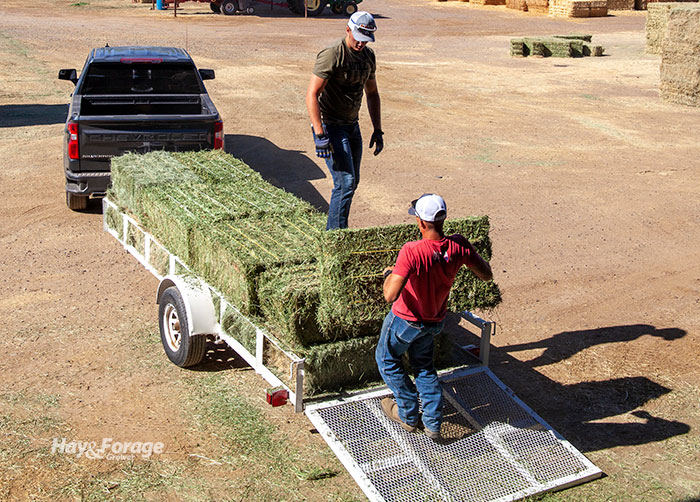 Brock Kiesler is a hay producer located in Greenville, Ind., where he farms about 450 acres of hay and row crops. Annually, he produces and brokers 50,000 small square bales, 650 big square straw bales, 300 round bales, and custom harvests another 600 round bales. He sells the small square bales in Bale Baron bundles of 21, as it allows for easier storage and loading.

Kiesler shared tips and tricks to being successful at buying and selling hay during a recent webinar hosted by Purdue University Extension.

When seeking to establish long-term customers, Kiesler believes it’s important to work on building a relationship with them. “I want my customers to know I’m more than just their hay guy,” he said. “I try to ask about things like their family and hobbies to try and build a relationship over time.”

The haymaker believes in being fair and setting specific terms, but he also likes to be flexible. Kiesler sets a base that customers need to buy at least one bundle as it isn’t worth his time to cut one open.

Kiesler said it’s important to be upfront and firm on pricing. He sets the prices for his hay based on four factors: cut, color, quality, and consistency. He prices his hay by the bale. “I try to be fair and consistent with my pricing throughout the year, not just person to person,” he said. “If you keep your prices consistent throughout the year, people gravitate toward that.”

Giving customers an opportunity to try a sample of hay before buying can be beneficial. “A bale or bundle or whatever you give them to try always makes them feel good before buying,” Kiesler said.

If a customer finds a bad spot in a bale or there is a bundle they don’t like, he offers a warranty and will give them a full refund or exchange it for other hay.

There are a variety of ways that hay can be marketed. Kiesler shared some methods he has used to market his hay and their benefits and limitations.

• Newspaper ads: This is a good option for gaining a regional audience; however, the audience is smaller and typically older.

• Word of mouth: About 80% of Kiesler’s sales are made through word of mouth. Word of mouth is a way to gain life-long customers as people are more trusting when they hear that the hay is good from someone they know.

• Local auction: The benefit of selling hay via local auction is a guaranteed sale. The downside is the hay is sold at market price.

When selling hay, knowing the target customer is essential and will affect how hay is sold. If using an ad to sell hay, it should be simple but informative. Kiesler includes information such as the forage analysis, if the hay is fertilized, the animals it is targeted for, what cutting it is, the mix of species, whether it’s stored inside or outside, and the type of packaging it is in. He includes photos that accurately show the hay.

For online ads, it is best to sell one type of hay per ad to avoid confusion. If using a business page, such as on Facebook, listing the inventory that is currently available allows for customers to see what types of hay are in stock.

“One rule of thumb to go by is to under promise and over deliver,” Kiesler said. “Don’t build up your hay to make it look like the greatest thing in the world, but be honest that it’s good hay and you haven’t had issues with it.”

In addition to selling hay, Kiesler has experience buying and brokering hay. He encouraged buyers to do a self-evaluation before buying hay to determine the feeding rate for their animals.

Kiesler said his best customers are those who can tell him what they need and are reasonable. “Buy early and establish good relationships,” he said. “Buying your hay during the summer and putting it in your barn will guarantee you have it for a cold January day when you need the hay to feed your animals. Having a good relationship means you will be high on the hay producer’s list if there’s a drought, for example, and hay is short. Then they will be more likely to make sure you’re taken care of.”

The cheapest hay doesn’t always equal the best deal. Instead, the Hoosier haymaker said to focus on finding the quality of hay you need at a fair price.

Kiesler said there are some red flags to be cautious of when buying hay, such as limited ad information, bad pictures, pressure to buy, a producer demanding immediate payment or an odd form of payment, and poor communication.

Hay stocks drop 7%; hold on for a wild ride Next

What’s that hay worth? Previous