Although logistic challenges were plentiful in 2021, hay exports during the year totaled 4.26 million metric tons (MT), eclipsing the previous record of 4.19 million MT set in 2017. For the third consecutive year and the fourth time in five years, total U.S. hay exports in 2021 exceeded 4 million MT based on data provided by USDA’s Foreign Agricultural Service (FAS). This record-setting trend continues thanks to China’s demand for high-quality U.S. alfalfa hay. 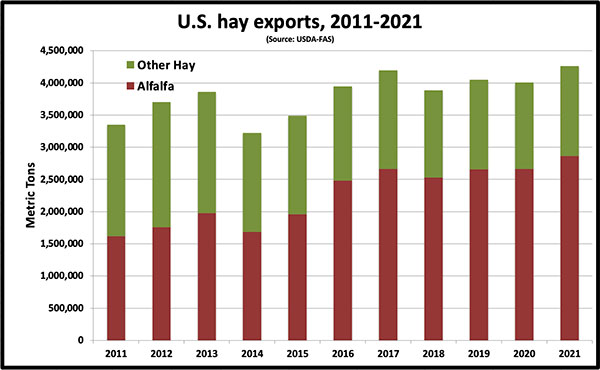 A thirst for U.S. alfalfa

With China’s growing dairy industry and their demand for high-quality alfalfa hay, that country set a new annual record for alfalfa hay imports from the United States for the second year in a row (see Figure 2). The fear that China wouldn’t return to the U.S. following some high-tariff months during 2019 certainly hasn’t come to fruition. In fact, just the opposite has occurred.

China is clearly the major driver for enhanced alfalfa hay exports and, for that matter, all hay exports. In 2021, alfalfa hay exports to China accounted for nearly 37% of all U.S. hay exports, regardless of type. This is great news for Western haymakers as long as the two trade partners remain amiable with each other and China continues to grow its dairy industry.

Concerning the U.S.’s major hay-trading partners not named China, the news is mixed. Japan, the second highest importer of U.S. alfalfa hay, finished the year by purchasing 612,692 MT of U.S. alfalfa, up 2% from 2020.

The reports heard for several years were that a phase-out of alfalfa production in Saudi Arabia to save water would result in the country being a huge importer of U.S. alfalfa. That simply hasn’t come to fruition partly due to the country sourcing alfalfa from other markets. 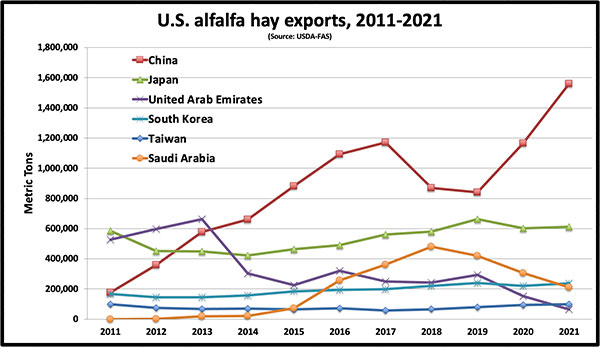 Japan leads all export partners for nonalfalfa hay. They imported 835,626 MT in 2021, 4.2% more than the previous year and the third year in a row of volume growth (see Figure 3).

South Korea, a distant second-leading importer of nonalfalfa hay, finished the year with a total of 304,410 MT, which was down 5.4% compared to the previous year, and the country’s fourth year in a row of declining grass hay imports from the United States. 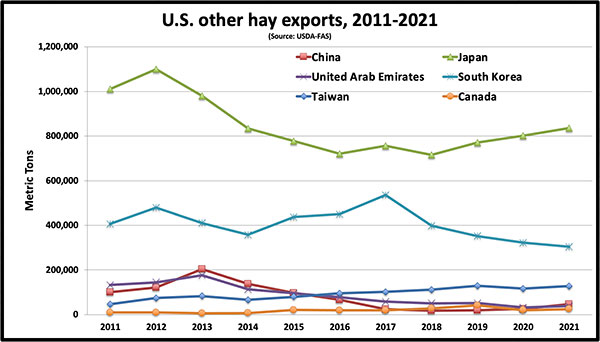 Despite a plethora of trucking and shipping problems in 2021, hay exports from U.S. ports set numerous volumetric records.

Total hay exports in 2021 exceeded 4 million MT for the fourth time in five years. This was largely due to another big jump in the amount of U.S. alfalfa hay imported by China during the year. The massive Asian country currently accounts for 55% of all alfalfa exported from the U.S.

Hay exports remain a small portion of total U.S. hay production. Based on USDA data for 2021, only 3.9% of all U.S. hay produced and 6.4% of all alfalfa hay entered the export market.

Based on USDA export and hay production data for those states, nearly 20% of their alfalfa production was exported in 2021 and 33% of the grass production found its way into shipping containers. As such, hay prices in the Western states play a large role in setting market prices.