From the mouths of bale graziers

The author is an extension agricultural economist with the University of Kentucky and a grass-finishing cattle farmer. 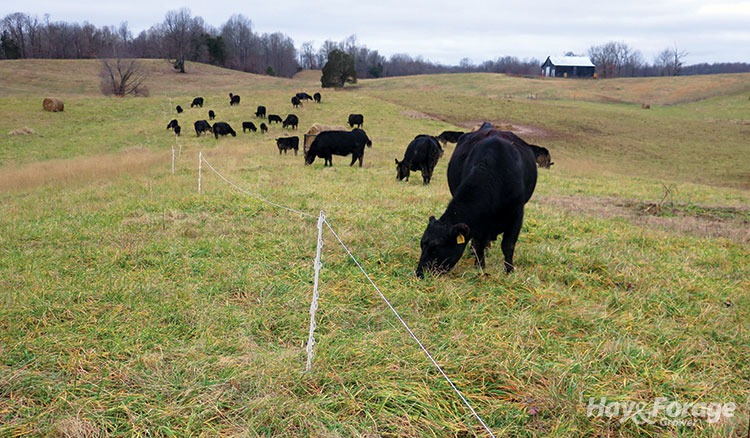 Central Kentucky farmers Dave Burge, Dorris Bruce, and Beth and Brad Hodges have made major changes to their winter-feeding systems in recent years. All three farms had been using conventional feeding approaches: a sacrifice lot, a feeding pad, and a feeding barn, respectively. These days, they are all feeding exclusively by bale grazing during the winter, even in the most inclement weather.

An important point to make is that these farms have taken the time and effort to learn how to bale graze effectively and have been guided in this process. It is easy to damage pastures in the Fescue Belt with haphazard bale grazing, as the region has numerous winter challenges. Consequently, bale grazing needs to be modified from how it is implemented in other areas. Consult the original article for these details.

Here, we will capture the experiences and thoughts of three experienced Fescue Belt farmers who bale graze.

Q – What has been your experience with pasture damage from bale grazing?

Burge: I had neighbors and peers who were confident that I was getting ready to ruin the farm. As that wet winter of 2018 to 2019 was unfolding, I was concerned, too. But as I started moving cows to fresh ground every four days, I quickly learned that the damage was minor, and the damaged areas were small. Because the damage is not deep, the ground heals rapidly. One year later, you can still tell where a bale was, but two years later, it’s almost impossible.

Bruce: During the first winter, there was some damage in close proximity to the hay rings. As the cows were moved to new bales, the ring areas were overseeded with fescue and perennial ryegrass. In late winter, red clover and annual lespedeza were overseeded into the entire feeding paddock. By May, there was no visible sign of sod destruction. The second winter was wetter than normal, and there appeared to be considerable damage. To my great surprise, by the middle of May, that pasture looked better than the areas that had not been bale grazed.

Q – How much equipment time and labor does it take to feed cattle with bale grazing?

Burge: I usually put out a month to six weeks of hay at a time. When I’m within two weeks of needing hay again, I start looking for an opportunity like a really cold morning, or when it is dry, so I don’t make any tracks in the pasture. So, probably three times a season I spend about an hour and a half putting out hay. Then every four days I spend an hour and a half moving fence and rings. With the sacrifice lot, I was spending 45 minutes every day putting out hay. There are efficiencies just built into bale grazing.

Hodges: It took about four hours to put out 68 bales in late November. Everything was prepared ahead of time so we could just focus on getting the hay out. After about a half hour, we had a good system going. We would load three bales on a trailer hooked to a pickup, and then spear two more for the tractor to take out. The bales on the trailer were chocked and then rolled off by hand, using gravity on the hilly terrain to do most of the work. While the trailer was being unloaded, the tractor would take out two bales at a time to a section of pasture close to the barn so that it could get back and have a bale ready to load when the pickup returned.

We fed about four bales at a time along with stockpiled pasture, and that would last about five to seven days. It took about 60 minutes each move to set up the new fence, roll rings, take down the old fence, and check on the cattle. Another benefit for us was the tractor time saved traveling to and from this farm since it was about 5 miles from the home farm. With bale grazing, we could just drive a pickup there. We didn’t need a tractor again on this farm until we ran out of that first batch of hay, sometime in early March.

Q – What has been your experience regarding the soil fertility aspects from bale grazing?

Burge: When I move cows off one section, it is covered with evenly distributed cow pies. What is fascinating to me is that 60 days later, they are almost all gone and incorporated into the soil. I don’t fertilize pastures anymore, and I don’t worm mature cows. The system helps promote the biological activity of bugs, worms, bacteria, and fungi that break down the manure and put it into the soil. I don’t even apply nitrogen to stockpiled fescue pastures, and I have good fall growth. That has been a real money saver.

Bruce: I was convinced to try bale grazing when I was informed that each bale grazed had a fertilizer value of $14. That first summer, I realized I had made a good management decision as there was a significant increase in the amount and quality of the pasture forages compared to areas that had not been bale grazed.

Q – What secondary benefits have you experienced from bale grazing?

Burge: That first winter people kept asking how I kept my cows so clean. It was because I was moving them to fresh sod every four days. They didn’t have time to tear things up and then lie in the mud. I think the cows’ body condition scores improved compared to the sacrifice lot I once used. I attribute this to two things. First, the clean coats allow the cows to stay better insulated, and they use fewer calories trying to stay warm. Second, they don’t have to expend as much energy getting through the mud to get to the hay. I hated the mud in the sacrifice area.

Hodges: It’s inexpensive to implement. We were already using temporary fencing, reels, posts, and solar chargers for rotational grazing, so we had most of what we needed for bale grazing. We bought four plastic hay rings, specifically for bale grazing, so we could easily flip and roll them by hand. Those cost about $1,200 total. If we added in the cost of the rotational grazing supplies, that would bring the total to around $3,000.

Pies in the pasture

For some, the benefits of bale grazing looks too good to be true, and the whole concept might seem like “pie in the sky.” However, for farmers who learn how to effectively implement bale grazing, the pie will take on a different meaning: beautiful “pies” that are evenly distributed over the pasture, enhancing fertility and pasture growth. As Dorris Bruce nicely summarized, “What is not to like about bale grazing? My only regret is that I did not start 10 years earlier.”

Summer annual forages can cure many ills Next