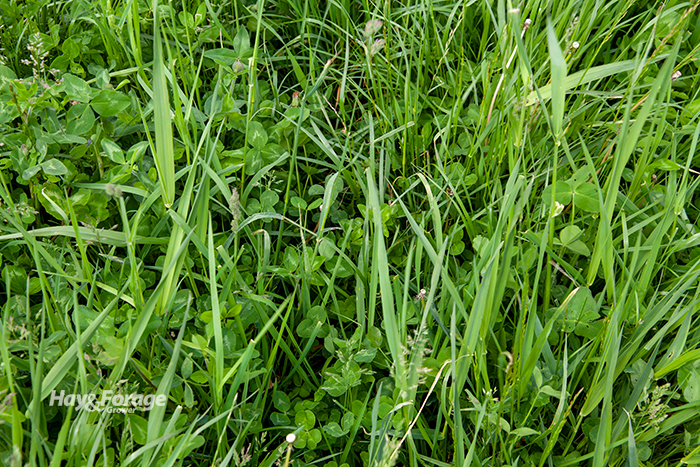 The cost of nitrogen fertilizer impacts everything from the economic optimum application rate for corn to the value of manure. With nitrogen currently fetching nearly a $1 per pound, the value of legumes has never been higher. That also means frost seeding pastures with legumes this winter and early spring has never offered more return on what little investment is required.

“The importance of legumes in grasslands has long been recognized,” explains Chris Teutsch, an extension forage agronomist with the University of Kentucky. “They bring nitrogen into grassland ecosystems via symbiotic nitrogen fixation, improve forage quality and animal performance, and dilute the toxic effects of the endophyte found in tall fescue.”

Popular pasture legumes have the potential to fix between 50 and 250 pounds of nitrogen per acre per year, although 25 to 100 pounds per acre is more likely in a pasture system where legume monocultures rarely exist. A healthy legume component, at least 30% of the stand, can maximize pasture production without the need for purchased fertilizer. That’s a big savings at current nitrogen prices.

Legumes often provide their greatest benefit in a pasture system because they are ingested by cattle and the nutrient-rich dung and urine is returned to the pasture system. Death and decomposition of the aboveground forage and belowground roots and legume nodules also contribute to the cycling of nitrogen to grasses.

If pasture legume composition is currently low, it may take some time before the full value of frost seeding legumes is realized. In this respect, it’s not like getting an immediate impact as would be the case for applied fertilizer. Many livestock producers routinely frost seed legumes on a third of their pastures each year, rotating through a cycle where each pasture is frost seeded every fourth year.

Teutsch reminds that improved legumes require good soil fertility to be productive and persistent. Seeds must also be inoculated with the proper bacterial inoculant, which vary for different species.

Legumes such as red and white clover and alfalfa require relatively high soil fertility and a soil pH above 6 to be productive. An initial fertilizer investment in potash, phosphorus, and lime sometimes need to be made before legume establishment. These applications need to be based on a recent soil test.

Although nitrogen value will be much higher this year, frost-seeded legumes also offer many additional benefits in the form of improved forage quality and animal performance.

“Grazing cows like legumes,” asserts Craig Roberts, a forage specialist with the University of Missouri. “Legumes improve digestibility and raise the crude protein and mineral content, especially calcium and magnesium.”

“Legumes extend the grazing season by growing better in late spring and summer, when fescue grows slowly or not at all,” Roberts explains. “Cool-season grasses get two-thirds of their growth in spring and one-third in fall. Legumes such as annual lespedeza fills this ‘summer slump’ gap.”

“More than 90% of Missouri fields contain toxic Kentucky 31 tall fescue,” Roberts notes. “Fescue toxicosis causes vasoconstriction, which is a narrowing of blood vessels. In summer, this causes heat to build up in an animal’s core body. In winter, blood does not flow to extremities and hooves fall off. Red clover contains compounds that open blood flow, reducing vasoconstriction.”

From south to north, frost seeding is generally done from late January through early April. Freeze-thaw cycles and exposed soil are needed to ensure good seed-to-soil contact. Red clover is by far the most popular species to frost seed, but white clover and annual lespedeza also work well. Drilling legume seeds into pastures during spring is also an option that ensures seed-to-soil contact.

“Sometimes we need to be reminded about the importance of legumes in grazing systems,” Teutsch asserts. “I cannot think of a better reminder than expensive nitrogen. Clover seed prices will likely be higher in the spring and availability may be limited. So, now is the time to make plans and gather supplies for a timely frost seeding,” he concludes.

Design a grazing cell to meet your needs Next