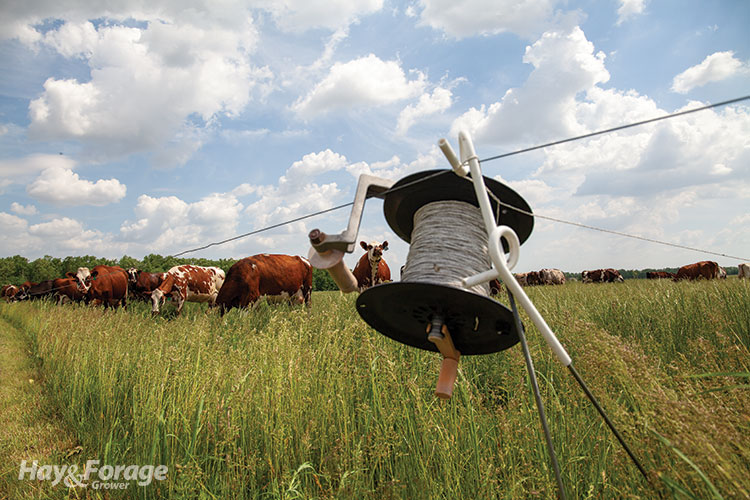 Grazing animals consume a majority of their forage intake in the early morning hours.

Hopefully, most of our Hay & Forage Grower readers in the West are aware of the nutritional advantages of cutting hay in the afternoon rather than in the early morning hours. Over the nighttime hours, plants metabolize the sugars formed during photosynthesis during the previous afternoon. The measurable digestible energy of a standing hay crop will peak in the afternoon and be lowest in the morning hours.

I think I first read about this research at least 40 years ago. Numerous studies have shown that animals can differentiate between high energy hay cut in the afternoon and low energy hay cut in the morning. Lactation trials have clearly shown a boost in milk production for cows being fed afternoon cut hay. This basic relationship between timing of hay harvest and improved individual animal performance is indisputable.

Years of experience on a mowing machine also taught me hay mows easier in the afternoon than in the morning. Hay cures more quickly when mown dry compared to being mown wet. We can mow a week’s worth of hay down in a matter of a few hours in the afternoon. It’s going to take a grazing animal all week to make that harvest.

What is open to conversation is whether moving livestock to fresh pasture in the afternoon is advantageous over moving them to a fresh paddock first thing in the morning. It has long been known that cattle do the majority of their day’s grazing within three to four hours of daylight beginning. Research over the years suggests somewhere between 50% to over 70% of daily grazing consumption occurs in this brief morning window of time. In other words, most of their daily intake occurs before the daily accumulation of photosynthetic sugars.

A grass-based dairy is about the only enterprise that has the capacity to measure immediate production response to some change in grazing practice. Most dairies move twice daily following each milking event. One of those events will most likely be in low forage-energy hours and one may occur during higher energy hours. Over the course of 24 hours, milk yield has not been consistently tied to timing of the move. Volume of the allocation and increase in total intake seem to be the driving factors for milk production.

I have a separate motivation for moving livestock first thing in the morning that is completely independent of energy content of the forage. It is simply a question of animal contentment. We have been doing daily rotation as our normal daily grazing management since 1988. I know that makes me sound like an old stick-in-the-mud who doesn’t change for anything, but there is also the old saying, “If it ain’t broke, don’t fix it.”

In these larger paddocks where the stock are returning to a tank, by moving the animals first thing in the morning, I can observe them throughout the day. If by late afternoon 80% of the cattle are still on the strip I gave them in the morning, they are telling me that it’s still the best bite of feed in the paddock. If, however, 30% or more are scattered back over the previously grazed area, they are telling me I did not give them enough feed that morning. I can either give them an additional strip at that time or plan to offer a larger allocation the next morning.

The animal’s grazing day is a sequential event, unlike a mowing machine. I can make adjustments in feed allocation as necessary based on observation through the day as long as I have left the animal’s day intact.

This article appeared in the March 2022 issue of Hay & Forage Grower on page 12.

The good, bad, and ugly of spring grass Next

Design a grazing cell to meet your needs Previous