The author is a freelance writer who lives in Brookings, S.D. She was raised on a cattle ranch near Spearfish, S.D., and earned an agricultural communications degree from South Dakota State University. 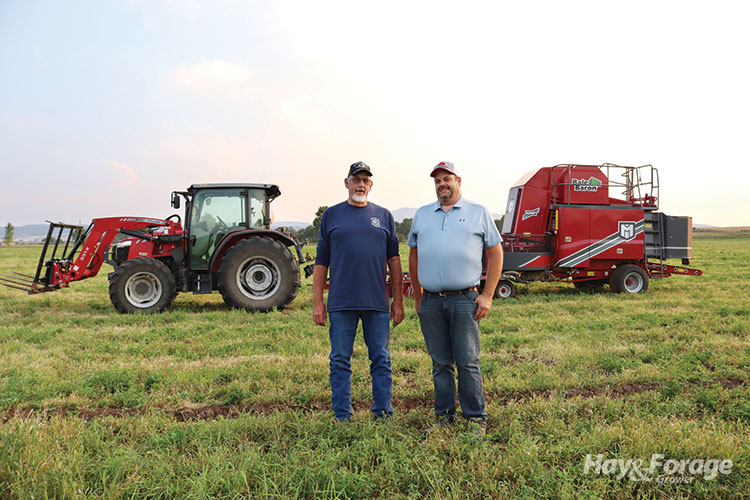 Mike and Curtis McGuigan make small square bales that are mostly sold to local hobby farmers. They bundle and sell their hay in Bale Baron packages of 21.
Sydney Meyer

Realizing a need for small square bales caused Curtis McGuigan to shift gears on more than just his tractor, and as a result, business is booming. McGuigan was making big square bales and shipping them to Texas until he decided to try something new and started making small square bales that he packaged in bundles of 21.

Now he is selling most of the hay bundles in his community as fast as he can make them.

McGuigan is the fifth generation working on his family’s farm located just outside of Spearfish, S.D., where he and his dad, Mike, operate around 2,000 acres of owned and leased land. About half of the land is hay ground where they grow a mix of alfalfa, orchardgrass, and timothy that is made into small square bales. The remaining acres are rented out as pasture.

The farm was homesteaded in 1909 and the family milked dairy cattle until selling the herd in 2001. McGuigan and his dad then raised beef cattle for several years until converting to hay production in 2012.

“In 2011, I bought a big square baler because I foresaw a high demand for hay in Texas due to the drought,” McGuigan said. “I shipped a lot of alfalfa to Texas that year. Then we decided to sell the beef herd the next year and went strictly into hay production because the demand for hay really took off.”

After sending his hay to Texas for several years, he decided it was time to try something new. In 2016, he purchased a Massey Ferguson 1840 small square baler and a Bale Baron bundler. He started making 50 to 60-pound alfalfa small square bales and packaging them in bundles of 21 that he shipped to racehorse owners in Kentucky. Within the last couple years, the demand for small square bales in his own community grew drastically, and he started selling more and more bundles locally as well.

“Now, the local demand for our hay is so high that we sell most of it around here rather than shipping it across the country,” McGuigan said. “When I have the supply, I will send hay to Kentucky, Texas, and Florida, but the local demand has been growing so much that I just don’t typically have enough to send to other states.”

Shift with the market

Most hay producers in his area make round bales, so he found a niche that has become a profitable enterprise. He has found success using a business Facebook page to market his hay and grow a strong customer base. Most of the hay is sold to local hobby farmers and horse owners who get one or two bundles about every other week.

“When I brought home the bundler, I think many of our neighbors thought I was crazy, but I like to keep people laughing at me because I’m always trying something new and doing something different than everyone else,” McGuigan said. “Being willing to adapt and try new things has really paid off for us.”

According to McGuigan, his local customers prefer grass hay over alfalfa. As a result, he is in the process of transitioning fields to grass by interseeding timothy and orchardgrass into existing alfalfa stands. The goal is to extend the productive stand life by interseeding the grass. Prior to beginning this transition, the fields were on a six-year rotation with corn or wheat.

About 300 hay acres are irrigated using both a pivot and pipe irrigation. Due to drought last year, he only harvested hay from his irrigated acres, which cut his normal annual production by about 25%. Typically, he gets four cuttings from his hayfields. The first cutting is made in the first week of June, and the latest the hay is cut in the fall is the first week of September. A neighbor cuts the hay for him, but McGuigan does the raking, baling, and bundling.

His ideal baling time is between 10 a.m. and 2 p.m. “I strive to bale at 16% moisture,” McGuigan said. “I check the stems, and when those feel right, I have several moisture probes that I use to check the bales.”

He sends in samples of the hay to be tested and aims for a relative feed value (RFV) of 180 on the second and third cuttings. If the hay becomes too bleached or is too dry, he will make it into big square and round bales and sell them in the beef cattle market.

Fertilizer is applied in the spring, and McGuigan takes soil samples each fall to determine what is needed the following year. The primary pest issue is alfalfa weevil, so he makes the first cutting early in June with the goal of getting the forage off before damage becomes too severe. If needed, he sprays to control any pest or weed pressure.

McGuigan converted his family’s old dairy barn to hay storage when he started making small square bales. “The shed will hold about 1,000 bundles, and I try to fill it each year,” McGuigan said. “Having shed space for storing the bales is key to the success of our operation.”

One of his biggest challenges is making hay that his customers want. “Everyone’s opinion on good hay is different,” McGuigan said. “Growing up in the dairy business and making hay for ourselves, I always knew the quality of our hay based off the test results. The tests tell you the right answer about quality. However, for our customers to buy our hay, it also needs to be visually appealing.” 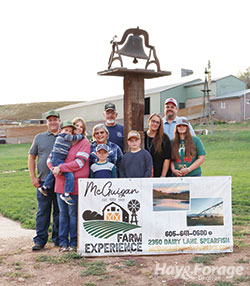 The McGuigan family started the McGuigan Farm Experience last spring to educate local consumers on agricultural production. The experiences range from farm tours to campfire talks.
Sydney Meyer
The family recently added a new enterprise to their operation that is focused on helping consumers learn more about agriculture. This spring, the family started an educational agricultural experience on the farm, called the McGuigan Farm Experience.

“There are a lot of people who are now several generations removed from the farm, so we are trying to give people a first-hand look at where their food comes from,” McGuigan said.

They kicked off the new venture by hosting four campfires on their farm throughout the summer, which included educational talks by local producers. The campfire talks covered beekeeping, the farm-to-table process, the irrigation system in the valley, and canning and preserving food. They also have a farmyard with a variety of animals for visitors to interact with.

Farm tours are another experience they offer. People ride around the farm on a bus and get a firsthand look at what is being done in the field, whether it is irrigating, cutting, baling, or some other activity. They also offer the opportunity for people to spend the day working alongside the farm team to get a hands-on experience of what’s involved in making hay.

McGuigan continues to demonstrate that being willing to change and adapt to markets is a characteristic needed for long-term farming survival. When others were trading in their small square balers for larger package units, the McGuigans saw an opportunity to do the opposite. That decision has paid them bundles of dividends.

Worming their way to better hay Next