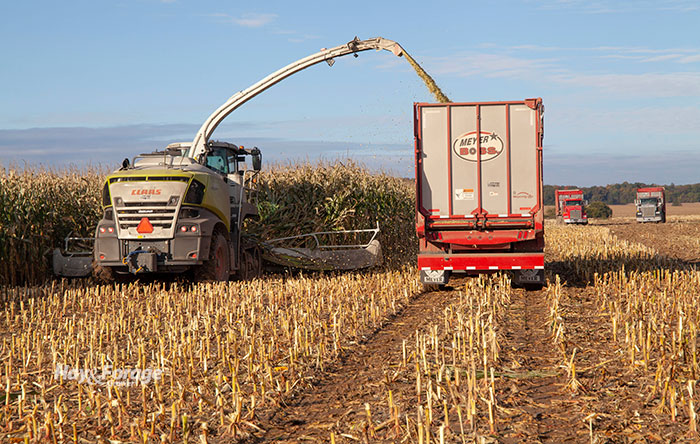 Corn silage production continues to trend higher in the United States. The crop offers high yields, high energy, and high fiber digestibility, while only requiring one harvest per year. Still, despite its popularity, corn silage quality is never guaranteed.

Bill Mahanna, global nutritional science manager for Pioneer, recently presented a lecture on this topic at Iowa State University. He addressed the environmental factors and management practices that can influence corn silage production.

Fiber digestibility, on the other hand, is less important to hybrid selection. Mahanna said this trait shows little genetic variability among standard hybrids. Instead, fiber digestibility is influenced approximately three times more by the growing environment than genetics.

Mahanna also noted that brown midrib silage hybrids offer higher fiber digestibility than standard hybrids. These crops have less lignin in their cell walls, making it easier for animals to consume greater amounts of forage. Nonetheless, moisture conditions during the vegetative stage have similar effects on the quality of brown midrib hybrids.

Although producers can’t control the weather, they can use this information to their advantage. For example, high-chopping corn silage in a wet year that is predicted to have lower fiber digestibility would reduce the amount of stover material in a harvest and improve the overall quality. Farmers who expect lower-quality corn silage can also plan on purchasing supplemental feed.

Fiber digestibility is determined by the time crops enter the reproductive stage; however, these values can decline if plants are subject to disease. Mahanna said using fungicides can promote late-season plant health, which will also widen the harvest window and encourage better grain fill.

Unlike fiber digestibility, plenty of moisture is required to maximize starch content and energy density in corn silage. As harvest season approaches, monitor kernel maturity and whole plant moisture to determine when to chop.

“When you harvest too early, the plant is still laying down a lot of starch, and you’re giving up a lot of yield,” Mahanna asserted. “We recommend harvesting plants at 66% to 68% dry matter, which corresponds to about 3/4 milkline.”

Chop length and kernel processing are also critical to capturing corn silage quality. Mahanna said long particles of forage have been shown to extend livestock feeding time without providing additional rumen stimulation. He suggested a chop length between 19 to 24 millimeters is ideal. Furthermore, kernel processing will essentially kickstart the digestion process, which will also enhance the feed efficiency.

During the lecture, Mahanna emphasized that fiber digestibility does not change during storage, but starch digestibility does. When corn silage is ensiled, zein proteins that cover starch granules are degraded by bacteria involved in fermentation. This allows starch to be more accessible to animals’ rumen bacteria.

To facilitate proper fermentation, pack corn silage densely in a silo, bunker, or bag to exclude oxygen, and consider investing in an oxygen-barrier film for added protection. Applying inoculants that contain strains of Lactobacillus buchneri can also safeguard corn silage quality by helping to maintain a low pH and inhibiting yeast growth.

“The problem with corn silage from a fermentation standpoint is yeast,” Mahanna stated. “When yeasts multiply, they begin eating the most valuable portions of silage. They aren’t eating the fiber – they are eating the starches and sugars.”

Yeast growth can also be prevented during feedout by “facing” corn silage piles and leaving a clean, level surface. Mahanna said this will reduce amount of material that is exposed to oxygen, and it will provide a more consistent diet to animals as opposed to removing silage from one discrete area.