The author is a recently retired professor and agricultural engineer from the University of Wisconsin-Madison. 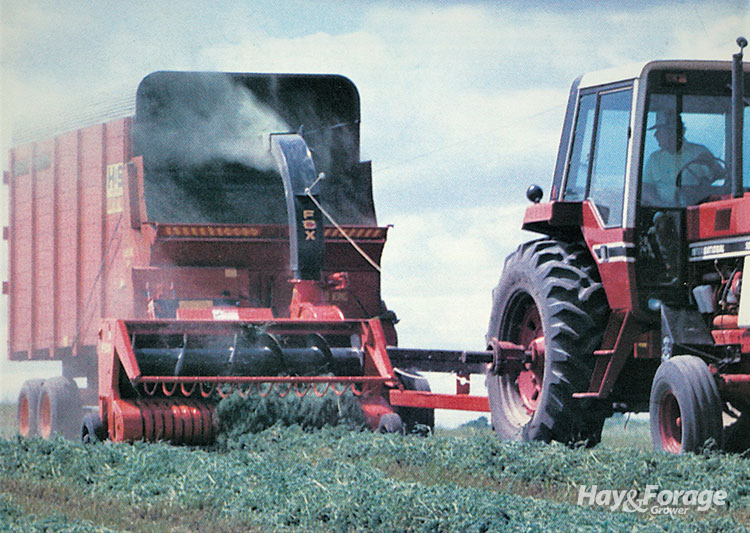 Pull-type forage harvesters dominated how silage was chopped in the 1980s.

Editor’s note: Kevin Shinners has been an influential voice, inventor, and researcher during his 40-year career at the University of Wisconsin-Madison. Here, he looks back and chronicles the changes in forage equipment that have taken place during his career while also eyeing the future.

In many ways, hay and forage equipment remains fundamentally the same as when I began my career 40 years ago, but today, equipment is more sophisticated, intelligent, and productive. In the next 40 years, engineers will continue to pursue new machine forms and adopt technologies to make hay and forage harvesting even more efficient and productive. 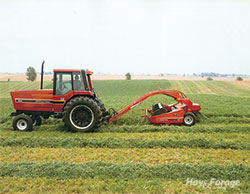 A typical sickle mower-conditioner from the early 1980s.
The biggest change has been the shift from sickle to disc cutterbars. Throughout the 1980s and 1990s, there was a steady move toward disc cutterbars. Now, sickle cutterbar machines are almost extinct. Much greater productivity has more than offset the greater expense of the disc mower-conditioners. End-wise transport now facilitate cutting widths up to 20 feet.

In 1981, windrowers had less than 80 horsepower (hp) and a conditioner and cab were not even standard. Today’s windrowers exceed 200 hp and can easily cut up to 20 acres per hour. Tractor-mounted, wide-area mowers now offer cutting widths in excess of 34 feet and can harvest over 35 acres per hour — more than four times the typical productivity of a windrower from 1981.

Guidance systems on tractors and windrowers have helped reduce fatigue and improve efficiency. Mower-conditioners are good candidates for autonomous operation, so we could see fleets of smaller width, electrically driven, autonomous mower-conditioners in the future.

Slow, inconsistent drying continues to frustrate hay producers. Despite much development effort, engineers have never been able to make substantial improvements to conditioners and hay drying. Current development efforts to enhance drying rates are limited, so we likely won’t see major improvements in this area in the near future.

Forage harvesters still perform the same basic machine functions as 40 years ago, but the market has strongly migrated from pull-type to self-propelled machines. In 1981, there were nine manufacturers of pull-types, and now only two manufacturers remain. Self-propelled harvesters have grown immensely in size and complexity. The largest machine in 1981 had 325 hp and could harvest six rows. Current machines approach 1,000 hp and can harvest up to 12 rows.

The introduction of the kernel processor (KP) in the late 1990s was a game changing development. This mechanism enhanced ruminant starch utilization and allowed longer length-of-cut to enhance effective fiber from the stover fraction. There is no doubt that the KP helped accelerate the greater use of corn silage in the dairy ration.

Forage harvesters have not only increased in size but also sophistication. Near infrared reflectance spectroscopy (NIRS) technology now provides on-board accurate estimates of moisture content and forage constituents. Combined with mass-flow sensing, forage yield maps are possible. Bacterial inoculants can be accurately applied to enhance fermentation. Sensors and controls now guide the machine path and direct the spout to uniformly fill the transporter. None of these technologies were remotely possible in 1981.

Since forage harvesters unload continuously, autonomous harvesting will be challenged by the need to manage both the harvester and the continuous fleet of transporters that also need to be moved from field to storage via roadways. Improved fiber digestion from advanced processing systems is being investigated, which could fundamentally change how forages are harvested.

In 1981, the tower silo dominated the way we stored ensiled forages and there were an amazing 16 manufacturers selling forage blowers. Today, many tower silos stand as empty monuments to a bygone era. Bunk and bag silos dominate because of greater productivity at filling, lower capital and operating costs, and less daily aggravation. These storage systems helped expedite the adoption of the total mixed ration (TMR) system, perhaps the most important change in dairy nutrition in the last 40 years.

In 1981, baling was dominated by the small square baler (SSB). Large round balers (LRB) were beginning their ascendancy, and the large square baler (LSB) had only recently been introduced. There was a strong move to the LRB as manufacturers of loose hay stacking wagons declined to five and sellers of LRB climbed to 13. Today, the SSB is mainly used to make hay for the equine and export markets, and the manufacture of loose hay stacking wagons has vanished. The dominant way hay is packaged today is with the LRB.

Net wrap became widely available in the 1990s, and this development greatly improved productivity and reduced storage losses. Precutters now allow size reduction at baling, which enhances feeding and mixing. Most of our harvest machines have grown in size, but surprisingly, LRB bale size has not changed at all. We still use 4 or 5 foot wide and 4- to 6-foot diameter bales, the same sizes offered 40 years ago. Bale size has a large impact on the cost of gathering, storing, and feeding hay, so it is possible that new LRB sizes could be coming.

A major shift in hay packaging was the adoption of the LSB. The development of the intermittent feeder and double knotter were game-changing technologies that helped make these machines possible. Interestingly, offering smaller bale sizes — from the initial 4x4 to the 3x4 or 3x3 — helped spur greater use of the LSB. Steam application now allows hay producers in arid regions to bale even when dew is not present.

Wrapping and fermenting baled silage was virtually unheard of in 1981. But baleage is common now in response to producers’ desire to reduce the time between cutting and baling and their frustration with slow drying.

Non-stop round baling has been a Holy Grail for baler manufacturers for decades. Although a few such machines are now offered, they have not been widely adopted. Tractor-implement automation and a host of productivity improvements have reduced the demand for a nonstop baler. Self-propelled machines lend themselves to autonomous operation, but currently only one such baler is offered in the U.S. Autonomous bale gathering and staging may be more widely adopted before autonomous baling.

Side-delivery and wheel rakes dominated the way we windrowed hay for chopping and baling in 1981. Although wheel rakes remain popular due to their low cost and simplicity, side-delivery rakes are fading in importance. Mergers were unheard of in 1981 because they were unnecessary for the low-capacity pull-type harvesters that dominated chopping. It would have been unthinkable to produce the windrows that consolidate 30-, 60- or 90-feet of material that are used to satisfy the appetite of today’s large self-propelled harvester. Rotary rakes and tedders first developed in Europe are now common ways to improve drying rates and windrow crops.

Lost along the way

Systems that were in-practice in 1981 but have greatly faded include alfalfa dehy, in-field alfalfa cubing, in-barn bale drying, and loose hay stacker wagons. Some technologies promised great changes — like the rapid-hay drying maceration and mat formation system and the International Harvester alfalfa juice Probine system — but were unable to overcome technical and economic hurdles.

Electro-hydraulic controls, engine load management, on-board moisture and constituent sensors, machine guidance, yield mapping, and inoculant application are just some of the technologies that have made equipment more productive, intelligent, and efficient. Application of these technologies is one reason why machine costs have risen greater than the rate of inflation (Table 1). 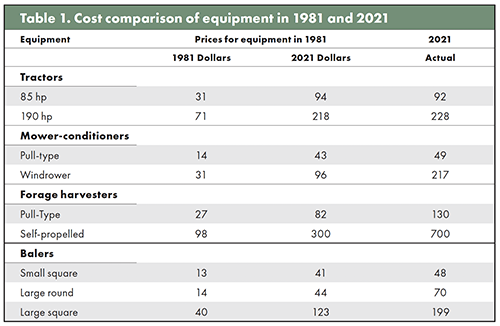 Tires make a difference in alfalfa fields Next