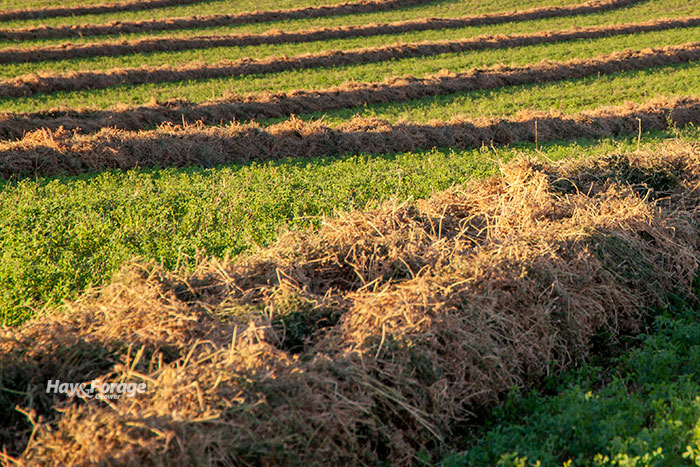 Everybody has a nemesis, something that seems to screw up the plan of action more often than not. For the haymaker, that curse-worthy adversary is often cited as rainfall. What’s interesting is that for some the problem is too much or too often, and for others, it’s not enough. Also, the problem can flip from year-to-year or within the same year.

With a lack of rain, at least forage quality is often an attainable outcome; however, too much or too often can often turn perfectly good forage into cordwood. Beating Mother Nature is a never-ending confrontation for the haymaker on many fronts, but having high-quality hay rained on that is already cut and wilting in the field is perhaps the most disheartening.

The often-asked question in the hay business that keeps people up at night, even after an 18-hour day, is: “Do I cut now and risk getting it rained on, or do I watch the forage quality decline daily in the field as I wait out a harvest window?”

The answer differs depending on the situation. There are some producers who will avoid rained-on hay at all costs; others are more prone to gamble, knowing that is the only road that leads to a possible high-quality hay outcome.

The science of rained-on hay is an interesting one, and there have been numerous studies to document what happens when a field of cut forage gets power washed. The carnage that results for both yield and quality is highly dependent on how dry the forage is when the raindrops fall, the amount of rain, and the rain event duration.

Having the first cutting rained on as it lays helplessly in the field is especially hard to endure because it often holds the greatest potential for high yields and the best forage quality of the season, at least in terms of energy and digestibility.

• Leaf shattering in the case of legumes. If not directly from the rain, it often occurs from the additional mechanical manipulation (raking and tedding) that is needed to reboot the drying process.

Though not always as noticeable as forage quality, rainfall that occurs during the wilting process often reduces dry matter yield. There are three primary mechanisms at play.

First, rain that occurs relatively soon after cutting may prolong plant respiration, which results in highly digestible carbohydrates (sugars) being lost. If the forage is wilted below about 50%, which is when respiration normally all but ceases, then research has shown that rewetting can cause plant respiration to reactivate, furthering the loss of nonstructural carbohydrates.

Rain can also simply cause the leaching of carbohydrates out of plant tissues. The same occurs with some minerals such as potassium. Finally, dry matter losses occur simply from the loss of leaves caused by subsequent mechanical manipulation to get forage dry enough to bale.

In an early Wisconsin study, dry matter losses from rained-on hay totaled 22% when alfalfa was exposed to a 1-inch rain after one day of wilting.

In a Michigan trial, maximum dry matter losses were reported at 34%. In a second trial, the rainfall amount was kept constant at about 3/4 inch but spread over periods from one to seven hours. The dry matter yield losses ranged from 6% to 12% with the greatest loss occurring when the rain was spread over the longer duration.

With the loss of soluble carbohydrates through respiration and leaching, the percentage of structural carbohydrates (fiber) becomes greater. This results in a higher percentage of neutral detergent fiber (NDF), lower fiber digestibility (NDFD), more ash, and a lower relative forage quality (RFQ).

When forage is chopped for high-moisture feed, rainfall that occurs during the wilting process may negate its potential fermentation qualities. This is especially true for alfalfa that has been exposed to multiple rain events over an extended period. In such cases, there are greater amounts of sugars and starches lost that would normally act as substrate for lactic acid-producing bacteria during fermentation.

Most forage experts highly recommend using a bacterial inoculant for forage that is rained on during wilting. Rain-damaged forages are also more prone to clostridial fermentations that yield ammonia and butyric acid as end products.

The impact that rain has on forage quality and yield is well documented, but this doesn’t make the decision of whether to cut or not any easier. Fortunately, the present-day weather prediction models continue to get better. Even so, they can only predict rather than stop or start the rain.

Hay stocks drop 7%; hold on for a wild ride Previous