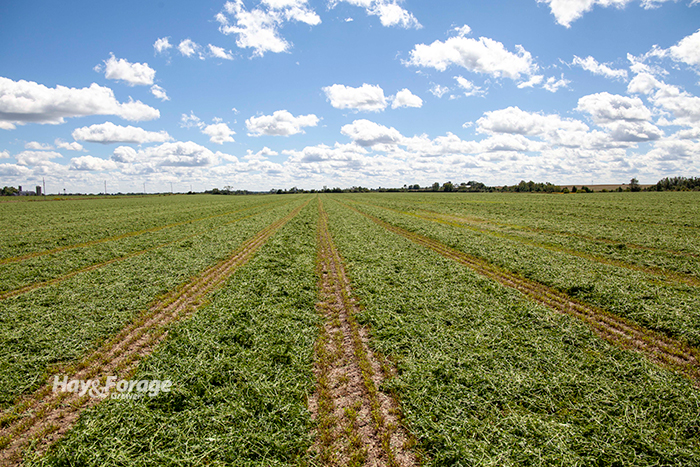 As many readers know by now, I spent most of my adult life as an extension agronomist in a dairy-dominated Wisconsin county. That career started in the late 1980s when there were still mostly small, single family dairy farms with cows housed in tie stall and stanchion barns.

Most farms had their own pull-type chopper and several silage wagons. Hay crops (mostly alfalfa) were stored in tower silos, many of which have long been abandoned and stand majestically empty.

In those days, labor was largely provided by immediate family members with assistance from part-time high school help. Young children rode in either the chopper or wagon tractors beginning in their early months of life. My point is that the labor force was generally limited, and anything that could be done to save time and work hours usually was because the days were already long enough.

One of the labor-saving practices put in place by almost all farms was to cut hay into a windrow that was no wider than the pick-up width of the chopper head. This actually offered two advantages: It eliminated an extra trip across the field with a rake, saving labor, and no precious alfalfa leaves were lost from mowing to chopping. Keep in mind that, in those days, chopper heads weren’t nearly as wide as they are today.

After a couple days or more of drying, those narrow windrow swaths would be bone dry on top, moist in the middle, and still green as the day they were cut on the bottom. Chopped and mixed together, the overall moisture was about right. If they got rained on . . . well . . . that was another story.

In the early to mid-2000s, the benefits of wider swaths (80% of the cut width) were explored by researchers in New York, Wisconsin, and other states. Both more rapid dry-down rates and improved forage quality from reduced plant respiration were documented. Wide-swath haymaking also reduced the chances of getting a crop rained on before harvest.

Initially, implementation of the wide-swath approach was held back by a lack of cutting machines that could meet the 80% cut-width threshold. Farms were getting bigger — and so was the equipment. Still, many farmers were now leaving swaths as wide as possible to obtain more uniform drying.

Tedders, wider harvester pick-ups, mergers, and triple mowers began hitting the market to aid in the easy implementation of wide-swath haymaking. These days, wide swaths, formed with or without a conditioner, are the standard for making haylage and, in some cases, dry hay. It has been a major forage industry change over the past 10 to 15 years.

As a farm journalist, I now have the opportunity to visit farms across the U.S. I’m always intrigued by how people make hay and why they do the things they do. Although wide swaths are commonplace, especially where the crop is being chopped, not all dry hay producers are on board, which at first glance seems counterintuitive because the crop has to lose more moisture.

So, what reasons have I heard for not wide swathing?

In the arid and semi-arid West, where color is a big deal in the horse and export markets, wide swaths are subject to extreme bleaching. That is a deal-breaker for many producers and buyers. Of course, rain events are much less of a concern and the dry air allows for quick moisture loss. Often, getting dew or moisture back into the hay is the problem.

The arid West is easy enough to understand, but what about those haymakers in the more humid regions who shun the wide swath? These folks are dealing with the same frequent rain events as their chopping counterparts.

The Number 1 reason I get from these haymakers for making something less than a wide swath is that they want enough room between swaths to allow the soil surface to dry off. It’s in this area that the swath will be moved to finish drying, and they don’t want soil moisture to wick back into the hay.

Different swath widths work for different folks. For those making haylage, there’s no question that a wide swath will offer the advantage of a faster dry-down rate with potential forage quality enhancements. It’s a slam-dunk option, but don’t “out mow” your capacity to chop and fill silos, or the forage will get too dry.

Dry hay producers may have good reasons for narrowing swaths to either avoid bleaching, which is a market-driven response, or to allow for soil surface drying.

Regardless of what swath-width camp you fall into, have a good reason for doing what you do.